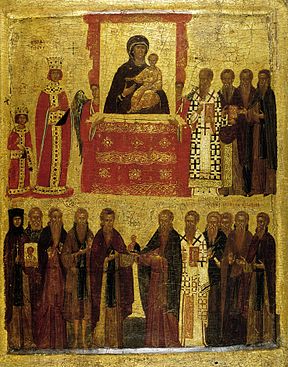 Iconoclasm[Note 1] is the destruction of religious icons and other images or monuments for religious or political motives. In time, the word, usually in the adjectival form, has also come to refer to aggressive statements or actions against any well-established status quo. It is a frequent component of major political or religious changes. The term does not generally encompass the specific destruction of images of a ruler after his death or overthrow (damnatio memoriae). The destruction of religious icons by a group with another religion or culture is not considered iconoclasm.

People who engage in or support iconoclasm are called iconoclasts, a term that has come to be applied figuratively to any individual who challenges "cherished beliefs or venerated institutions on the grounds that they are erroneous or pernicious".[1] Conversely, one who reveres or venerates religious images is called (by iconoclasts) an iconolater; in a Byzantine context, such a person is called an iconodule or iconophile.

Iconoclasm may be carried out by people of a different religion, but is often the result of sectarian disputes between factions of the same religion. In Christianity, iconoclasm has generally been motivated by people who adopt a literal interpretation of the Ten Commandments, which forbid the making and worshipping of "graven images or any likeness of anything".[2] The Church Fathers identified Jews and Judaism with heresy. They saw deviations from Orthodox Christianity and opposition to the veneration of images as heresies that were essentially "Jewish in spirit".[3] The degree of iconoclasm among Christian branches greatly varies. Islam, in general, tends to be more iconoclastic than Christianity, with Sunni Islam being more iconoclastic than Shia Islam. 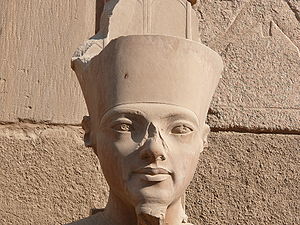 In the Bronze age the most significant episode of iconoclasm in Egypt was during the Amarna Period when foreign Hyksos rulers, chiefly Apophis and Akhenaten, based in Memphis and Avaris, instituted a campaign of intolerance towards indigenous gods (monotheism) and many temples and monuments were destroyed.

"In rebellion against the old religion and the powerful priests of Amun, Akhenaten ordered the eradication of all of Egypt's traditional gods. He sent royal officials to chisel out and destroy every reference to Amun and the names of other deities on tombs, temple walls, and cartouches to instill in the people that the Aten was the one true god."[4]

"For Egypt, the greatest horror was the destruction or abduction of the cult images. In the eyes of the Israelites, the erection of images meant the destruction of divine presence; in the eyes of the Egyptians, this same effect was attained by the destruction of images. In Egypt, iconoclasm was the most terrible religious crime; in Israel, it was idolatry. In this respect Osarseph alias Akhenaten, the iconoclast, and the Golden Calf, the paragon of idolatry, correspond to each other inversely, and it is strange that Aaron could so easily avoid the role of the religious criminal. It is more than probable that these traditions evolved under mutual influence. In this respect, Moses and Akhenaten became, after all, closely related."[5] 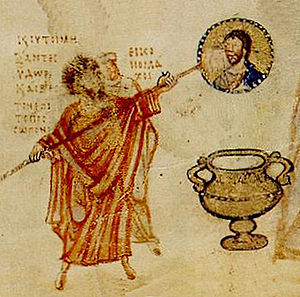 Although widespread use of Christian iconography only began as Christianity increasingly spread among gentiles after the legalization of Christianity by Roman Emperor Constantine (c. 312 AD), scattered expressions of opposition to the use of images were reported (e.g. Spanish Synod of Elvira). The period after the reign of Byzantine Emperor Justinian (527–565) evidently saw a huge increase in the use of images, both in volume and quality, and a gathering aniconic reaction.

In the Eastern Roman (Byzantine) Empire, government-led iconoclasm began with Byzantine Emperor Leo III, following what seems to have been a long period of rising opposition to the use or misuse of images. The religious conflict created political and economic divisions in Byzantine society. It was generally supported by the Eastern, poorer, non-Greek peoples of the Empire[7] who had to deal frequently with raids from the new Muslim Empire. On the other hand, the wealthier Greeks of Constantinople, and also the peoples of the Balkan and Italian provinces, strongly opposed iconoclasm.[8]

Within the Byzantine Empire the government had probably been adopting Christian images more frequently. One notable change came in 695, when Justinian II's government added a full-face image of Christ on the obverse of imperial gold coins. The change caused the Caliph Abd al-Malik to stop his earlier adoption of Byzantine coin types. He started a purely Islamic coinage with lettering only.[9] A letter by the patriarch Germanus written before 726 to two Iconoclast bishops says that "now whole towns and multitudes of people are in considerable agitation over this matter" but there is little written evidence of the debate.[10] 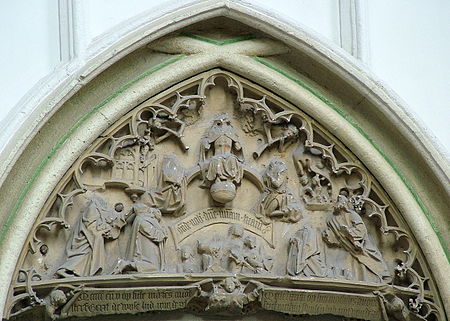 16th-century iconoclasm in the Protestant Reformation. Relief statues in St. Stevenskerk in Nijmegen, the Netherlands, were attacked and defaced in the Beeldenstorm. 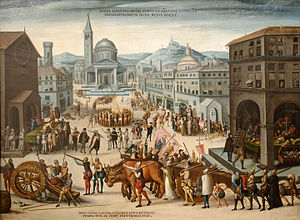 Looting of the Churches of Lyon by the Calvinists in 1562 by Antoine Caron.

Destruction of religious images in Zurich, 1524

Some of the Protestant reformers, in particular Andreas Karlstadt, Huldrych Zwingli and John Calvin, encouraged the removal of religious images by invoking the Decalogue's prohibition of idolatry and the manufacture of graven (sculpted) images of God. As a result, individuals attacked statues and images. However, in most cases, civil authorities removed images in an orderly manner in the newly reformed Protestant cities and territories of Europe.

Significant iconoclastic riots took place in Zurich (in 1523), Copenhagen (1530), Münster (1534), Geneva (1535), Augsburg (1537), Scotland (1559), Rouen (1560) and Saintes and La Rochelle (1562).[11] The Seventeen Provinces (now the Netherlands, Belgium and parts of Northern France) were disrupted by widespread Protestant iconoclasm in the summer of 1566. This is called the "Beeldenstorm" and began with the destruction of the statuary of the Monastery of Saint Lawrence in Steenvoorde after a "Hagenpreek", or field sermon, by Sebastiaan Matte.

Hundreds of other attacks included the sacking of the Monastery of Saint Anthony after a sermon by Jacob de Buysere. The Beeldenstorm marked the start of the revolution against the Spanish forces and the Catholic Church. 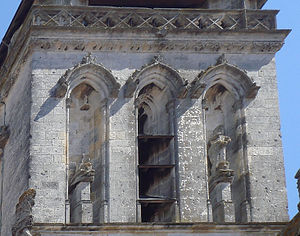 The Iconoclast belief was causing havoc throughout Europe, and in 1523, specifically due to the Swiss reformer Huldrych Zwingli, a vast number of his followers viewed themselves as being involved in a spiritual community that in matters of faith should obey neither the visible Church nor lay authorities. According to author R.W Scribner:[12]

"Zwingli's attack on images, at the first debate, triggered iconoclastic incidents in Zurich and the villages under civic jurisdiction that the reformer was unwilling to condone." And due to this action of protest against authority, "Zwingli responded with a carefully reasoned treatise that men could not live in society without laws and constraint."

Within Muslim history, the act of removing idols from the Ka'ba in Mecca is considered by all believers to be of great symbolic and historical importance.

In general, Muslim societies have avoided the depiction of living beings (animals and humans) within such sacred spaces as mosques and madrasahs. This opposition to figural representation is not based on the Qur'an, but rather on various traditions contained within the Hadith. The prohibition of figuration has not always extended to the secular sphere, and a robust tradition of figural representation exists within Muslim art.[13] However, western authors have tended to perceive "a long, culturally determined, and unchanging tradition of violent iconoclastic acts" within Islamic society.[13]

Certain Muslim denominations continue to pursue iconoclastic agendas. There has been much controversy within Islam over the recent and apparently on-going destruction of historic sites by Saudi Arabian authorities, prompted by the fear they could become the subject of "idolatry".[14][15]

During the Tuareg rebellion of 2012, the radical Islamist militia Ansar Dine destroyed various Sufi shrines from the 15th and 16th centuries in the city of Timbuktu, Mali.[16]

During the Bahraini urprising a large number of Shia mosques were destroyed by the Sunni government.

The Islamic State of Iraq and the Levant has carried out iconoclastic attacks such as the destruction of Shia mosques and shrines. Notable incidents include the Mosque of the Prophet Yunus (Jonah)[17] and the Shrine to Seth in Mosul.[18]

Other examples of religious iconoclasm 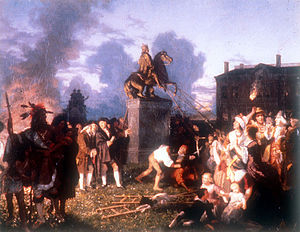 The Sons of Liberty pulling down the statue of George III of the United Kingdom on Bowling Green (New York City), 1776.

Revolutions and changes of regime, whether through uprising of the local population, foreign invasion, or a combination of both, are often accompanied by the public destruction of statues and monuments identified with the previous regime. This may also be known as damnatio memoriae, the Ancient Roman practice of official obliteration of the memory of a specific individual. Stricter definitions of "iconoclasm" exclude both types of action, reserving the term for religious or more widely cultural destruction. In many cases, such as Revolutionary Russia or Ancient Egypt, this distinction can be hard to make.

Iconoclasm in the French Revolution

Throughout the radical phase of the French Revolution, iconoclasm was supported by members of the government as well as the citizenry. Numerous monuments, religious works, and other historically significant pieces were destroyed in an attempt to eradicate any memory of the Old Regime. At the same time, the republican government felt responsible to preserve these works for their historical, aesthetic, and cultural value. One way the republican government succeeded in their paradoxical mission of preserving and destroying symbols of the Old Regime was through the development of museums.

During the Revolution, a statue of King Louis XV in the Paris square which until then bore his name, was pulled down and destroyed. This was a prelude to the guillotining of his successor Louis XVI in the same site, renamed "Place de la Révolution" (at present Place de la Concorde).

The statue of Napoleon on the column at Place Vendôme, Paris was also the target of iconoclasm several times: destroyed after the Bourbon Restoration, restored by Louis-Philippe, destroyed during the Paris Commune and restored by Adolphe Thiers. 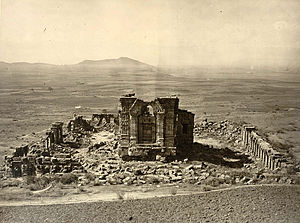 General view of Temple and Enclosure of Marttand or the Sun, near Bhawan, taken by John Burke in 1868.

Records from the campaign recorded in the Chach Nama record temple demolitions during the early 8th century when the Umayyad governor of Damascus, al-Hajjaj ibn Yusuf,[24] mobilized an expedition of 6000 cavalry under Muhammad bin Qasim in 712.

The historian, Upendra Thakur records the persecution of Hindus and Buddhists:

Muhammad triumphantly marched into the country, conquering Debal, Sehwan, Nerun, Brahmanadabad, Alor and Multan one after the other in quick succession, and in less than a year and a half, the far-flung Hindu kingdom was crushed ... There was a fearful outbreak of religious bigotry in several places and temples were wantonly desecrated. At Debal, the Nairun and Aror temples were demolished and converted into mosques.[25]

Sultan Sikandar Butshikan of Kashmir (1389–1413) ordered the breaking of all "golden and silver images". The Firishta states, "After the emigration of the Bramins, Sikundur ordered all the temples in Kashmeer to be thrown down. Having broken all the images in Kashmeer, (Sikandar) acquired the title of 'Destroyer of Idols'".[26] 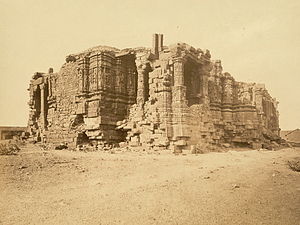 In 725 Junayad, the governor of Sind, sent his armies to destroy the second Somnath.[27] In 1024, the temple was again destroyed by Mahmud of Ghazni,[28] who raided the temple from across the Thar Desert. The temple was rebuilt by Bhoja of the Paramara dynasty of Malwa and Bhima of the Solanki dynasty of Patan between 1026-42. The wooden structure was replaced by Kumarpal (r. 1143–72), who rebuilt the temple out of stone.[29]

There had been a number of anti-Buddhist campaigns in Chinese history, and temples and Buddhist images were destroyed. One of the most notable of these campaigns is the Great Anti-Buddhist Persecution of the Tang dynasty.

During the 1926 Northern Expedition in Guangxi, Kuomintang General Bai Chongxi led his troops in destroying Buddhist temples and smashing Buddhist images, turning the temples into schools and Kuomintang party headquarters.[30] It was reported that almost all of the viharas in Guangxi were destroyed. The monks were removed.[31] Bai led a wave of anti-foreignism in Guangxi, attacking American, European, and other foreigners and missionaries, and generally making the province unsafe for foreigners. Westerners fled from the province and some Chinese Christians were also attacked as imperialist agents.[32]

Other examples of political destruction of images include: