From Infogalactic: the planetary knowledge core
Jump to: navigation, search
This article is about the type of graphic symbol. For chromosome ideograms, see Cytogenetics. For the rhetorical device, see Ideograph (rhetoric). 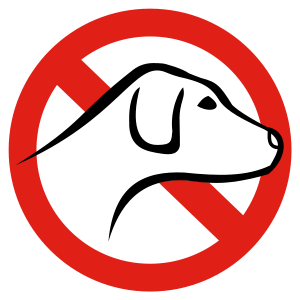 "No dogs allowed" sign in Spain. The dog illustration is a pictogram. The red circle and bar is an ideogram representing the idea of "no" or "not allowed". 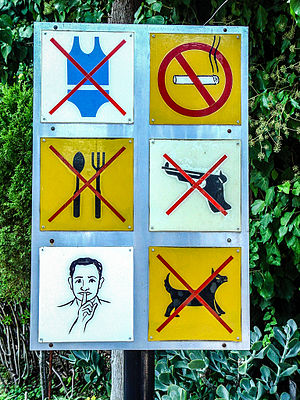 Ideogram in the Church of the Visitation, Jerusalem

An ideogram or ideograph (from Greek ἰδέα idéa "idea" and γράφω gráphō "to write") is a graphic symbol that represents an idea or concept, independent of any particular language, and specific words or phrases. Some ideograms are comprehensible only by familiarity with prior convention; others convey their meaning through pictorial resemblance to a physical object, and thus may also be referred to as pictograms.

In proto-writing, used for inventories and the like, physical objects are represented by stylized or conventionalized pictures, or pictograms. For example, the pictorial Dongba symbols without Geba annotation cannot represent the Naxi language, but are used as a mnemonic for reciting oral literature.[1] Some systems also use ideograms, symbols denoting abstract concepts.

The term "ideogram" is often used to describe symbols of writing systems such as Egyptian hieroglyphs, Sumerian cuneiform and Chinese characters. However, these symbols are logograms, representing words or morphemes of a particular language rather than objects or concepts. In these writing systems, a variety of strategies were employed in the design of logographic symbols. Pictographic symbols depict the object referred to by the word, such as an icon of a bull denoting the Semitic word ʾālep "ox". Some words denoting abstract concepts may be reprented iconically, but most other words are represented using the rebus principle, borrowing a symbol for a similarly-sounding word. Later systems used selected symbols to represent the sounds of the language, for example the adaptation of the logogram for ʾālep "ox" as the letter aleph representing the initial sound of the word, a glottal stop.

Although Chinese characters are logograms, two of the smaller classes in the traditional classification are ideographic in origin: