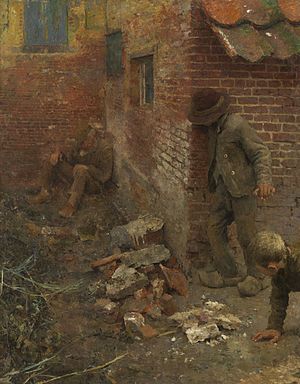 The Idiot by Evert Larock

An idiot, dolt, dullard or (archaically) mome is an intellectually disabled person, or someone who acts in a self-defeating or significantly counterproductive way. The similar terms moron, imbecile, and cretin have all gained specialized meanings in modern times. An idiot is said to be idiotic, and to suffer from idiocy. A dunce is an idiot who is specifically incapable of learning. An idiot differs from a fool (who is unwise) and an ignoramus (who is uneducated/an ignorant), neither of which refers to someone with low intelligence. In modern English usage, the terms "idiot" and "idiocy" describe an extreme folly or stupidity, and its symptoms (foolish or stupid utterance or deed). In psychology, it is a historical term for the state or condition now called profound intellectual disability.

Idiot is a word derived from the Greek ἰδιώτης, idiōtēs ("person lacking professional skill", "a private citizen", "individual"), from ἴδιος, idios ("private", "one's own").[1] In Latin the word idiota ("ordinary person, layman") preceded the Late Latin meaning "uneducated or ignorant person".[2] Its modern meaning and form dates back to Middle English around the year 1300, from the Old French idiote ("uneducated or ignorant person"). The related word idiocy dates to 1487 and may have been analogously modeled on the words prophet[3] and prophecy.[4][5] The word has cognates in many other languages.

An idiot in Athenian democracy was someone who was characterized by self-centeredness and concerned almost exclusively with private—as opposed to public—affairs.[6] Idiocy was the natural state of ignorance into which all persons were born and its opposite, citizenship, was effected through formalized education.[6] In Athenian democracy, idiots were born and citizens were made through education (although citizenship was also largely hereditary). "Idiot" originally referred to "layman, person lacking professional skill", "person so mentally deficient as to be incapable of ordinary reasoning". Declining to take part in public life, such as democratic government of the polis (city state), was considered dishonorable. "Idiots" were seen as having bad judgment in public and political matters. Over time, the term "idiot" shifted away from its original connotation of selfishness and came to refer to individuals with overall bad judgment–individuals who are "stupid". According to the Bauer-Danker Lexicon, the noun ίδιωτής in ancient Greek meant "civilian" (ref Josephus Bell 2 178), "private citizen" (ref sb 3924 9 25), "private soldier as opposed to officer," (Polybius 1.69), "relatively unskilled, not clever," (Herodotus 2,81 and 7 199).[7] The military connotation in Bauer's definition stems from the fact that ancient Greek armies in the time of total war mobilized all male citizens (to the age of 50) to fight, and many of these citizens tended to fight poorly and ignorantly.

In 19th and early 20th century medicine and psychology, an "idiot" was a person with a very severe intellectual disability. In the early 1900s, Dr. Henry H. Goddard proposed a classification system for intellectual disability based on the Binet-Simon concept of mental age. Individuals with the lowest mental age level (less than three years) were identified as idiots; imbeciles had a mental age of three to seven years, and morons had a mental age of seven to ten years.[8] The term "idiot" was used to refer to people having an IQ below 30.[9][10] IQ, or intelligence quotient, was originally determined by dividing a person's mental age, as determined by standardized tests, by their actual age. The concept of mental age has fallen into disfavor, though, and IQ is now determined on the basis of statistical distributions.[11]

In current American medical classification, these people are now said to have "profound intellectual disability" but this term is not in use in the United Kingdom.

Until 2007, the California Penal Code Section 26 stated that "Idiots" were one of six types of people who are not capable of committing crimes. In 2007 the code was amended to read "persons who are mentally incapacitated."[12] In 2008, Iowa voters passed a measure replacing "idiot, or insane person" in the State's constitution with "person adjudged mentally incompetent."[13]

In several U.S. states, "idiots" do not have the right to vote:

The constitution of the state of Arkansas was amended in the general election of 2008 to, among other things, repeal a provision (Article 3, Section 5) which had until its repeal prohibited "idiots or insane persons" from voting.[18]

"Idiots" are also barred from voting in British parliamentary elections.[19]

A few authors have used "idiot" characters in novels, plays and poetry. Often these characters are used to highlight or indicate something else (allegory). Examples of such usage are William Faulkner's The Sound and the Fury and William Wordsworth's The Idiot Boy. Idiot characters in literature are often confused with or subsumed within mad or lunatic characters. The most common imbrication between these two categories of mental impairment occurs in the polemic surrounding Edmund from William Shakespeare's King Lear. In Fyodor Dostoevsky's novel The Idiot, the idiocy of the main character, Prince Lev Nikolaievich Myshkin, is attributed more to his honesty, trustfulness, kindness, and humility, than to a lack of intellectual ability. Nietzsche claimed, in his The Antichrist, that Jesus was an idiot. This resulted from his description of Jesus as having an aversion toward the material world.[20]