Ignacy Jan Paderewski, GBE (Polish: [iɡˈnat͡sɨ ˈjan padɛˈrɛfskʲi]; 18 November [O.S. 6 November] 1860 – 29 June 1941) was a Polish pianist and composer, politician, and spokesman for Polish independence.[1] He was a favorite of concert audiences around the globe. His musical fame opened access to diplomacy and the media. He was the prime minister and foreign minister of Poland in 1919, and represented Poland at the Paris Peace Conference in 1919.

Paderewski was born to Polish parents in the village of Kuryłówka (Kurilivka), Litin uyezd in the Podolia Governorate, the Russian Empire (the village today is part of the Khmilnyk raion of Vinnytsia Oblast in Ukraine). His father, Jan Paderewski, was an administrator of large estates. His mother, Poliksena (née Nowicka), died several months after Paderewski was born, and he was brought up by distant relatives. 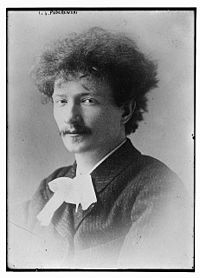 Paderewski early in his career 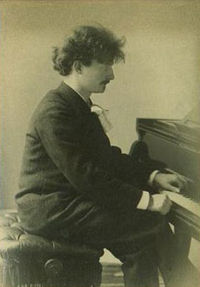 From his early childhood, Paderewski was interested in music while living at the private estate near Żytomir where he moved with his father. However, soon after his father's arrest in connection with the January Uprising (1863), he was adopted by his aunt. After being released, Paderewski's father married again and moved to the town of Sudylkov, near Shepetovka.

Initially, he took piano lessons with a private tutor. At the age of 12, in 1872, he went to Warsaw and was admitted to the Warsaw Conservatorium. After graduating in 1878, he was asked to become a tutor of piano classes at his alma mater, which he accepted. In 1880 Paderewski married Antonina Korsakówna, and soon afterwards their first child was born. The following year, they discovered that the son was handicapped; soon afterward, Antonina died. Paderewski decided to devote himself to music, and in 1881 he went to Berlin to study music composition with Friedrich Kiel[2] and Heinrich Urban. In 1884 he moved to Vienna, where he was a pupil of Theodor Leschetizky. It was in Vienna that he made his musical debut in 1887. He soon gained great popularity and his subsequent appearances (in Paris in 1889 and in London in 1890) were major successes. His brilliant playing created a furor that reached to almost extravagant lengths of admiration; and his triumphs were repeated in the United States in 1891. His name at once became synonymous with the highest level of piano virtuosity. However, not everyone was impressed. After hearing Paderewski for the first time, Moriz Rosenthal said: "Yes, he plays well, I suppose, but he's no Paderewski".[3]

He was also a substantial composer, including many pieces for piano. He became world famous for the Minuet in G, Op. 14/1, part of a set of six pieces that are otherwise forgotten. In 1901 his sole opera Manru received its world premiere at Dresden, then it had its American premiere in 1902 at the Metropolitan Opera. To this day it remains the only Polish opera by a Polish composer ever performed there. Paderewski, his second wife, entourage, parrot and Erard piano gave concerts in Australia and New Zealand in 1904, in collaboration with Polish-French composer, Henri Kowalski.[4]

In 1909 came the premiere of his Symphony in B minor "Polonia", a massive work lasting 75 minutes. It would be his last composition, apart from a hymn for male chorus written in 1917.

In 1896, Paderewski donated US$10,000 to establish a trust fund to encourage American-born composers. The fund underwrote a triennial competition that began in 1901 called the "Paderewski Prize". Paderewski also launched a similar contest in Leipzig in 1898.

He was also active in pursuing various philanthropic causes. In 1910 he funded the erection of the Battle of Grunwald Monument in Kraków, in commemoration of the 500th anniversary of the event. In 1913, Paderewski settled in the United States. 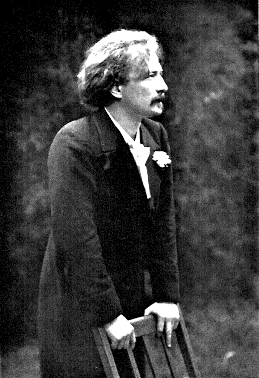 On the eve of World War I, and at the height of his fame, Paderewski bought a 2,000-acre (810 ha) property, Rancho San Ignacio, near Paso Robles, in San Luis Obispo County, in the Central Coast area of California. A decade later he planted Zinfandel vines on the California property. When the vines matured, the wine was made for him at the nearby York Mountain Winery, then, as now, one of the best-known wineries between Los Angeles and San Francisco.[5]

He was extremely popular internationally, to such an extent that the music hall duo "The Two Bobs" had a hit song in 1916, in music halls across Britain, with the song "When Paderewski plays". He was a favorite of concert audiences around the globe; women especially admired his performances.[6]

During World War I, Paderewski became an active member of the Polish National Committee in Paris, which was soon accepted by the Entente as the representative of the forces trying to create the state of Poland. He became a spokesman of that organization, and soon also formed other social and political organizations, among them the Polish Relief Fund in London. It was then that he met the English composer Edward Elgar, who used a theme from Paderewski's Fantasie Polonaise[7] in his work Polonia written for the Polish Relief Fund concert in London on 6 July 1916 (the title no doubt recognizing Paderewski's Symphony in B minor).

In April 1918, he met in New York City with leaders of the American Jewish Committee in an unsuccessful attempt to broker a deal whereby organized Jewish groups would support Polish territorial ambitions in exchange for support for equal rights. However, it soon became clear that no plan would satisfy both Jewish leaders and Roman Dmowski, head of the Polish National Committee, who was strongly anti-semitic.[8]

He played an important role in meeting with President Woodrow Wilson and others in obtaining the explicit inclusion of independent Poland as point 13 in Wilson's peace terms, the Fourteen Points.[9]

At the end of the war, with the fate of the city of Poznań and the whole region of Greater Poland (Wielkopolska) still undecided, Paderewski visited Poznań. With his public speech on 27 December 1918, the Polish inhabitants of Poznań began a military uprising against Germany, called the Greater Poland Uprising. He worked hard to get Dmowski and Józef Piłsudski to collaborate, but Piłsudski won out. 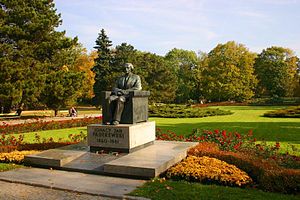 In 1919, in the newly independent Poland, Piłsudski who was the Chief of State appointed Paderewski as the Prime Minister and Minister of Foreign Affairs (January 1919 – December 1919). He and Dmowski represented Poland at the Paris Peace Conference. Paderewski at the time tried to somehow whitewash to the press the role of the re-created Polish Army in the Jewish pogroms happening at the time in the Polish–Soviet War.[10] He signed the Treaty of Versailles, which restored the territories of Greater Poland and Pomerania around the City of Gdańsk to Poland. Although this fell short of what the Polish delegates had demanded, these territories provided the core of the restored Polish state.

After being abandoned by many of his political supporters, Paderewski resigned as foreign minister on 4 December 1919, and took on the role of Polish Ambassador to the League of Nations.

In 1922 he retired from politics and returned to his musical life. His first concert after a long break, held at Carnegie Hall, was a significant success. He also filled Madison Square Garden (20,000 seats) and toured the United States in a private railway car.[11]

Soon he moved to Morges in Switzerland. After Piłsudski's coup d'état in 1926, Paderewski became an active member of the opposition to Sanacja rule. In 1936 a coalition of members of the opposition was signed in his mansion; it was nicknamed the Front Morges after the name of the village. 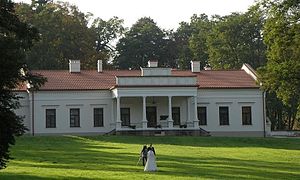 By 1936, two years after the death of his wife, Paderewski consented to appear in a film presenting his talent and art on the screen. This proposal had come at a time when Paderewski did not wish to appear in public. However, the film project did proceed, and the selected film script was an opportunity to feature Paderewski. The film was directed by the exiled German-born director, Lothar Mendes, released in Britain as Moonlight Sonata in 1937, retitled The Charmer for United States distribution in 1943; it's notable primarily for its rare footage of his performance on the piano.

In November 1937 Paderewski agreed to take on one last pupil for piano. This musician was Witold Małcużyński, who had won second place at the International Chopin Piano Competition.

After the Polish Defensive War of 1939 Paderewski returned to public life. In 1940 he became the head of the National Council of Poland, a Polish parliament in exile in London. The eighty-year-old artist also restarted his Polish Relief Fund and gave several concerts (most notably in the United States) to gather money for it. However, his mind was not what it had once been: scheduled again to play Madison Square Garden, he refused to appear, insisting that he had already played the concert, presumably remembering the concert he had played in the 1920s.[11] 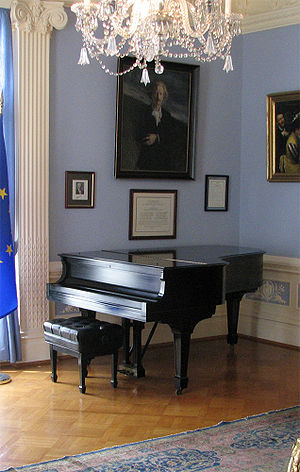 During one such tour in 1941, Paderewski was taken ill on 27 June. Nothing was discussed with his personal secretary or entourage, but at the initiative of Sylwin Strakacz, physicians were called in for consultation and diagnosed pneumonia. Despite improving health and signs of recovery, Paderewski died in New York at 11:00 p.m., aged 80. He was buried in Arlington National Cemetery, in Arlington, Virginia, near Washington, D.C. In 1992, his body was brought to Warsaw and placed in St. John's Archcathedral. His heart is encased in a bronze sculpture in the National Shrine of Our Lady of Czestochowa near Doylestown, Pennsylvania.[13]

Early in 1941, the music publisher Boosey & Hawkes had commissioned 17 prominent American or North America-resident composers to contribute a solo piano piece each for an album to commemorate the 50th anniversary of Paderewski's American debut in 1891. However, his death in June caused the album to become a posthumous tribute to his entire life and work. Homage to Paderewski was published in 1942.

The Polish Museum of America[14] in Chicago received a donation of the personal possessions of Ignacy Jan Paderewski following his death in June 1941. Both Ignacy Paderewski and his sister, Antonina Paderewska Wilkonska were enthusiastic supporters and generous sponsors of the Museum. Antonina, executor of Ignacy’s will, decided to donate these personal possessions to the Museum, as well as artifacts from his apartment in New York. This space was officially opened on 3 November 1941. 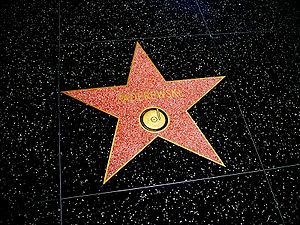 Paderewski's star on the Hollywood Walk of Fame

In 1948 the Ignacy Paderewski Foundations was established in New York City, on the initiative of the Polish community in New York with the goal of promoting Polish culture in the United States.[15] Two other Polish-American organizations are also named in his honor and dedicated to promoting the legacy of the maestro: the Paderewski Association in Chicago as well as the Paderewski Music Society in Southern California.

Due to the unusual combination of the notable achievements of being a world-class pianist and a successful politician, Saul Kripke used Paderewski in a famous philosophical example in his article "A Puzzle about Belief".[16] Paderewski was so famous that in the 1953 motion picture The 5,000 Fingers of Dr. T (written by Theodor Seuss Geisel, better known as Dr. Seuss), piano teacher Dr. Terwilliker tells his pupils that he will "make a Paderewski" out of them. 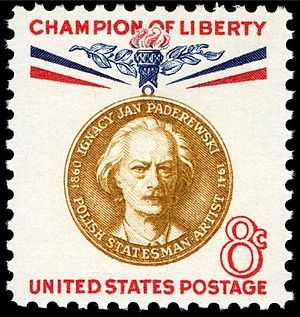 There are streets and schools named after Paderewski in many major cities in Poland. There are also streets named after him in Perth Amboy, New Jersey, and Buffalo, New York. In addition, the Academy of Music in Poznań is named after him. Paderewski has a star on the Hollywood Walk of Fame in Los Angeles, awarded in 1960.[17]