Igor Vasilyevich Kurchatov (Russian: И́горь Васи́льевич Курча́тов; 12 January 1903 – 7 February 1960), was a Soviet nuclear physicist who is widely known as the director of the Soviet atomic bomb project. Along with Georgy Flyorov and Andrei Sakharov, Kurchatov is widely remembered and dubbed as the "father of the Soviet atomic bomb" for his directorial role in the development of the Soviet nuclear program, in a clandestine program during World War II formed in the wake of the USSR's discovery of the Western Allied efforts to develop nuclear weapons. After nine years of covert development, the Soviet Union successfully tested its first nuclear weapon, codenamed First Lightning at the Semipalatinsk Test Range in 1949. In 1954 he was awarded the USSR State Prize in physics.

From 1940 onward, Kurchatov worked and contributed advancing the nuclear weapons program, and later advocated for the peaceful development of nuclear technology. In 1950, Kurchatov contributed in the development of the Hydrogen bomb with Andrei Sakharov who originated this development as Sakharov's Third Idea. Other projects completed under Kurchatov included the installation and development of Soviet Union's first particle accelerator, the Cyclotron, inauguration and established of Obninsk Nuclear Power Plant, the first commercial nuclear power plant in Obninsk, and the completion and launching of the Lenin, the first nuclear-power vessel, under his leadership, in 1959.

Kurchatov was born in Simsky Zavod, Ufa Governorate (now the town of Sim, Chelyabinsk Oblast) in the family of a chartered surveyor. He was of Russian ethnicity.[1] After completing Simferopol gymnasium №1, he enrolled at the Physics Physics Department of the Crimea State University, earning his doctorate degree in Physics from there, under the supervision of Abram Fedorovich Ioffe. Kurchatov also studied at the Polytechnical Institute in Petrograd where he earned his degrees in naval engineering.

After studying Physics and Naval engineering, Kurchatov was a research assistant at the faculty of Physics of the Ioffe Physico-Technical Institute in Baku[citation needed] and later he researched under Dr. Abram Fedorovich Ioffe at the Physico-Technical Institute on various problems connected with radioactivity. In 1932, he received funding for his own nuclear science research team, which built the Soviet Union's first cyclotron particle accelerator in 1939.

Between 1931 and 1934 he worked in the Physical department of the Radium Institute (Leningrad) which was headed by Vitaly Khlopin (ru) where Kurchatov was researching as a senior scientist and took part in the creation of the Europe's first cyclotron (work was started in 1932, the cyclotron was completed in 1937). Then to 1943 he worked at the Ioffe Institute with Anatoly Petrovich Alexandrov. In that period (by November 1941) they devised a method of demagnetizing ships to protect them from German mines, which was in active use through the end of the World War II and afterwards.[2][3][4] Kurchatov's laboratory separated from the Ioffe Institute and moved to Moscow in 1943 for the work on the Soviet atomic bomb project.

In 1932, George Gamow and Lev Mysovskii submitted a draft for consideration by the Academic Council of Radium Institute, which was approved by the Soviet government. Khlopin, under the guidance and direct participation of Igor Kurchatov, Lev Mysovskii and George Gamow, installed the Europe's first cyclotron particle accelerator . Installation was finished in 1937, and the research began to take place on 21 September 1939.[5][6]

Kurchatov and his apprentice Georgy Flyorov discovered the basic ideas of the uranium chain reaction and the nuclear reactor concept in the 1939. In 1942 Kurchatov declared: "At breaking up of kernels in a kilogram of uranium, the energy released must be equal to the explosion of 20,000 tons of trotyl." This announcement was practically verified during the atomic bombing of Hiroshima.

In 1941, Germany commenced a large-scale military offensive against the Soviet Union under codename Operation Barbarossa. During this time, Kurchatov was leading the research in nuclear physics and was widely known in the Soviet Academy of Sciences for his wide research. Because of the war with Germany and her allies, the Soviet Union did not undertake any serious initiative to start scientific research into nuclear weapons until 1942. In April 1942, Georgii Flerov, who would later become a key figure in the nuclear program, addressed a secret letter to Joseph Stalin pointing out that nothing was being published in the physics journals by Americans, British, or even Germans, on nuclear fission since the year of its discovery in 1939, and that indeed many of the most prominent physicists in Allied countries seemed not to be publishing at all. This academic silence was highly suspicious and Flerov urged Stalin to launch the program with immediate effect as he believed that other nations were already secretly advancing their programmes. In 1943, the NKVD obtained a copy of a secret British report by the MAUD Committee concerning the feasibility of atomic weapons, which led Joseph Stalin to order the commencement of a Soviet nuclear programme (albeit with very limited resources).

Stalin turned to the Soviet Academy of Sciences to find the best administrator to lead the program, and as a result, the Soviet Academy of Sciences chose Kurchatov for his wide experience in nuclear physics. Ioffe recommended Kurchatov to Vyacheslav Molotov who advised Stalin to appoint Kurchatov as the formal director of the nascent Soviet nuclear programme and the development of Soviet nuclear weapons began in the 1940s. Kurchatov switched his research first to protecting shipping from magnetic mines, and later to tank armour, and finally to nuclear physics.

During its formative years, the atomic bomb project remained a relatively low priority until information from spy Klaus Fuchs and later the destruction of Hiroshima and Nagasaki goaded Stalin into action. Stalin ordered Kurchatov to produce a bomb by 1948, and put the ruthless Lavrenty Beria in direct command of the project. The project took over the town of Sarov in the Gorki Oblast (now Nizhny Novgorod Oblast) on the Volga, and renamed it Arzamas-16. The team (which included other prominent Soviet nuclear scientists such as Julii Borisovich Khariton and Yakov Borisovich Zel'dovich) was assisted both by public disclosures made by the United States government and by further information supplied by Fuchs, but Kurchatov and Beria (fearing the intelligence was misinformation) insisted his scientists retest everything themselves. Beria in particular would use the intelligence as a third-party check on the conclusions of the teams of scientists.

On August 29, 1949, Kurchatov's team successfully detonated its initial test device First Lightning (a plutonium implosion bomb) at the Semipalatinsk Test Site; Kurchatov later remarked that his main feeling at the time was one of relief.

In the wake of the successful detonation of the U.S's first fusion device, codenamed Ivy Mike in 1952, Stalin ordered Soviet scientists to build a comparable device, a program that was launched in 1953. The directors of this project were Vitaly Ginzburg and Andrei Sakharov who originated this project as Sakharov's Third Idea. Kurchatov subsequently contributed some of the calculations necessary for the Soviet Union's first hydrogen bomb. Unlike Ginzburg, Sakharov, and Yakov Zel'dovich, Kurchatov was only involved in small scale calculations, applying the basic nuclear weapons principles used in the smaller nuclear weapons that were developed under his directorship. In 1953, the Soviet Union detonated its first thermonuclear device, codename Joe 4. While other scientists, such as Ginzburg, Zel'dovich and Sakharov earned renown, Kurchatov's contribution was diminished.

In January 1949 Kurchatov had been involved in a serious accident which became a catastrophe at Chelyabinsk-40 in which it is possible that even more people died than at Chernobyl.[7] In an effort to save the uranium load and reduce losses in the production of plutonium, Kurchatov was the first to step into the central hall of the damaged reactor full of radioactive gasses.[8]

"Undoubtedly it was exposure to radiation on at least several occasions that drastically shortened his life."[9] Kurchatov's health sharply declined in his last years. He suffered a stroke in 1954 and died in Moscow of a cardiac embolism on 7 February 1960 aged 57. He was cremated and his ashes were buried in the Kremlin Wall Necropolis on Red Square. 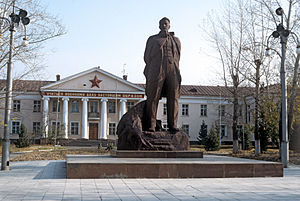 During the A-bomb programme, Kurchatov swore he would not cut his beard until the program succeeded, and he continued to wear a large beard (often cut into eccentric styles) for the remainder of his life, earning him the nickname "The Beard". Two towns bear his name: Kurchatov Township, the headquarters of the STS, and Kurchatov near Kursk (the site of a nuclear power station), the Kurchatov Institute is named in his honour, and bears a large monument dedicated to him at the entrance. The crater Kurchatov on the Moon and the asteroid 2352 Kurchatov are also named after him. Many of his students also enjoyed distinguished careers, among them Andrei Sakharov, Victor Adamski, Yuri Babaev, Yuri Trutnev and Yuri Smirnov.

For his part in establishing the Soviet nuclear program, in accordance with state decree 627-258, Kurchatov was awarded the title of Hero of Socialist Labor, the Stalin Prize First Class, the sum of 500,000 rubles (besides the earlier results of (50%) premium in the amount of 500,000 rubles and a ZIS-110 car, a private house and cottage furnished by the state, a doubling of his salary and "the right (for life for him and his wife) to free travel by rail, water and air transport in the USSR". In all, he was:

He was also awarded the Gold Medal. Euler Academy of Sciences of the USSR and the Silver Medal of the World the Joliot-Curie.

In the Transfermium Wars element naming controversy, the USSR's proposed name for element 104 was "kurchatovium", Ku, in honor of Kurchatov. Element 104 is now known as rutherfordium.