Illegal logging is the harvest, transportation, purchase or sale of timber in violation of laws. The harvesting procedure itself may be illegal, including using corrupt means to gain access to forests; extraction without permission or from a protected area; the cutting of protected species; or the extraction of timber in excess of agreed limits (see Box 1).

Illegalities may also occur during transport, such as illegal processing and export; fraudulent declaration to customs; the avoidance of taxes and other charges, and fraudulent certification.[1]

Illegal logging is a pervasive problem, causing enormous damage to forests, local communities and to the economies of producer countries. Despite the economic importance of trade in timber and forest products, major international timber consumer countries, such as the EU, have no legal means to halt the import of illegally sourced forest products,[4] because the identification of illegally logged or traded timber is technically difficult. Therefore, a legal basis for normative acts against timber imports or other products manufactured out of illegal wood is missing. Scientific methods to pinpoint the geographic origin of timber are currently under development.[5] Possible actions to restrict imports cannot meet with WTO regulations of non-discrimination. They must instead be arranged in bilateral agreements. TRAFFIC,[6] the wildlife trade monitoring network strives to monitor the illegal trade of timber and provide expertise in policy and legal reviews.[7]

It is estimated that illegal logging in public lands alone causes losses in assets and revenue in excess of 10 billion USD annually.[8] Although exact figures are difficult to state, given the illegal nature of the activity, decant estimates show that most of the logging, more than half, that is done in the world is illegal most especially in open and vulnerable areas – the Amazon Basin,[9] Central Africa, Southeast Asia, the Russian Federation – is illegal.[10]

Available figures and estimations must be dealt with cautiously. Governments may tend to underestimate the situation. High estimates of illegal logging may constitute an embarrassment as these hint at ineffective enforcement of legislation or, even worse, bribery and corruption. On the other hand, environmental NGOs publish alarming figures to raise awareness and to emphasise the need for stricter conservation measures. For companies of the forest sector, publications providing high estimations can be regarded as potentially threatening for their reputation and their market perspective, including the competitiveness of wood in comparison to other materials. However, for many countries, NGOs are the only source of information apart from state institutions that probably clearly underestimate the situation. For example, the Republic of Estonia calculated an amount of 1% illegally harvested timber in 2003, whereas it is estimated to reach a maximum of 50% by the ENGO "Estonian Green Movement".[11] In Latvia, the situation is comparable; anecdotal evidence points towards 25%[12] of logging being illegal. 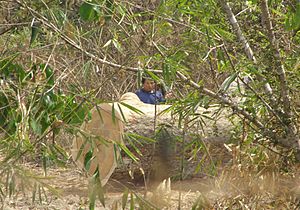 Illegal logging continues in Thailand. This photograph was taken from the roadside in Mae Wang District, Chiang Mai Province, in March 2011

Illegal logging contributes to deforestation and by extension global warming, causes loss of biodiversity and undermines the rule of law. These illegal activities undermine responsible forest management, encourage corruption and tax evasion and reduce the income of the producer countries, further limiting the resources producer countries can invest in sustainable development. Illegal logging has serious economic and social implications for the poor and disadvantaged with millions of dollars worth of timber revenue being lost each year.[13]

Furthermore, the illegal trade of forest resources undermines international security, and is frequently associated with corruption, money laundering, organized crime, human rights abuses and, in some cases, violent conflict. In the forestry sector, cheap imports of illegal timber and forest products, together with the non-compliance of some economic players with basic social and environmental standards, destabilise international markets. This unfair competition affects those European companies, especially the small and medium-sized companies that are behaving responsibly and ready to play by fair rules. 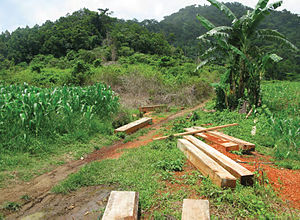 Signs of illegal timber poaching on the boundary of the protected area around the Cagua Volcano.

The East Asia Forest Law Enforcement and Governance (FLEG) Ministerial Conference took place in Bali in September 2001. The Conference brought together nearly 150 participants from 20 countries, representing government, international organizations, NGOs, and the private sector. The event was co-hosted by the World Bank and the Government of Indonesia.

The Conference's primary aims were to share analysis on forest law enforcement; explore priority issues of forest law enforcement, including illegal logging in the East Asia region, among senior officials from forest and related ministries, NGOs and industry representatives; and commit to action at the national and regional level.

In May 2003 the European Commission presented the EU Forest Law Enforcement, Governance and Trade (FLEGT) Action Plan. This marked the beginning of a long process by which the EU aims to develop and implement measures to address illegal logging and related trade. The primary means of implementing the Plan is through Voluntary Partnership Agreements with timber producing countries. The EU Timber Regulation (EUTR), which went into effect 3 March 2013, was adopted in 2010.[28]

A Greenpeace investigation published in May 2014 demonstrates that EU Timber Regulation is ineffective if fraudulent paperwork is accepted at face value and there is not sufficient enforcement by EU authorities.[9]

The Africa Forest Law Enforcement and Governance (AFLEG) Ministerial Conference was held in Yaoundé, Cameroon in October 2003. The meeting drew together ministers and stakeholders from Africa, Europe and North America to consider how partnerships between producers, consumers, donors, civil society and the private sector could address illegal forest exploitation and associated trade in Africa.

The AFLEG conference, the second regional forest law enforcement and governance meeting after East Asia, resulted in endorsement of a ministerial declaration and action plan as well as a variety of informal implementation initiatives.

In 2014, the EU-FAO Forest Law Enforcement, Governance and Trade Programme[29] of the Food and Agriculture Organization of the United Nations published the study The Voluntary Partnership Agreement (VPA) process in Central and West Africa: from theory to practice[30] to document and foster strategic reflection in partner countries already engaged in negotiating a VPA - or those who will be entering into such negotiations - by providing examples of good practices. These good practices were identified and recorded following interviews with the main stakeholders in the eight VPA countries in West and Central Africa, the European Forest Institute’s (EFI) EU FLEGT Facility[31] and the European Commission.

The Europe and North Asia Forest Law Enforcement and Governance (ENA FLEG) Ministerial Conference was held in Saint Petersburg, Russia on 22–25 November 2005. In May 2004, the Russian Federation announced its intention to host the ENA FLEG process, supported by the World Bank. A preparatory conference was held in Moscow in June 2005.

The Saint Petersburg conference brought together nearly 300 participants representing 43 governments, the private sector, civil society and international organisations. It agreed to the Saint Petersburg Declaration on Forest Law Enforcement and Governance in Europe and North Asia. The Declaration includes an indicative list of actions, intended to serve as a general framework for possible actions to be undertaken by governments as well as civil society.

The conference took place as the United Kingdom prepared to pass the G8 Presidency to Russia. As Valery Roshchupkin, Head of the Federal Forestry Agency of the Russian Federation, confirmed, illegal logging would be of special importance for Russia as the G8 President and for the following G8 Summit, also held in Saint Petersburg.

In response to growing concerns over illegal logging and advice from TRAFFIC[6] and other organisations,[7] on May 22, 2008 the U.S. amended the Lacey Act, when the Food, Conservation, and Energy Act of 2008 expanded its protection to a broader range of plants and plant products (Section 8204. Prevention of Illegal Logging Practices).[32]

The requirements under the new Amendments are two-fold. First, the Lacey Act now makes it illegal to import into the United States plants that have been harvested contrary to any applicable Federal Law, State Law, Indian Tribal Law, or Foreign Law. If a plant is found to have been harvested in violation of the laws of the country where it was harvested, that plant would be subject to seizure and forfeiture if imported into the U.S. The Lacey Act also makes it unlawful, beginning December 15, 2008, to import certain plants and plant products without a Plant and Plant Product import declaration.[33]

This Plant and Plant Product Declaration must contain (among other things) the Genus, Species, and Country of Harvest of every plant found in commercial shipments of certain products, a list of applicable products (along with other requirements and guidance) can be found on the USDA APHIS website.[33]

The Timber Development Association (TDA) welcomes on June 6, 2014's release by the Australian Department of Agriculture of a position paper on the Illegal Logging Prohibition Regulation and guidance on how timber and wood products industry can comply on the Australian Government - Department of Agriculture[34] official website. The release of the Government's guidance coincides with the release of industry developed timber due diligence tools and information through the industry website of Timber Due Diligence.[35]

The Australian Illegal Logging Prohibition Regulation applies to importers into Australia of "regulated timber products" such as sawn timber, wood panels, pulp, paper products, and wood furniture. The Regulation starts on 30 November 2014 and requires that before import of these products or processing of raw logs, due diligence is undertaken to minimise the risk that the timber products or raw logs were illegally logged or incorporate illegally logged timber.[36]