From Infogalactic: the planetary knowledge core
Jump to: navigation, search
Not to be confused with the concept of "popular illegalisms" created by Michel Foucault in Discipline and Punish.

Illegalism is an anarchist philosophy that developed primarily in France, Italy, Belgium, and Switzerland during the early 1900s as an outgrowth of individualist anarchism.[1][2] The illegalists openly embraced criminality as a lifestyle.

Illegalism first rose to prominence among a generation of Europeans inspired by the unrest of the 1890s, during which Ravachol, Émile Henry, Auguste Vaillant, and Caserio committed daring crimes in the name of anarchism, in what is known as propaganda of the deed.

Influenced by theorist Max Stirner's egoism,[3] the illegalists in France broke from anarchists like Clément Duval and Marius Jacob who justified theft with a theory of la reprise individuelle (Eng: individual reclamation). Instead, the illegalists argued that their actions required no moral basis - illegal acts were taken not in the name of a higher ideal, but in pursuit of one's own desires. "In Paris, this milieu was centred on the weekly paper, L’Anarchie and the Causeries Populaires (regular discussion groups meeting in several different locations in and around the capital each week), both of which were founded by Albert Libertad and his associates".[4] 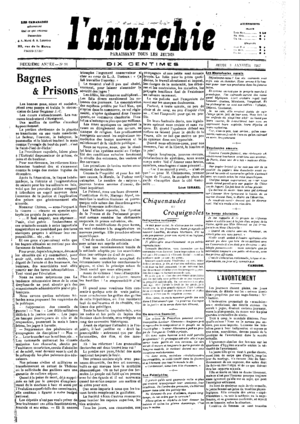 After Peter Kropotkin along with others decided to enter labor unions after their initial reservations,[5] there remained "the anti-syndicalist anarchist-communists, who in France were grouped around Sebastien Faure’s Le Libertaire. From 1905 onwards, the Russian counterparts of these anti-syndicalist anarchist-communists become partisans of economic terrorism and illegal ‘expropriations’."[5] Illegalism as a practice emerged and within it "The acts of the anarchist bombers and assassins ("propaganda by the deed") and the anarchist burglars ("individual reappropriation") expressed their desperation and their personal, violent rejection of an intolerable society. Moreover, they were clearly meant to be exemplary, invitations to revolt.".[6] But in another less dramatic sense "At that time this term was used to indicate all those practices prohibited by law that were useful for resolving the economic problems of comrades: robbery, theft, smuggling, counterfeiting money and so on."[7]

Such acts of rebellion which could be individual[6] were in the long run seen as acts of rebellion which could ignite a mass insurrection leading to revolution. Proponents and activists of this tactic among others included Johann Most, Luigi Galleani, Victor Serge, and Severino Di Giovanni. "In Argentina, these tendencies flourished at the end of the 20s and during the 30s, years of acute repression and of flinching of the once powerful workers movement –this was a desperation, though heroic, of a decadent movement."[8] 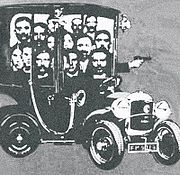 Caricature of the Bonnot gang

France's Bonnot Gang was the most famous group to embrace illegalism. The Bonnot Gang (La Bande à Bonnot) was a French criminal anarchist group that operated in France and Belgium during the Belle Époque, from 1911 to 1912. Composed of individuals who identified with the emerging illegalist milieu, the gang utilized cutting-edge technology (including automobiles and repeating rifles) not yet available to the French police.

Originally referred to by the press as simply "The Auto Bandits", the gang was dubbed "The Bonnot Gang" after Jules Bonnot gave an interview at the office of Petit Parisien, a popular daily paper. Bonnot's perceived prominence within the group was later reinforced by his high-profile death during a shootout with French police in Nogent-sur-Marne.

Advocacy of illegalism proved to be highly controversial and was contested within the anarchist milieu, particularly by those who favored anarcho-syndicalism over individual actions disconnected from the labor movement. Many socialists argued that illegalism replicated the mentality of capitalism and represented a turn towards nihilism.

Following his arrest for harbouring members of the Bonnot Gang, Victor Serge, once a forceful defender of illegalism became a sharp critic. In Memoirs of a Revolutionary, he describes illegalism as "a collective suicide".[9] Similarly, Marius Jacob reflected in 1948, "I don't think that illegalism can free the individual in present-day society... Basically, illegalism, considered as an act of revolt, is more a matter of temperament than of doctrine."[10]

Illegalism has been updated by currents such as insurrectionary anarchism and post-left anarchy. In Spain and Latin America in recent years a campaign called Yomango has appeared, which advocates shoplifting and so it updates individual reclamation.

Horst Fantazzini (March 4, 1939 Altenkessel, Saarland, Germany–December 24, 2001, Bologna, Italy),[11] was an Italian-German individualist anarchist[12] who pursued an illegalist lifestyle and practice until his death in 2001. He gained media notoriety mainly due to his many bank robberies through Italy and other countries.[11] In 1999 the film Ormai è fatta! appeared based on his life.[13]