From Infogalactic: the planetary knowledge core
Jump to: navigation, search
Not to be confused with allusion. For other uses, see Illusion (disambiguation). 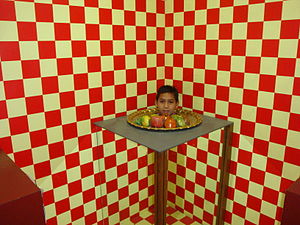 "Head on a Platter" exhibit at the Regional Science Centre, Bhopal

An illusion is a distortion of the senses, revealing how the brain normally organizes and interprets sensory stimulation. Though illusions distort reality, they are generally shared by most people.[1] Illusions may occur with any of the human senses, but visual illusions (optical illusions), are the most well-known and understood. The emphasis on visual illusions occurs because vision often dominates the other senses. For example, individuals watching a ventriloquist will perceive the voice is coming from the dummy since they are able to see the dummy mouth the words.[2] Some illusions are based on general assumptions the brain makes during perception. These assumptions are made using organizational principles (e.g., Gestalt theory), an individual's capacity for depth perception and motion perception, and perceptual constancy. Other illusions occur because of biological sensory structures within the human body or conditions outside of the body within one’s physical environment.

The term illusion refers to a specific form of sensory distortion. Unlike a hallucination, which is a distortion in the absence of a stimulus, an illusion describes a misinterpretation of a true sensation. For example, hearing voices regardless of the environment would be a hallucination, whereas hearing voices in the sound of running water (or other auditory source) would be an illusion.

Mimes are known for a repertoire of illusions that are created by physical means. The mime artist creates an illusion of acting upon or being acted upon by an unseen object. These illusions exploit the audience's assumptions about the physical world. Well-known examples include "walls", "climbing stairs", "leaning", "descending ladders", and "pulling and pushing". 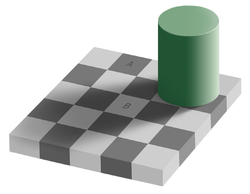 An optical illusion is characterized by visually perceived images that are deceptive or misleading. Therefore, the information gathered by the eye is processed by the brain to give, on the face of it, a percept that does not tally with a physical measurement of the stimulus source. A conventional assumption is that there are physiological illusions that occur naturally and cognitive illusions that can be demonstrated by specific visual tricks that say something more basic about how human perceptual systems work. The human brain constructs a world inside our head based on what it samples from the surrounding environment. However, sometimes it tries to organise this information it thinks best while other times it fills in the gaps.[3][4] This way in which our brain works is the basis of an illusion.

An auditory illusion is an illusion of hearing, the sound equivalent of an optical illusion: the listener hears either sounds which are not present in the stimulus, or "impossible" sounds. In short, audio illusions highlight areas where the human ear and brain, as organic, makeshift tools, differ from perfect audio receptors (for better or for worse). One example of an auditory illusion is a Shepard tone.

Examples of tactile illusions include phantom limb, the thermal grill illusion, the cutaneous rabbit illusion and a curious illusion that occurs when the crossed index and middle fingers are run along the bridge of the nose with one finger on each side, resulting in the perception of two separate noses. Interestingly, the brain areas activated during illusory tactile perception are similar to those activated during actual tactile stimulation.[5] Tactile illusions can also be elicited through haptic technology.[6] These "illusory" tactile objects can be used to create "virtual objects".[7]

Temporal illusions can occur in many ways.

Illusions can occur with the other senses including those involved in food perception. Here both sound[8] and touch[9] have been shown to modulate the perceived staleness and crispness of food products. It was also discovered that even if some portion of the taste receptor on the tongue became damaged that illusory taste could be produced by tactile stimulation.[10] Evidence of olfactory (smell) illusions occurred when positive or negative verbal labels were given prior to olfactory stimulation.[11]

Some illusions occur as result of an illness or a disorder. While these types of illusions are not shared with everyone, they are typical of each condition. For example, migraine sufferers often report fortification illusions.

In an experiment with one patient, electrical stimulation at the left temporoparietal junction lead to an illusion of another person close to her.[12][13]

Not related to senses (cognitive illusions)