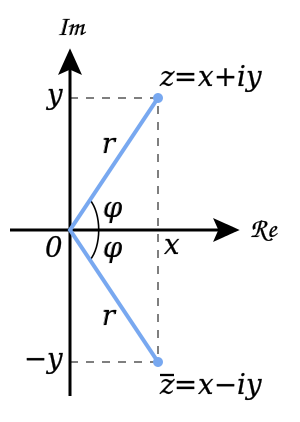 An illustration of the complex plane. The imaginary numbers are on the vertical coordinate axis.

Although Greek mathematician and engineer Heron of Alexandria is noted as the first to have conceived these numbers,[5][6] Rafael Bombelli first set down the rules for multiplication of complex numbers in 1572. The concept had appeared in print earlier, for instance in work by Gerolamo Cardano. At the time, such numbers were poorly understood and regarded by some as fictitious or useless, much as zero and the negative numbers once were. Many other mathematicians were slow to adopt the use of imaginary numbers, including René Descartes, who wrote about them in his La Géométrie, where the term imaginary was used and meant to be derogatory.[7] The use of imaginary numbers was not widely accepted until the work of Leonhard Euler (1707–1783) and Carl Friedrich Gauss (1777–1855). The geometric significance of complex numbers as points in a plane was first described by Caspar Wessel (1745–1818).[8]

In 1843 a mathematical physicist, William Rowan Hamilton, extended the idea of an axis of imaginary numbers in the plane to a three-dimensional space of quaternion imaginaries.

With the development of quotient rings of polynomial rings, the concept behind an imaginary number became more substantial, but then one also finds other imaginary numbers such as the j of tessarines which has a square of +1. This idea first surfaced with the articles by James Cockle beginning in 1848.[9] 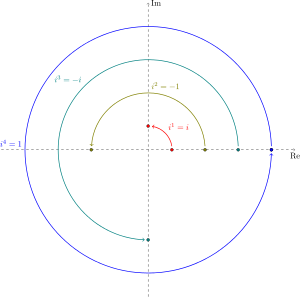 90-degree rotations in the complex plane

In this representation, multiplication by –1 corresponds to a rotation of 180 degrees about the origin. Multiplication by i corresponds to a 90-degree rotation in the "positive" direction (i.e., counterclockwise), and the equation i2 = −1 is interpreted as saying that if we apply two 90-degree rotations about the origin, the net result is a single 180-degree rotation. Note that a 90-degree rotation in the "negative" direction (i.e. clockwise) also satisfies this interpretation. This reflects the fact that −i also solves the equation x2 = −1. In general, multiplying by a complex number is the same as rotating around the origin by the complex number's argument, followed by a scaling by its magnitude.

Care must be used in multiplying square roots of negative numbers. For example,[10] the following reasoning is incorrect:

The fallacy is that the rule √x√y = √xy, where the principal value of the square root is taken in each instance, is generally valid only if x and y are suitably constrained.[note 4] It is not possible to extend the definition of principal values to the square roots of all complex numbers in a way that preserves the validity of the multiplication rule. Hence √−1 in such contexts should be regarded either as meaningless, or as a two-valued expression with the possible values i and −i.