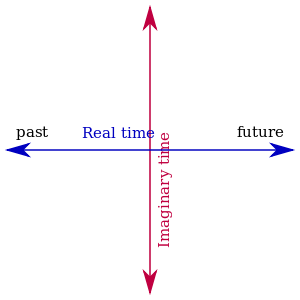 The relationship of real and imaginary time can be visualised as perpendicular axes of direction.

If we imagine "regular time" as a horizontal line running between "past" in one direction and "future" in the other, then imaginary time would run perpendicular to this line as the imaginary numbers run perpendicular to the real numbers in the complex plane. Imaginary time is not imaginary in the sense that it is unreal or made-up — it simply runs in a direction different from the type of time we experience. In essence, imaginary time is a way of looking at the time dimension as if it were a dimension of space: you can move forward and backward along imaginary time, just like you can move right and left in space.

is obtained from real time via a Wick rotation by

in the complex plane:

. It can be shown that at finite temperature T, the Green's functions are periodic in imaginary time with a period of

. Therefore their Fourier transforms contain only a discrete set of frequencies called Matsubara frequencies. Another way to see the connection between statistical mechanics and quantum field theory is to consider the transition amplitude

between an initial state I and a final state F. H is the Hamiltonian of that system. If we compare this with the partition function

, set F = I = n and sum over n. This way we don't have to do twice the work by evaluating both the statistical properties and the transition amplitudes. Finally by using a Wick rotation one can show that the Euclidean quantum field theory in (D + 1)-dimensional spacetime is nothing but quantum statistical mechanics in D-dimensional space.

Imaginary time is also used in cosmology. It is used to describe models of the universe in physical cosmology. Stephen Hawking popularized the concept of imaginary time in his book A Brief History of Time.

The concept is useful in cosmology because it can help smooth out gravitational singularities in models of the universe (see Hartle–Hawking state), where known physical laws do not apply. The Big Bang, for example, appears as a singularity in "regular time." But, when visualized with imaginary time, the singularity is removed and the Big Bang functions like any other point in spacetime.