Immigration law, regarding foreign citizens, is related to nationality law, which governs the legal status of people, in matters such as citizenship. Immigration laws vary from country to country, as well as according to the political climate of the times, as sentiments may sway from the widely inclusive to the deeply exclusive of new immigrants.

Immigration law regarding the citizens of a country is regulated by international law. The United Nations International Covenant on Civil and Political Rights[1] mandates that all countries allow entry to its own citizens.

Certain countries may maintain rather strict laws which regulate both the right of entry and internal rights, such as the duration of stay and the right to participate in government. Most countries have laws which designate a process for naturalization, by which immigrants may become citizens.

Immigration law in the USA

Visas in the United States can be broadly separated into two categories: one for people seeking to live in the US; termed Immigrant Visas, and the other for people coming for limited durations, termed Non-Immigrant Visas. The former visa has "per country-caps", and the latter does not. Most non-immigrant visas are for work purposes, and usually require an offer of employment from a US business. Such immigration may involve restriction such as a labor certification to ensure that no American workers are able to fill the role of the job, hence designed to protect wages and conditions.[9] Other categories include student, family and tourist visas.[10] Each visa category is further divided into numerous subcategories; the large number of specific categories has been recommended as a main area for comprehensive immigration reform.[11]

To control immigration, many countries set up customs at entry points. Some common location for entry points are airports and roads near the border. At the customs department, travel documents are inspected. Some required documents are a passport, an international certificate of vaccination and an onward ticket. Sometimes travelers are also required to declare or register the amount of money they are carrying.

This section is an attempt to classify and bring together information about immigration legislation on a number of countries with high immigration. 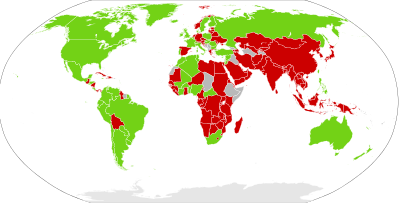 Countries where dual citizenship is allowed (green) and prohibited (red)

Immigration regulation is the control of the people, and their numbers, who may enter a nation's sovereign territory. It applies both to persons seeking to live and work in a particular nation (or part of it) and tourists, persons on layover due to travel issues, and those wishing to study or otherwise make use of a country's facilities.

Immigration control of one form or another is imposed by most countries. It is an inherent right of a sovereign state.