In Marxist theory and Marxian economics, the immiseration thesis (also referred to as emiseration thesis) is derived from Karl Marx's analysis of economic development in capitalism, implying that the nature of capitalist production stabilizes real wages, reducing wage growth relative to total value creation in the economy, leading to worsening alienation in the workplace.

The immiseration thesis is related to Marx's analysis of the rising organic composition of capital and reduced demand for labor relative to capital equipment as technology develops.

Concerning the evolution of the worker's living conditions, Marx argued that:

Within the capitalist system all methods for raising the social productivity of labour are put into effect at the cost of the individual worker [...] All means for the development of production undergo a dialectical inversion so that they become a means of domination and exploitation of the producers; they distort the worker into a fragment of a man, they degrade him to the level of an appendage of a machine, they destroy the actual content of his labour by turning it into a torment, they alienate from him the intellectual potentialities of the labour process [...], they transform his life into working-time, and his wife and child beneath the wheels of the juggernaut of capital. But all methods of the production of surplus-value are at the same time methods of accumulation, and every extension of accumulation becomes, conversely, a means for the development of these methods. It follows therefore that in proportion as capital accumulates, the situation of the worker, be his payment high or low, must grow worse. 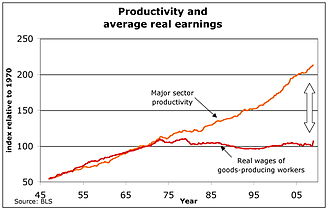 Wages after the mid 1970s in the US stayed stable, while productivity massively increased.

Marx argued that, in accordance with the labour theory of value, capitalist competition would necessitate the gradual replacement of workers with machines, allowing an increase in productivity, but with less overall value for each product produced, as more products can be made in a given amount of time, meaning that economic output would increase, but real wages would stay stable, because the input of human labour stays the same.

Marx also noted that this movement is not merely an abstract relation, but that it is a result of class struggle, and it could be temporarily stopped should wages dip below an amount that the proletariat deem acceptable.

The immiseration thesis was equally questioned by later theorists, notably by early members of the Frankfurt School. For Adorno and Horkheimer, state intervention in the economy had effectively abolished the tension in capitalism between the "relations of production" and "material productive forces of society"—a tension which, according to traditional Marxist theory, constituted the primary contradiction within capitalism. The previously "free" market (as an "unconscious" mechanism for the distribution of goods) and "irrevocable" private property of Marx's epoch have gradually been replaced by the centralized state planning and socialized ownership of the means of production in contemporary Western societies. The dialectic through which Marx predicted the emancipation of modern society is thus suppressed, effectively being subjugated to a positivist rationality of domination:

[G]one are the objective laws of the market which ruled in the actions of the entrepreneurs and tended toward catastrophe. Instead the conscious decision of the managing directors executes as results (which are more obligatory than the blindest price-mechanisms) the old law of value and hence the destiny of capitalism.[2]