Imperial Society for the Encouragement of the Arts 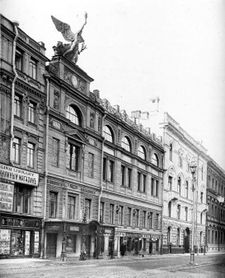 The Society's building in 1912, on Bolshaya Morskaya in Saint Petersburg; currently occupied by the Russian Artists' Union. It is a registered monument of the "Cultural Heritage of the Russian Federation"[1]

The Society was founded by a group of influential patrons (including Ivan Alexeyevich Gagarin, Pyotr Andreyevich Kikin and Alexander Ivanovich Dmitriev-Mamonov) with the aim of assisting development in the Fine Arts, the diffusion of knowledge related to the arts, and the education of painters and sculptors.[3] In 1833, Tsar Nicholas I formally confirmed the Society's existence by law and placed it under his personal protection.

Before then, many young artists benefited from Society grants that enabled them to study overseas. Among them were Karl Bryullov and Alexander Brullov in 1822, Alexander Ivanov in 1827 and Alexey Tyranov in 1830.[3] During the Society's existence, many students of the Imperial Academy of Arts also received financial support, including Vasily Vereshchagin, Firs Zhuravlev, Peter Clodt von Jürgensburg, Mikhail Clodt, Ivan Kramskoi, Lev Lagorio, Kirill Lemokh, Konstantin Makovsky, Leonid Solomatkin, Konstantin Flavitsky and Pavel Chistyakov. 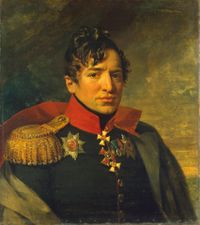 In 1892, the Society began publishing a magazine, Искусство и художественная промышленность (roughly: "Fine and Applied Arts"), which was replaced in 1901 by a monthly journal called Художественные сокровища России (Russian Art Treasures), edited by Alexandre Benois and Adrian Prakhov.[3] That same year, according to the Society's records, their exhibitions had attracted 56,000 visitors, works were sold to the value of 33,900 Rubles and there were 247 participating members.

In fact, after 1840, the Society was managed by various members of the family. Duke Maximilian held that position until 1851; followed by his wife, Grand Duchess Maria Nikolaevna (to 1875); his daughter, Princess Eugenia Maximilianovna (to 1915); and finally by Grand Duke Peter Nikolaevich (to 1917).[2] After the Revolution, the Society gave up its charitable activities and became a sort of art club with educational functions. In 1924, it came under control of the "State Academy of History of Material Culture" (GAIMK), which dissolved the Society in 1929 on the grounds of "non-conformance".[3]

The Drawing School was created by a decree of Tsar Nicholas I in 1839. At first, the school taught only sketching and drawing. Its objective was to enable artists to participate in crafts and industrial activities, as well as training teachers. Students were admitted all year and the lessons were free, until 1858 (when it was first operated by the Society), after which all but a few especially talented students had to pay a small fee. In 1889, a satellite school for low-income children was opened in the suburbs.[2]

In 1906, Nicholas Roerich was named Director.[2] He created workshops for sewing and weaving, iconography, ceramics and porcelain painting. In addition, he hired well-known artists as instructors, including Ivan Bilibin, Dmitry Kardovsky and Arkady Rylov.

After the October Revolution, all of the school's courses were consolidated into a single course on painting and technical drawing, taught free in a building on Liteyny Avenue. Later, the course was transferred to what became known as the Tavricheskaya Art School.