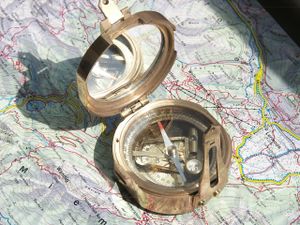 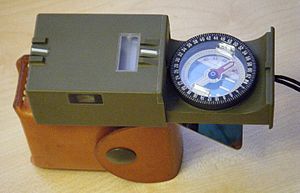 An inclinometer or clinometer is an instrument for measuring angles of slope (or tilt), elevation or depression of an object with respect to gravity. It is also known as a tilt meter, tilt indicator, slope alert, slope gauge, gradient meter, gradiometer, level gauge, level meter, declinometer, and pitch & roll indicator. Clinometers measure both inclines (positive slopes, as seen by an observer looking upwards) and declines (negative slopes, as seen by an observer looking downward) using three different units of measure: degrees, percent, and topo[disambiguation needed]. Astrolabes are inclinometers that were used for navigation and locating astronomical objects from ancient times to the Renaissance.

In aircraft, the "ball" in turn coordinators or turn and bank indicators is sometimes referred to as an inclinometer. 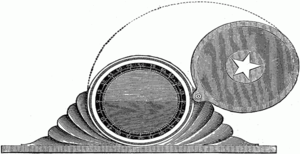 The Abney level is a handheld surveying instrument developed in the 1870s that includes a sighting tube and inclinometer, arranged so that the surveyor may align the sighting tube (and its crosshair) with the reflection of the bubble in the spirit level of the inclinometer when the line of sight is at the angle set on the inclinometer.

One of the more famous inclinometer installations was on the panel of the Ryan NYP "The Spirit of St. Louis" - in 1927 Charles Lindbergh chose the lightweight Rieker Inc P-1057 Degree Inclinometer to give him climb and descent angle information.

File:Measuring Slope With a Clinometer 2.JPG
Measuring slope with a clinometer

The forester stands at a fixed distance from the base of the tree. The most common distances in the United States are 50 feet (15.24 m) and 66 feet (20.12 m).[1] To obtain accurate readings it is best to use taped measured distance instead of paced distances. For the most accurate readings it is best to use a distance that is not less than the height of the tree being measured,[2] that is, that the clinometer will measure an angle less than 45° (100%).

There is still some error in this number, because the distance is measured along the ground, and is not the actual horizontal distance. By standing at the base of the tree, the observer should mark his/her eye level. They then stand back, and find the slope expressed as a degree to the mark. This is the slope of the ground. By taking the cosine of that number, and multiplying it with the previous number, the observer will calculate the height of the tree.

The observer must always measure a leaning tree so that the tree is leaning to the left or right. Measurements should never be taken with the tree leaning toward or away from the observer because this will affect their accuracy because of foreshortening.

The clinometer is also commonly used by foresters to obtain the percent slope of terrain. This measurement is based on the same trigonometric principles described above. Slope measurements, however, require that both observer and target be a constant height above the ground; thus a range pole or height of measurement (HI) stick is often used in slope measurements.

Certain highly sensitive electronic inclinometer sensors can achieve an output resolution to 0.0001 degrees - depending on the technology and angle range, it may be limited to 0.01º. An inclinometer sensor's true or absolute accuracy (which is the combined total error), however, is a combination of initial sets of sensor zero offset and sensitivity, sensor linearity, hysteresis, repeatability, and the temperature drifts of zero and sensitivity - electronic inclinometers accuracy can typically range from .01º to ±2º depending on the sensor and situation. Typically in room ambient conditions the accuracy is limited to the sensor linearity specification.

Tilt sensors and inclinometers generate an artificial horizon and measure angular tilt with respect to this horizon. They are used in cameras, aircraft flight controls, automobile security systems, and speciality switches and are also used for platform leveling, boom angle indication, and in other applications requiring measurement of tilt.

Important specifications to consider when searching for tilt sensors and inclinometers are the tilt angle range and number of axes (which are usually, but not always, orthogonal). The tilt angle range is the range of desired linear output.

Tilt sensor technology has also been implemented in video games. Yoshi's Universal Gravitation and Kirby Tilt 'n' Tumble are both built around a tilt sensor mechanism, which is built into the cartridge. The PlayStation 3 and Wii game controllers also use tilt as a means to play video games.

Inclinometers are also used in civil engineering, for example to measure the inclination of land to be built upon.

Some inclinometers provide an electronic interface based on CAN (Controller Area Network). In addition, those inclinometers may support the standardized CANopen profile (CiA 410). In this case, these inclinometers are compatible and partly interchangeable. 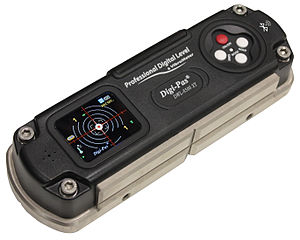 Typical advantages of using 2-Axis inclinometers over conventional single-axis ‘bubble’ or mechanical leveling instruments may include:

Inclinometers are used for: