From Infogalactic: the planetary knowledge core
Jump to: navigation, search
For other uses, see Independence (disambiguation). 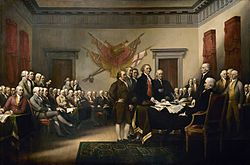 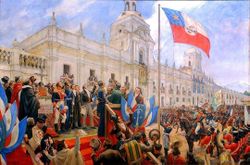 Chile, one of several Spanish colonies in South America, issued a Declaration of independence in 1818

Independence is a condition of a nation, country, or state in which its residents and population, or some portion thereof, exercise self-government, and usually sovereignty, over the territory. The opposite of independence is a dependent territory. Independence does not necessarily mean freedom.

Whether the attainment of independence is different from revolution has long been contested, and has often been debated over the question of violence as a legitimate means to achieving sovereignty.[1] While some revolutions seek and achieve national independence, others aim only to redistribute power — with or without an element of emancipation, such as in democratization — within a state, which as such may remain unaltered. Nation-states have been granted independence without any revolutionary acts.[citation needed] The Russian October Revolution, for example, was not intended to seek national independence (though it merely transformed government for much of the former Russian Empire, it did result in independence for Poland, Finland, Lithuania, Latvia and Estonia). However, the American Revolutionary War was intended to achieve independence from the beginning.

Autonomy refers to a kind of independence which has been granted by an overseeing authority that itself still retains ultimate authority over that territory (see Devolution). A protectorate refers to an autonomous region that depends upon a larger government for its protection as an autonomous region. The dates of established independence (or, less commonly, the commencement of revolution), are typically celebrated as a national holiday known as an independence day.

Historically, there have been three major periods of declaring independence:

Causes for a country or province wishing to seek independence are many. The means can extend from peaceful demonstrations, like in the case of the Indian independence movement, to a violent civil war.

The dates of independence, as they have been ported into many articles from the CIA World Factbook are defined as follows:

For most countries, [the given date is that] when sovereignty was achieved...For the other countries, the date given may not represent "independence" in the strict sense, but rather some significant nationhood event such as the traditional founding date or the date of unification, federation, confederation, establishment, or fundamental change in the form of government, such as state succession.