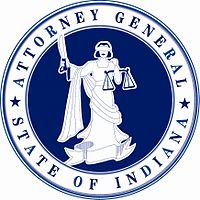 Seal of the Attorney General of Indiana

The Indiana Attorney General is the chief legal officer of the State of Indiana in the United States. Attorneys General are chosen by a statewide general election to serve for a four-year term. The forty-second and current[update] Attorney General is Greg Zoeller.