The Indiana Daily Student (IDS) is an independent, student-run newspaper that has been published for the community of Indiana University in Bloomington, Indiana since 1867. The IDS is free and distributed throughout the campus and city.

At its founding on February 22, 1867, the paper was originally known as the Indiana Student and was published twice a month by half a dozen students. It ceased publication in 1874 due to financial difficulties but student William Lowe Bryan, who would later become IU's 10th president, relaunched it in 1882. In 1897, Florence Reid Myrick became the paper's first female editor-in-chief. In 1899, the newspaper was renamed the Daily Student. 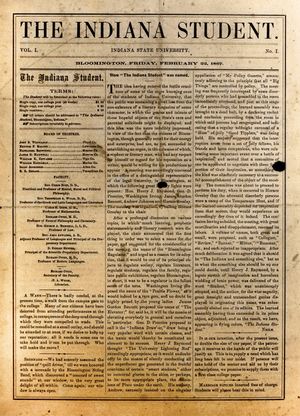 The first issue of the Indiana Daily Student, published on February 22, 1867. The IDS was first published under the name The Indiana Student

The university gained ownership of the Daily Student in 1910 and used it as a journalism lab. In 1911, the School of Journalism was formed. That same year, the school required every journalism student to work on the paper. Students received course credit and a grade for their work. Serving as editor-in-chief required 15 credit hours, but in 1905, the position became a paid job. In 1914, the paper was renamed to its current publication title, the Indiana Daily Student.

In September 1922, Ernie Pyle became editor-in-chief and later left IU a semester before graduation to work at a paper in LaPorte, Indiana.

On December 7, 1941, the IDS ran an extra on the bombing of Pearl Harbor, and is one of two known college newspapers to publish that afternoon.

The IDS moved to its current home, Ernie Pyle Hall, in 1954. The building is renamed is honor of Pyle, who was shot and killed in World War II in 1945. His desk sits in the newsroom. The building is also home to the School of Journalism.

On July 1, 1969, the paper adopted its charter and became financially and editorially independent from the University. Journalism students were no longer required to work for the paper.

Students paid for an IDS subscription until 1973, when it became free. Due to declining revenue, the IDS began charging a quarter per issue in the spring of 1981. Up until 1995, it was only one of two college papers that still charged a fee. That fall, the IDS was once again free for students and the community. The IDS is funded exclusively through student-generated advertising.

In the summer of 1996, the IDS launched its website, the Indiana Digital Student, now known as idsnews.com

In October 2005, the IU-Bloomington Chancellor adopted a revised charter, combining the IDS and Arbutus yearbook charter, which was established in 1981, and changed the publisher's title to Director of Student Media.

The IDS employs more than 200 students; 12 professional staff members serve as advisers. The IDS is the third largest employer of students on campus.

The student editor-in-chief is selected by a publications board that includes professional journalists and student representatives. The editor changes every semester – fall, spring and summer. Once selected, the editor chooses managing editors and desk editors for the semester through an application process. Staff members are drawn from all majors, and many major in the IU School of Journalism.

New writers, photographers, page designers, copy editors and web content producers are accepted on a rolling basis. Advertising sales representatives are usually hired in December and January. Creative, Marketing and Distribution typically hire new staffers at the end of every semester. Opinion columnists are also hired at the beginning or end of the semester. Writers are paid per story, photographers per photo that runs in the newspaper, designers per page they design and copy editors per hour.

The Indiana Daily Student's website, idsnews.com, features all paper content in a digital format, as well as multimedia such as videos, photo galleries, and audio slideshows. The website serves as a way to release breaking news and allow readers to interact through online comments.

The IDS also hosts a number of blogs for user forums and additional content. "Hoosier Hype" covers all IU sports. The blog launched in the fall of 2009 and aggregated content from previous sports blogs, such as "Basketblog", to include all IU athletics. The site hosts live chats during IU sports games to create a conversation between the IDS's sports staff and its readers.

"Live Buzz" covers live entertainment in Bloomington with information on upcoming concerts and music venues, as well as interviews with local and visiting bands and musicians.

The opinion desk's blog, "The Sample Gates", features content from columnists and editors on current events. BlogNetNews recognizes the "Sample Gates" on its Indiana Political Blogwire.

Launched in the spring of 2012, "Collegiate Brand News" is a satirical blog that features fake news and photos reflecting current events and student life at IU.

The IDS photo blog, "Focus", is home to work from IDS photographers.

Over the years, the IDS has garnered numerous national, regional and state honors. It is a consistent winner of the Associated Collegiate Press Pacemaker Award and the Columbia Scholastic Press Association Gold Crown Award.

The IDS is an affiliate of UWIRE.[1]