In 1917, Indiana University started offering courses in downtown Fort Wayne to 142 students in 12 courses. At a separate downtown location, Purdue University permanently established the Purdue University Center in 1941 to provide a site in Fort Wayne for students to begin their undergraduate studies prior to transferring to the West Lafayette main campus to complete their degree.[4]

Under the direction of Purdue University President Frederick Hovde, Indiana University President Herman Wells, IU trustee John Hastings, and Purdue trustee Alfred Kettler Sr., the Indiana University and Purdue University extension centers began merging in 1958 via the formation of the Indiana–Purdue Foundation. To serve the extension centers' now combined mission in Fort Wayne, the Indiana–Purdue Foundation acquired a 99-year lease on agricultural land owned by Allen County to form a campus totaling 114 acres (0.46 km2) at the then-suburban northeast edge of Fort Wayne on the eastern bank of the St. Joseph River. Indiana University – Purdue University Fort Wayne opened on September 17, 1964, following nearly two years of construction that began on October 18, 1962. The first all-inclusive building on campus was known as the Education Building, but it has since been renamed Kettler Hall in honor of the combined university's chief advocate. Kettler's vision and passion during the 1950s made IPFW possible. IPFW awarded its first four-year degree in 1968 after awarding two-year degrees through the IU and Purdue Fort Wayne extension centers prior to the formation of the joint IPFW campus.[4]

In 1988, a coalition of the then-Lincoln National Corporation under the direction of Ian Rolland, the M.E. Raker Foundation, the Olive B. Cole Foundation, and the Foellinger Foundation purchased an additional 152 acres (0.62 km2) on the west bank of the St. Joseph River, known as the former McKay Family Farm. In 2007, the State of Indiana completed the process of closing the Fort Wayne State Developmental Center. A portion of the grounds had been transferred to IPFW years earlier for construction of the Northeast Indiana Innovation Center. The remaining property and buildings of the 142-acre (0.57 km2) developmental center was transferred later in 2007, with the land split between IPFW (40 acres (0.16 km2)) and Ivy Tech Community College (45 acres (0.18 km2)). 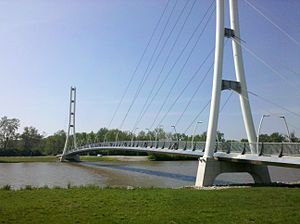 The Research-Incubator Campus, bounded by St. Joe Road to the west, Stellhorn Road to the south, Dean Drive to the north, and Sirlin Drive to the east includes the Northeast Indiana Innovation Center, a business incubator for entrepreneurs. This area of the campus was acquired in 2007 after the Fort Wayne State Developmental Center's closure,[5] with the land donated between IPFW and Ivy Tech Community College of Indiana.

The former McKay Family Farm, located on the western bank of the St. Joseph River, is bounded by East Coliseum Boulevard to the south, St. Joseph River to the east, and development to the north and west. The Plex indoor soccer facility, Hefner Soccer Complex, Holiday Inn hotel, and Steel Dynamics Keith E. Busse Alumni Center are located on this portion of the campus, connected to the main academic campus via the pedestrian-only Ron Venderly Family Bridge. The Holiday Inn operates on property leased from the Indiana–Purdue Foundation, and is affiliated with IPFW's Hospitality Management Program.[6]

For 3 years a grant through the state of Indiana provided bus service between the student housing and the campus but as of 2015 that program has been cancelled. Pedestrian and bicycling traffic are also accommodated through the university's direct connection with the Fort Wayne Rivergreenway, a designated National Recreation Trail.[7] The trail is part of the larger 70 miles (110 km) Fort Wayne Trail Network.[8]

The IPFW Japanese Saturday School (JSS; フォートウェイン補習授業校 Fōtowein Hoshū Jugyō Kō), a weekend Japanese educational program designated by the Japanese Ministry of Education,[9] is affiliated with the university and holds its classes on the university campus. It was established in 2006.[10]

IPFW buildings generally feature brick in various shades of brown or tan, a nod to the brick façades of Purdue University's West Lafayette campus buildings. This contrasts with IPFW's sibling university, Indiana University – Purdue University Indianapolis, where the buildings generally feature Indiana limestone façades mimicking Indiana University Bloomington's academic buildings. The grounds at IPFW are manicured and landscaped as a multiple-hundred-acre park due in part to the generosity of Virginia Ayers, an avid long-time exerciser on campus who willed her estate to IPFW upon her death in 1986 (IPFW University ArchivesArchived at WebCite).

IPFW operated a satellite facility in Warsaw, Indiana (about 40 miles (64 km) northwest of the main campus) from 2003 to 2013. IPFW Warsaw Center was closed due to improved distance learning technologies and increasing reliance on e-learning.[11]

IPFW is governed in various ways via the Purdue University Board of Trustees, the Indiana University Board of Trustees, and the IPFW Faculty Senate. Purdue serves as the fiscal agent for IPFW's budget and substantially represents IPFW during budgetary negotiations with the Indiana General Assembly. The Indiana–Purdue Foundation owns most of the land that constitutes IPFW and has entered into a 99-year lease with Allen County for additional land for US $1. The IPFW Faculty Senate represents the faculty in the university's shared governance model. The desire was so strong for an expansion of IPFW during the 1980s, the Faculty Senate and Indiana–Purdue Foundation explored the full independence from both Purdue and IU, not entirely unlike the University of Southern Indiana's independence from Indiana State University in 1985. Since then, relations with Purdue have improved, as has the level of funding from the State of Indiana. However, due to the institution's continued growth, particularly since 2006,[12] the Indiana Senate may reconsider granting the school its independence.[13] IPFW was designated Indiana's Multisystem Metropolitan University by the Indiana General Assembly in May 2015.[14]

IPFW is selective, accepting 82.1 percent of applicants for the fall 2012 semester. The university has a student-to-teacher ratio of 17:1, with 51 percent of classes holding 20 or fewer students (2.9 percent have classes with 50 or more students).[15]

Either Purdue or IU awards IPFW's degrees on a program-by-program basis. IPFW's colleges, schools, and divisions are not each identified specifically as IU units or as Purdue units. Through an agreement between the IU and Purdue trustees, most of IPFW's university services are administratively operated through Purdue's processes. This is in contrast to IPFW's sibling university, Indiana University – Purdue University Indianapolis (IUPUI), where IUPUI is a core campus of the Indiana University System, where IUPUI's university services are administratively operated through the Indiana University System, and where IUPUI's schools and academic divisions are each strongly identified by name as IU or Purdue aligned.

For those students intending to receive their diploma at another campus of the Indiana University System or Purdue University System, these students may fulfill their freshman, sophomore, or even junior courses at IPFW before transferring to another campus elsewhere in the system to complete their degrees in majors not offered at IPFW. For instance, aeronautical and astronautical engineering is not an offering at IPFW, but many mechanical engineering courses apply through the sophomore year. In recent years, more students have opted to complete their degrees on the Fort Wayne campus.

The Walter E. Helmke Library, the only public university library in northeast Indiana, was dedicated in 1977 and covers 113,000 square feet (10,500 m2). Ground was broken in 2009 for a new US $42.4 million Student Services Complex, extending the second floor Learning Commons through a 265 feet (81 m)-long glass-enclosed elevated walkway, connecting Helmke Library to Walb Student Union and Hilliard Gates Sports Center. In November 2011, the Student Services Complex and Learning Commons were opened for use. The Learning Commons includes librarian research consulting, the Writing Center, IT services computing, and areas for group and individual study.[17]

The IPFW Japanese Saturday School (JSS; フォートウェイン補習授業校 Fōtowein Hoshū Jugyō Kō), a weekend Japanese educational program designated by the Japanese Ministry of Education,[19] is affiliated with IPFW and holds its classes on the university campus. It was established in 2006.[10] 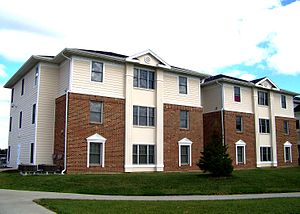 IPFW is predominately a commuter school, with only six percent of the student body living in university-operated housing and 94 percent living off campus; 99 percent of students have cars on campus.[15] Beginning with fall semester 2004, the university introduced student dormitories on the Waterfield Campus. Phase II of the student housing initiative continued with two more buildings in August 2007, with total student housing occupancy approaching nearly 750 residents. Phase III of the project, which opened in August 2010, added 448 beds divided between four new residence buildings, bringing total occupancy to more than 1,200 students. Another student community center, The Clubhouse, a larger version of the existing Cole Commons, and a maintenance facility were also added.[20]

The Communicator is IPFW’s student newspaper.[21] College Access Television is operated by IPFW and is one of five educational-access television channels serving Fort Wayne and Allen County. CATV is available on Frontier Communications and Comcast cable systems and serves as the higher education cable access channel and provides opportunities in higher education for area residents.[22] The university leases a portion of its East Campus, at the East Coliseum Boulevard and Crescent Avenue intersection, to northeast Indiana's PBS member station, WFWA-TV.[23]

IPFW student athletes compete as a National Collegiate Athletic Association Division I school in The Summit League, and in the Midwestern Intercollegiate Volleyball Association for men's volleyball. The university participates in 14 men's and women's sports. Before joining NCAA Division I athletics, IPFW competed in the Great Lakes Valley Conference in the NCAA Division II.

Tapestry: A Day for You

Tapestry: A Day for You hosts guest speakers and conducts break-out sessions that are mindful of women's empowerment at the Allen County War Memorial Coliseum. Tapestry proceeds support the Tapestry Parkview Endowment Fund and the Tapestry gift account and provide scholarships to students studying health sciences at IPFW. Since its beginning in 2002, Tapestry has raised more than $675,000 in scholarship funds and awarded 50 scholarships. Featured keynote speakers have included Dana Reeve, Linda Ellerbee, Patty Duke, Marie Osmond, and Clinton Kelly.[26]

IPFW includes 55,000 alumni, 80 percent of which currently live and work in northeast Indiana.[1]