The dual-track system is open to the public and operates around the clock, taking 5 minutes in each direction.[5] During the daytime, a train departs automatically every six minutes.[5] It is notable for being the only private transportation system in the United States constructed to run above public streets.[6][1]

In 1997, the three hospital operations were combined under Indiana law creating a shared staff of over 10,000 employees who could be required to travel between the campuses. Commuting between the three sites was complicated and required the crossing of the Interstate 65 highway by shuttle buses.

In May 2000, a Health Care Transportation System Franchise Agreement was signed, followed by the People Mover – State of Indiana Airspace Agreement and Lease in November 2000 to allow crossing under the Interstate 65 highway for a period of 25 years.[6] 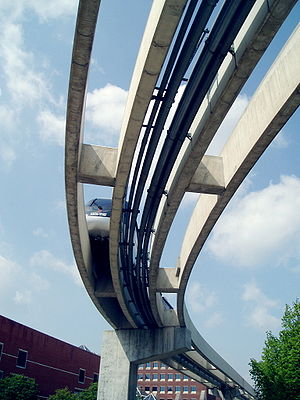 The large gap between the rails avoids collecting snow. In the center are pneumatic tubes for document and sample transfer.[1]

The system was constructed by Schwager Davis Inc. (SDI) from San Jose, California, to their Unitrak standard.[6]

There are two separate parallel elevated guideways side-by-side, both of which operate in both directions. The concrete rails have a gap between them, designed to combat winter snow and the people mover is therefore not technically a monorail.[5]

Each of the two tracks carries a train with three carriages for a total capacity of 81 passengers. Each train weighs 45,000 pounds (20 t) and has twenty-four passenger seats across the three cars. The rest of the passenger capacity is made up of standing places.[5]

During the night-time, one track is closed between 18:00–05:30[clarification needed] for maintenance, with the second train/track operated in on-demand mode by elevator-style call buttons.[7]