The classes were offered at Central High School in downtown South Bend and within a few years enrollment reached 500. Classes were taught by local high school teachers with master's degrees and occasionally by Bloomington faculty who traveled once a week for class.

The university appointed a resident director in 1940. Lynton Keith Caldwell, then a graduate student at the University of Chicago, took on the job. In 1941, Ernest Gerkin was named the first permanent full-time faculty member. Donald Carmony became the director from 1944 to 1950, followed by Jack Detzler, who remained in the job until 1964. In 1961 the first IU South Bend building was constructed on newly acquired land on the north shore of the St. Joseph River. It was first named the IU Center. In 1962 it was renamed the South Bend-Mishawaka Campus. In 1965, Lester Wolfson was appointed director and assistant dean of the campus. Wolfson was named chancellor in 1969 and his leadership continued until his retirement in 1987. Four year degree programs were authorized in 1965 and the campus awarded its first degrees in 1967. Thirty-one students graduated the first year.

The campus was named "Indiana University South Bend" in 1968. The first master's degrees were conferred in 1970. Enrollment exceeded 5,000 in 1971 and the addition to Northside Hall was opened in 1972. The purchase of the Associates Building (now known as the Administration Building) was completed in 1975. Groundbreaking for the Franklin D. Schurz Library was in 1986 and it opened in 1989. Chancellor Wolfson retired in 1987 and H. Daniel Cohen was named chancellor. Cohen concentrated on improving facilities, grounds and programming. In 1994, the university purchased the former Playland Park, a 26.5 acre parcel on the south side of the St. Joseph River. Playland had been an amusement park, a golf course, and a ballpark. Cohn resigned in 1995 and long-time history professor, Lester C. Lamon, assumed the position of acting chancellor for two years until Kenneth L. Perrin was named chancellor. 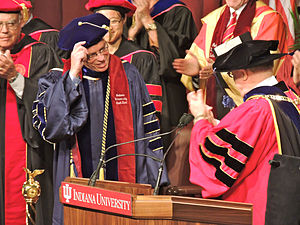 Perrin retired in 2002 and Una Mae Reck was named chancellor. Reck was formerly the vice president for academic affairs at the State University of New York at Fredonia. During Reck's administration a number of major projects were completed - student housing, a bridge connecting the campus to student housing across the St. Joseph River, the Elkhart Center, remodeling of the administration building, and the $22 million renovation of the Education and Arts Building. Upon Reck's retirement in Spring 2014, Terry L. Allison became the fifth chancellor of IU South Bend. Previously, Allison served as provost and vice president at Governor's State University in Illinois where he was also a professor of English.

IU South Bend is on a pedestrian mall on the St. Joseph River. When the campus opened in the 1960s, it featured two buildings: Northside Hall and Greenlawn Hall, a former tool and die factory. Growing over 50 years, the campus now consists of 11 buildings, including River Crossing student housing, the Franklin D. Schurz Library, the Education and Arts Building, and the 100,000 square foot (9,000 m²) Student Activities Center (SAC). The university also owns 26 acres (110,000 m2) on the south bank of the St. Joseph River where student housing is located. 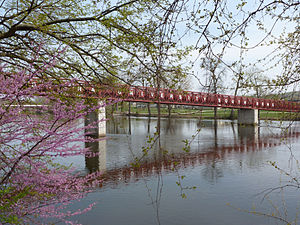 A pedestrian bridge that bears the words "Indiana University South Bend" connects the main campus with the athletic fields across the river. Construction of the bridge began in December 2005 and was completed in September 2006. On September 22, 2006, the Indiana University Board of Trustees voted to approve student housing for IU South Bend, to be located across the river. The housing facilities opened in the fall of 2008, consisting of 400 beds in eight apartment-style units, along with a community building.

Note: List of buildings at IU South Bend is in chronological order.

Northside Hall opened in 1961 and was the first-and for a long time- and primary building on campus. Northside included not only classrooms and laboratories, but most of the campus' office as well as the library and the auditorium. Various professors and administrators had their office in the houses surrounding the building in the neighborhood.

Greenlawn Hall was the home of the former Hutchins Tool and Die Company. Greenlawn was purchased in 1966 and was opened to provide more classroom space. It was condemned in 2013, and it was torn down in April 2015.

Riverside Hall was IU South Bend's fourth building and was completed in 1969 to house the Dental Education program.

Associates Building was purchased from the Associates Insurance Corporation in 1975 with an agreement the Associates Corporation would be able to have access to the buildings on a "temporary, rolling basis." (see also "Administration Building" above) IU South Bend moved into the building in 1977 and added to it in 1986. After a $22 million renovation, it is now known as the Education and Arts Building.

Fine Arts Building was originally the Stanz Cheeze Processing Plant. The building was purchased in the 1980s and was built circa 1950s.

Franklin D. Schurz Library was built in 1989 (ground broken in 1987). Franklin D. Schurz, chairman of the board of Schurz Communications, Inc., a media broadcasting company as well as former editor and publisher of The South Bend Tribune, gave IU South Bend generous donations to complete the construction of the building. Other monies were provided by rental income from the Associates Building's computer facility and the Indiana state bonding authority. In addition, then library director, James Mullins made significant efforts towards the building of the new library (note: this marked the library as having its own building for the first time- having moved out of Northside Hall).

Purdue Technology Building: The Purdue Technology Building dedication was held October 28, 1993. Purdue School of Technology courses have been offered continuously since the 1933, with two year diplomas being awarded for the first time locally in 1986. IU South Bend acquired and renovated the former Army Reserve Center adjacent to the campus on Northside Boulevard, with new classrooms and technology laboratories for Purdue University programs.

Wiekamp Hall: April 14, 1994 was the groundbreaking for the Dorothy and Darwin Wiekamp Hall housed classrooms and offices; the first purpose-built classroom facility added to the campus in more than thirty years. Dedicated in 1998, it is – with Northside Hall – the largest building for classrooms on campus. (note: Wiekamp is the site of the former Coca Cola Bottling Factory, which was torn down to build Wiekamp Hall)

Student Activities Center groundbreaking was September 25, 1999. Dedicated in 2004, it serves as the primary center for student offices and activities, including the Student Government Center, the student newspaper, meeting rooms, a cafe, a workout facility, basketball, and racquetball courts.

River Crossing Campus Apartments were dedicated in August 2008. This marked the first time that IU South Bend students had standalone on-campus housing. the land is directly across the St. Joseph River from the campus, connected by a pedestrian bridge. The land, the former Playland Park (23 acres) had been purchased in 1994.

Education and Arts Building: The Associates Building underwent a $22 million facelift beginning in June of 2011. The 125,000 square foot building was built in 1958 and purchased from the Associates Corporation in 1975. The Education and Arts Building houses the School of Education, the Ermestine M. Raclin School of the Arts (Fine Arts), and the Dental Hygiene program of the College of Health Sciences. The building also houses classrooms, offices, a 130-seat lecture room, rehearsal and art studios, and the dental clinic.

Indiana University South Bend also has a branch of the Purdue University College of Technology.

The Franklin D. Schurz Library serves as the information commons and intellectual center for the IU South Bend campus. As the focal point for inquiry and study, the library strives to provide resources and services to meet the information and research needs of students, faculty, and staff. The collection includes nearly 600,000 print books, bound journals, and government publications; over 350,000 e-books, more than 7,700 audio/video recordings; the campus archives; and special collections such as the James Lewis Casaday Theatre Collection and the Christianson Lincoln Collection. The library subscribes to over 300 databases which provide access to full-text articles and e-books. Nearly all of these electronic resources are accessible from student labs, apartments, offices, and home via the library website. The Schurz Library is part of the IU Libraries system, which is one of the largest university library systems in the country. Students and faculty can request materials from any of the eight IU Libraries.[1]

The Hammes Information Commons on the first floor houses a computer laboratory, as well as equipment for those with disabilities.

The library also includes The Wiekamp Educational Resource Commons, located centrally in the Education & Arts Building. It is a curriculum based library designed to support the Indiana University South Bend School of Education by providing core collection educational materials for pre-service and practicing preschool through 12th grade teachers. A wide variety of high quality instructional materials for inspection, review, evaluation and utilization in the implementation of instructional plans is included in the collection. Materials reflect cultural diversity and promote respect and appreciation for global cultures and communities. A production work-space, and a wide variety of equipment is available for student and community use in creating educational aids.

IU South Bend's enrollment in the fall semester of 2013 was 7,512 undergraduate students and 561 graduate students with a total of 8,073, of whom 69.1 percent were full-time. Females account for 62 percent of the student population while males account for 38 percent. Minorities make up 16 percent of the student population and international students 2 percent. About $61 million in financial aid was distributed to 49 percent of students or 9,423 students in 2012–13. IU South Bend students have an average age of 25 with 32% of the undergraduate student body age 25 or older; 81% are Indiana residents.[2]

The Office of Student Life oversees all student-administered interests. There are a variety of on- and off-campus activities sponsored by the university. More than 100 clubs and student organizations exist, including the Student Government Association, Titan Productions, political and spiritual groups.

The Student Government Association (SGA) consists of 12 senators, a president, a vice president, a secretary, and a treasurer. SGA allocates student activity funds and serves as a student voice for the administration. The Student Government Judicial Council interprets and provides guidance on the SGA Constitution and Policies, consisting of a chief justice and four associate justices.[3]

Titan Productions is a student organization funded through the Student Activity Fee (SAF) whose purpose is to plan and present non-academic entertainment and programs primarily for the student body of IU South Bend. The organization hosts movie nights and special entertainment on campus.[4]

Fall 2008 marked the first semester of which the university offered student housing. The River Crossing Apartments are located along the St. Joseph River. They are a short walk across the pedestrian bridge from campus classes, the Franklin D. Schurz Library, and Northside Hall. The housing complex includes walking trails, bicycle paths, and recreational fields. As of 2013-2014, 5.5 percent of the student body lived in college-owned housing.

Notable faculty of IU South Bend include Alexander Toradze,[8] the celebrated concert pianist, master teacher[9] and founder of the multi-national Toradze Piano Studio at IUSB. The Toradze studio has received high praise for their contributions to the piano world, and has developed into a worldwide touring ensemble that has gathered critical acclaim on an international level.[8][10][11] Lester Lamon is a nationally known civil rights historian and author.[12] Tuck Langland, who recently retired, is a well known sculptor in the United States.[13] Several of his pieces are strewn throughout the campus.