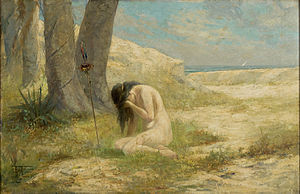 Indianism (in Portuguese: Indianismo) is a Brazilian literary and artistic movement that reached its peak during the first stages of Romanticism, though it had been present in Brazilian literature since the Baroque period.

In Romantic contexts, it is called "the first generation of Brazilian Romanticism", being succeeded by the "Ultra-Romanticism" and the "Condorism".

After the independence of Brazil from Portugal in 1822, a heavy wave of nationalism spread through the Brazilian people. Inspired by this, poets and writers began to search for an entity that could represent and personify the newly created Brazilian nation.

Indianist works are characterized by always having an Indian as the protagonist. The poetry is very patriotic and nationalistic, exalting Brazilian fauna, flora, riches and people.