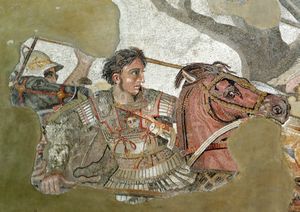 Alexander the Great in battle against the Persian King Darius (Pompeii mosaic, probably after a lost 3rd-century BC painting)

Indica (Greek: Ινδική Indikí) is the name of a short book about India written by Arrian, one of the main ancient historians of Alexander the Great. The book mainly tells the story of Alexander's officer Nearchus’ voyage from India to the Persian Gulf after Alexander the Great’s conquest of the Indus Valley. However, much of the importance of the work comes from Arrian’s in depth asides describing the history, geography, and culture of the ancient Indian subcontinent. Arrian wrote his Indica in the Ionic dialect, taking Herodotus for his literary mode.

Indica is also the name of a similar book by Megasthenes that also describes the history of India and was a major source from which Arrian drew.

Indica deals with the period of Alexander the Great. After Alexander conquered the Indus Valley, he planned to return to the center of his empire in Babylon. Alexander planned to return himself over land but wanted to learn about the mouth of the Indus (which he himself did not reach) and the sea between India and Babylon. Therefore, he sent one of his officers, Nearchus, to perform such a voyage and report what he saw. Indica mostly describes what Nearchus saw on that voyage.

Indica was written by Megasthenes, a Greek historian, philosopher, and statesman during the Roman period. Arrian lived from c. 95-175 CE mostly in Asia Minor and Athens. Therefore, he was writing about events that occurred several hundreds of years before his time (see Sources). He is still seen as one of the foremost ancient historians of Alexander the Great.

Indica begins with a description of the geography of India, in particular focusing on the size of the rivers Indus and the Ganges, together with their tributaries. A comparison is made with the Danube and the Nile.

The text then proceeds to tell the stories of Heracles and Dionysus in India.

Indica also describes the classes of occupation that the Indians have and their overall social structure. The text also describes their manner of hunting (which includes a description of many of the great fauna of India) and making war.

The text then moves into the story of Nearchus’ voyage from India to Babylon following the conquests of Alexander the Great. From this point onwards, the text mostly tells the story of a naval adventure. However, Arrian leaves the main story from time to time to tell in detail about the various peoples that lived along the way, as of the Ichthyophagi. Occasionally, Arrian describes Nearchus’ soldiers’ battles with the local people.

The book ends with Nearchus meeting up with Alexander the Great, who had been conducting his own land voyage from India to Susa. Nearchus is congratulated for a safe journey and rewarded for his efforts.

Arrian draws upon a number of ancient sources in composing his Indica. His main source is the account written by Nearchus himself. This text is now mostly lost, but it appears that Arrian had an extant and complete copy in his own time. Because Arrian was in part cribbing from a primary source, Arrian manages to be quite accurate despite being several hundred years removed from the events he describes.

Arrian also drew on a number of other ancient writers, including Eratosthenes and, most notably, Megasthenes (whose own book was also named Indica).

As a historical source

Indica’s importance as a historical source can be judged in three ways: (1) as fact, (2) as a reflection of Alexander’s campaign’s influence on human knowledge, and (3) as a window onto Greek and Roman knowledge.

The detailed aside stories in Indica are not completely accurate. Though they are certainly accurate or close to accurate on a wide variety of topics (sometimes more so than other ancient texts, sometimes less so), Indica in no way can be compared with our modern knowledge of the areas and peoples it describes.

However, it would be a mistake to stop the inquiry there. For though Arrian is not always accurate regarding the details of his stories, he is rather close to the truth on the ‘’existence’’ of the things he describes. Because this is a story of discovery rather than detailed scientific experiment and observation, the importance is that the text conveys to the reader the general existence of the Indus Delta, the breadth of the Indian Ocean, the existence of whales and other animals, and a general understanding of the people who live in the areas described.

Because local histories of some of the places described in Indica are not extent or widely available, Indica remains a valuable source of information regarding the ancient peoples of, for example, the Pakistani and Iranian coasts. 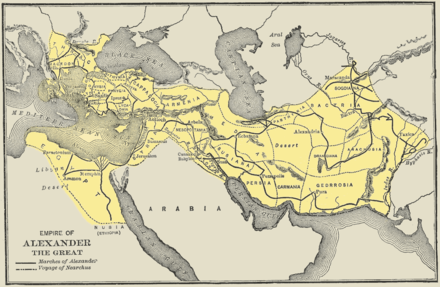 Map of Alexander's empire. Nearchus' journey, described in Indica, is shown as the dotted line through Indian Ocean from the Indus Delta to the Persian Gulf

Indica is important for showing how some of that knowledge was gained. The text makes clear that Alexander had high hopes for gaining and disseminating knowledge about his empire. Nearchus’ voyage explains how Alexander went about learning about the world and gives some insight into the amount of never before exchanged knowledge his conquests resulted in spreading.

Indica as a window onto Greek and Roman knowledge

The Indica gives the historian a good idea of how the Greeks and Romans saw India. Though, as stated above, everything in Indica is not completely factual in its details, it is useful to know what the Greeks and Romans thought of India and how they may have viewed it. Some descriptions about Indian people from the Indica: