From Infogalactic: the planetary knowledge core
Jump to: navigation, search
File:Simple-indifference-curves.svg
An example of an indifference map with three indifference curves represented

The theory of indifference curves was developed by Francis Ysidro Edgeworth, who explained in his 1881 book the mathematics needed for their drawing;[3] later on, Vilfredo Pareto was the first author to actually draw these curves, in his 1906 book.[4][5] The theory can be derived from William Stanley Jevons' ordinal utility theory, which posits that individuals can always rank any consumption bundles by order of preference.[6]

Map and properties of indifference curves

Assume that there are two consumption bundles A and B each containing two commodities x and y. A consumer can unambiguously determine that one and only one of the following is the case:
This axiom precludes the possibility that the consumer cannot decide,[8] It assumes that a consumer is able to make this comparison with respect to every conceivable bundle of goods.[7]

This is a consistency assumption.

This assumption is commonly called the "more is better" assumption.
An alternative version of this assumption requires that if A and B have the same quantity of one good, but A has more of the other, then A is preferred to B.

It also implies that the commodities are good rather than bad. Examples of bad commodities can be disease, pollution etc. because we always desire less of such things. 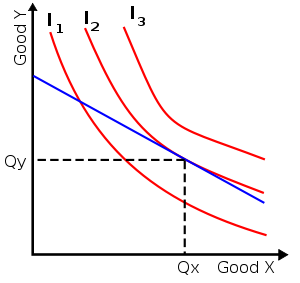 To maximise utility, a household should consume at (Qx, Qy). Assuming it does, a full demand schedule can be deduced as the price of one good fluctuates.

Consumer theory uses indifference curves and budget constraints to generate consumer demand curves. For a single consumer, this is a relatively simple process. First, let one good be an example market e.g., carrots, and let the other be a composite of all other goods. Budget constraints give a straight line on the indifference map showing all the possible distributions between the two goods; the point of maximum utility is then the point at which an indifference curve is tangent to the budget line (illustrated). This follows from common sense: if the market values a good more than the household, the household will sell it; if the market values a good less than the household, the household will buy it. The process then continues until the market's and household's marginal rates of substitution are equal.[10] Now, if the price of carrots were to change, and the price of all other goods were to remain constant, the gradient of the budget line would also change, leading to a different point of tangency and a different quantity demanded. These price / quantity combinations can then be used to deduce a full demand curve.[10] A line connecting all points of tangency between the indifference curve and the budget constraint is called the expansion path.[11]

. The negative slope of the indifference curve incorporates the willingness of the consumer to make trade offs.[9]

If two goods are perfect complements then the indifference curves will be L-shaped. Examples of perfect complements include left shoes compared to right shoes: the consumer is no better off having several right shoes if she has only one left shoe - additional right shoes have zero marginal utility without more left shoes, so bundles of goods differing only in the number of right shoes they include - however many - are equally preferred. The marginal rate of substitution is either zero or infinite. An example of the type of utility function that has an indifference map like that above is the Leontief function:

The different shapes of the curves imply different responses to a change in price as shown from demand analysis in consumer theory. The results will only be stated here. A price-budget-line change that kept a consumer in equilibrium on the same indifference curve:

Choice theory formally represents consumers by a preference relation, and use this representation to derive indifference curves showing combinations of equal preference to the consumer.

be a set of mutually exclusive alternatives among which a consumer can choose.

be generic elements of

In the language of the example above, the set

is made of combinations of apples and bananas. The symbol

is one such combination, such as 1 apple and 4 bananas and

is another combination such as 2 apples and 2 bananas.

, is a binary relation define on the set

is at least as good as

.' That is, one is indifferent to the choice of

is not weakly preferred to

is strictly preferred to

is complete if all pairs

is made up of all elements of

which are indifferent to

In the example above, an element

is made of two numbers: The number of apples, call it

and the number of bananas, call it

In utility theory, the utility function of an agent is a function that ranks all pairs of consumption bundles by order of preference (completeness) such that any set of three or more bundles forms a transitive relation. This means that for each bundle

there is a unique relation,

is called the utility function. The range of the function is a set of real numbers. The actual values of the function have no importance. Only the ranking of those values has content for the theory. More precisely, if

is described as at least as good as the bundle

is described as strictly preferred to the bundle

and take the total derivative of

or, without loss of generality,

is the partial derivative of

with respect to its first argument, evaluated at

The indifference curve through

. That is, when preferences are represented by a utility function, the indifference curves are the level curves of the utility function. Therefore, if one is to change the quantity of

, without moving off the indifference curve, one must also change the quantity of

such that, in the end, there is no change in U:

Thus, the ratio of marginal utilities gives the absolute value of the slope of the indifference curve at point

. This ratio is called the marginal rate of substitution between

If the utility function is of the form

then the marginal utility of

and the marginal utility of

. The slope of the indifference curve is, therefore,

Observe that the slope does not depend on

: the indifference curves are straight lines.

If the utility function is of the form

the marginal utility of

and the marginal utility of

. The slope of the indifference curve, and therefore the negative of the marginal rate of substitution, is then

A general CES (Constant Elasticity of Substitution) form is

. (The Cobb-Douglas is a special case of the CES utility, with

.) The marginal utilities are given by

Therefore, along an indifference curve,

These examples might be useful for modelling individual or aggregate demand.

As used in Biology, the indifference curve is a model for how animals 'decide' whether to perform a particular behavior, based on changes in two variables which can increase in intensity, one along the x-axis and the other along the y-axis. For example, the x-axis may measure the quantity of food available while the y-axis measures the risk involved in obtaining it. The indifference curve is drawn to predict the animal's behavior at various levels of risk and food availability.