Industrial ecology has been defined as a "systems-based, multidisciplinary discourse that seeks to understand emergent behaviour of complex integrated human/natural systems".[1] The field approaches issues of sustainability by examining problems from multiple perspectives, usually involving aspects of sociology, the environment, economy and technology. The name comes from the idea that the analogy of natural systems should be used as an aid in understanding how to design sustainable industrial systems.[2] 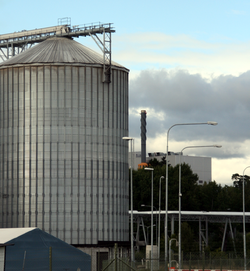 Example of Industrial Symbiosis. Waste steam from a waste incinerator (right) is piped to an ethanol plant (left) where it is used as in input to their production process.

Industrial ecology is concerned with the shifting of industrial process from linear (open loop) systems, in which resource and capital investments move through the system to become waste, to a closed loop system where wastes can become inputs for new processes.

Much of the research focuses on the following areas:[3]

Industrial ecology seeks to understand the way in which industrial systems (for example a factory, an ecoregion, or national or global economy) interact with the biosphere. Natural ecosystems provide a metaphor for understanding how different parts of industrial systems interact with one another, in an "ecosystem" based on resources and infrastructural capital rather than on natural capital. It seeks to exploit the idea that natural systems do not have waste in them to inspire sustainable design.

Along with more general energy conservation and material conservation goals, and redefining commodity markets and product stewardship relations strictly as a service economy, industrial ecology is one of the four objectives of Natural Capitalism. This strategy discourages forms of amoral purchasing arising from ignorance of what goes on at a distance and implies a political economy that values natural capital highly and relies on more instructional capital to design and maintain each unique industrial ecology.

Industrial ecology was popularized in 1989 in a Scientific American article by Robert Frosch and Nicholas E. Gallopoulos. Frosch and Gallopoulos' vision was "why would not our industrial system behave like an ecosystem, where the wastes of a species may be resource to another species? Why would not the outputs of an industry be the inputs of another, thus reducing use of raw materials, pollution, and saving on waste treatment?"[2] A notable example resides in a Danish industrial park in the city of Kalundborg. Here several linkages of byproducts and waste heat can be found between numerous entities such as a large power plant, an oil refinery, a pharmaceutical plant, a plasterboard factory, an enzyme manufacturer, a waste company and the city itself.[4]

One of the central principles of Industrial Ecology is the view that societal and technological systems are bounded within the biosphere, and do not exist outside of it. Ecology is used as a metaphor due to the observation that natural systems reuse materials and have a largely closed loop cycling of nutrients. Industrial Ecology approaches problems with the hypothesis that by using similar principles as natural systems, industrial systems can be improved to reduce their impact on the natural environment as well. The table shows the general metaphor.

The Kalundborg industrial park is located in Denmark. This industrial park is special because companies reuse each other's waste (which then becomes by-products). For example, the Energy E2 Asnæs Power Station produces gypsum as a by-product of the electricity generation process; this gypsum becomes a resource for the BPB Gyproc A/S which produces plasterboards.[4] This is one example of a system inspired by the biosphere-technosphere metaphor: in ecosystems, the waste from one organism is used as inputs to other organisms; in industrial systems, waste from a company is used as a resource by others.

Apart from the direct benefit of incorporating waste into the loop, the use of an eco-industrial park can be a means of making renewable energy generating plants, like Solar PV, more economical and environmentally friendly. In essence, this assists the growth of the renewable energy industry and the environmental benefits that come with replacing fossil-fuels.[6]

IE examines societal issues and their relationship with both technical systems and the environment. Through this holistic view , IE recognizes that solving problems must involve understanding the connections that exist between these systems, various aspects cannot be viewed in isolation. Often changes in one part of the overall system can propagate and cause changes in another part. Thus, you can only understand a problem if you look at its parts in relation to the whole. Based on this framework, IE looks at environmental issues with a systems thinking approach.

Take a city for instance. A city can be divided into commercial areas, residential areas, offices, services, infrastructures, etc. These are all sub-systems of the 'big city’ system. Problems can emerge in one sub-system, but the solution has to be global. Let’s say the price of housing is rising dramatically because there is too high a demand for housing. One solution would be to build new houses, but this will lead to more people living in the city, leading to the need of more infrastructure like roads, schools, more supermarkets, etc. This system is a simplified interpretation of reality whose behaviors can be ‘predicted’.

In many cases, the systems IE deals with are complex systems. Complexity makes it difficult to understand the behavior of the system and may lead to rebound effects. Due to unforeseen behavioral change of users or consumers, a measure taken to improve environmental performance does not lead to any improvement or may even worsen the situation. For instance, in big cities, traffic can become problematic. Let's imagine the government wants to reduce air pollution and makes a policy stating that only cars with an even license plate number can drive on Tuesdays and Thursdays. Odd license plate numbers can drive on Wednesdays and Fridays. Finally, the other days, both cars are allowed on the roads. The first effect could be that people buy a second car, with a specific demand for license plate numbers, so they can drive every day. The rebound effect is that, the days when all cars are allowed to drive, some inhabitants now use both cars (whereas they only had one car to use before the policy). The policy did obviously not lead to environmental improvement but even made air pollution worse.

Moreover, life cycle thinking is also a very important principle in industrial ecology. It implies that all environmental impacts caused by a product, system, or project during its life cycle are taken into account. In this context life cycle includes

The transport necessary between these stages is also taken into account as well as, if relevant, extra stages such as reuse, remanufacture, and recycle. Adopting a life cycle approach is essential to avoid shifting environmental impacts from one life cycle stage to another. This is commonly referred to as problem shifting. For instance, during the re-design of a product, one can choose to reduce its weight, thereby decreasing use of resources. However, it is possible that the lighter materials used in the new product will be more difficult to dispose of. The environmental impacts of the product gained during the extraction phase are shifted to the disposal phase. Overall environmental improvements are thus null.

A final and important principle of IE is its integrated approach or multidisciplinarity. IE takes into account three different disciplines: social sciences (including economics), technical sciences and environmental sciences. The challenge is to merge them into a single approach.

The discipline of industrial ecology is to a large part based on the implicit assumption that if “we just get our technologies right”, the problems of environmental pollution and unsustainability will be solved. This is the reason why most current research in industrial ecology is focused on technological innovation (i.e., the T in the IPAT equation), such as improvements in eco-efficiency, design for environment, material flow analysis, etc. This simplistic view has been recently questioned by Huesemann and Huesemann[7] who demonstrate that negative unintended consequences of technology are inherently unpredictable and unavoidable, that most current techno-optimism reflected in industrial ecology is unjustified, and that modern technology, in the presence of continued economic growth, does not promote sustainability, but hastens collapse. Therefore, more than technological tinkering is needed to achieve long-term sustainability. Most importantly, the problem of human overpopulation must be addressed immediately and a transition to a steady state economy is needed to guarantee environmental and societal sustainability.

The ecosystem metaphor popularized by Frosch and Gallopoulos[2] has been a valuable creative tool for helping researchers look for novel solutions to difficult problems. Recently, it has been pointed out that this metaphor is based largely on a model of classical ecology, and that advancements in understanding ecology based on complexity science have been made by researchers such as C. S. Holling, James J. Kay,[8] and others.[9] For industrial ecology, this may mean a shift from a more mechanistic view of systems, to one where sustainability is viewed as an emergent property of a complex system.[10][11] To explore this further, several researchers are working with agent based modeling techniques .[12][13]

Exergy analysis is performed in the field of industrial ecology to use energy more efficiently.[14] The term exergy was coined by Zoran Rant in 1956, but the concept was developed by J. Willard Gibbs. In recent decades, utilization of exergy has spread outside of physics and engineering to the fields of industrial ecology, ecological economics, systems ecology, and energetics.