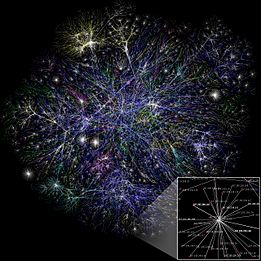 A visualization of the various routes through a portion of the Internet.

During the information age, the phenomenon is that the digital industry creates a knowledge-based society surrounded by a high-tech global economy that spans over its influence on how the manufacturing throughput and the service sector operate in an efficient and convenient way. In a commercialized society, the information industry is able to allow individuals to explore their personalized needs, therefore simplifying the procedure of making decisions for transactions and significantly lowering costs for both the producers and buyers. This is accepted overwhelmingly by participants throughout the entire economic activities for efficacy purposes, and new economic incentives would then be indigenously encouraged, such as the knowledge economy.[3]

The Information Age formed by capitalizing on computer microminiaturization advances.[4] This evolution of technology in daily life and social organization has led to the fact that the modernization of information and communication processes has become the driving force of social evolution.[2]

The Internet was conceived as a fail-proof network that could connect computers together and be resistant to any single point of failure. It is said that the Internet cannot be totally destroyed in one event, and if large areas are disabled, the information is easily rerouted. It was created mainly by DARPA on work carried out by British scientists like Donald Davies; its initial software applications were e-mail and computer file transfer.

Though the Internet itself has existed since 1969, it was with the invention of the World Wide Web in 1989 by British scientist Tim Berners-Lee and its introduction in 1991 that the Internet became an easily accessible network. The Internet is now a global platform for accelerating the flow of information and is pushing many, if not most, older forms of media into obsolescence.

Library expansion was calculated in 1945 by Fremont Rider to double in capacity every 16 years, if sufficient space were made available.[5] He advocated replacing bulky, decaying printed works with miniaturized microform analog photographs, which could be duplicated on-demand for library patrons or other institutions. He did not foresee the digital technology that would follow decades later to replace analog microform with digital imaging, storage, and transmission mediums. Automated, potentially lossless digital technologies allowed vast increases in the rapidity of information growth. Moore's law, which was formulated around 1965, calculated that the number of transistors in a dense integrated circuit doubles approximately every two years.[6]

The proliferation of the smaller and less expensive personal computers and improvements in computing power by the early 1980s resulted in a sudden access to and ability to share and store information for increasing numbers of workers. Connectivity between computers within companies led to the ability of workers at different levels to access greater amounts of information.

Eventually, Information and Communication Technology—computers, computerized machinery, fiber optics, communication satellites, Internet, and other ICT tools—became a significant part of the economy. Microcomputers were developed and many businesses and industries were greatly changed by ICT.[citation needed]

Nicholas Negroponte captured the essence of these changes in his 1995 book, Being Digital.[8] His book discusses similarities and differences between products made of atoms and products made of bits. In essence, a copy of a product made of bits can be made cheaply and quickly, and shipped across the country or internationally quickly and at very low cost.

Impact on jobs and income distribution

The Information Age has affected the workforce in several ways. It has created a situation in which workers who perform tasks which are easily automated are being forced to find work which involves tasks that are not easily automated.[9] Workers are also being forced to compete in a global job market. Lastly, workers are being replaced by computers that can do their jobs faster and more effectively. This poses problems for workers in industrial societies, which are still to be solved. However, solutions that involve lowering the working time are usually highly resisted.[citation needed]

Jobs traditionally associated with the middle class (assembly line workers, data processors, foremen and supervisors) are beginning to disappear, either through outsourcing or automation. Individuals who lose their jobs must either move up, joining a group of "mind workers" (engineers, doctors, attorneys, teachers, scientists, professors, executives, journalists, consultants), or settle for low-skill, low-wage service jobs.

The "mind workers" are able to compete successfully in the world market and receive high wages. Conversely, production workers and service workers in industrialized nations are unable to compete with workers in developing countries and either lose their jobs through outsourcing or are forced to accept wage cuts.[10] In addition, the internet makes it possible for workers in developing countries to provide in-person services and compete directly with their counterparts in other nations.

This has had several major consequences, including increased opportunity in developing countries and the globalization of the workforce.

In the past, the economic fate of workers was tied to the fate of national economies. For example, workers in the United States were once well paid in comparison to the workers in other countries. With the advent of the Information Age and improvements in communication, this is no longer the case. Because workers are forced to compete in a global job market, wages are less dependent on the success or failure of individual economies.[10]

The Information Age has affected the workforce in that automation and computerization have resulted in higher productivity coupled with net job loss. In the United States for example, from January 1972 to August 2010, the number of people employed in manufacturing jobs fell from 17,500,000 to 11,500,000 while manufacturing value rose 270%.[12]

Data has shown that overall, technology creates more jobs than it destroys even in the short run.[14]

Industry is becoming more information-intensive and less labor and capital-intensive (see Information industry). This trend has important implications for the workforce; workers are becoming increasingly productive as the value of their labor decreases. However, there are also important implications for capitalism itself; not only is the value of labor decreased, the value of capital is also diminished. In the classical model, investments in human capital and financial capital are important predictors of the performance of a new venture.[15] However, as demonstrated by Mark Zuckerberg and Facebook, it now seems possible for a group of relatively inexperienced people with limited capital to succeed on a large scale.[16]

The Information Age was enabled by technology developed in the Digital Revolution, which was itself enabled by building on the developments in the Technological Revolution.

Before the advent of electronics, mechanical computers, like the Analytical Engine in 1837, were designed to provide routine mathematical calculation and simple decision-making capabilities. Military needs during World War II drove development of the first electronic computers, based on vacuum tubes, including the Z3, the Atanasoff–Berry Computer, Colossus computer, and ENIAC.

The invention of the transistor in 1947 enabled the era of mainframe computers (1950s – 1970s), typified by the IBM 360. These large room-sized computers provided data calculation and manipulation that was much faster than humanly possible, but were expensive to buy and maintain, so were initially limited to a few scientific institutions, large corporations and government agencies. As transistor technology rapidly improved, the ratio of computing power to size increased dramatically, giving direct access to computers to ever smaller groups of people.

Along with electronic arcade machines and home video game consoles in the 1980s, the development of the personal computers like the Commodore PET and Apple II (both in 1977) gave individuals access to the computer. But data sharing between individual computers was either non-existent or largely manual, at first using punched cards and magnetic tape, and later floppy disks.

The first developments for storing data were initially based on photographs, starting with microphotography in 1851 and then microform in the 1920s, with the ability to store documents on film, making them much more compact. In the 1970s, electronic paper allowed digital information appear as paper documents.

Early information theory and Hamming codes were developed about 1950, but awaited technical innovations in data transmission and storage to be put to full use. While cables transmitting digital data connected computer terminals and peripherals to mainframes were common, and special message-sharing systems leading to email were first developed in the 1960s, independent computer-to-computer networking began with ARPANET in 1969. This expanded to become the Internet (coined in 1974), and then the World Wide Web in 1989.

Public digital data transmission first utilized existing phone lines using dial-up, starting in the 1950s, and this was the mainstay of the Internet until broadband in the 2000s. The introduction of wireless networking in the 1990s combined with the proliferation of communications satellites in the 2000s allowed for public digital transmission without the need for cables. This technology led to digital television, GPS, and satellite radio through the 1990s and 2000s.

Computers continued to become smaller and more powerful, to the point where they could be carried. In the 1980s and 1990s, laptops first allowed computers to become portable, and PDAs allowed use while standing or walking. Pagers existing since the 1950s, were largely replaced by mobile phones beginning in the 1980s, giving mobile networking ability to a few at first. These have now become commonplace, and include digital cameras. Starting in the 1990s, tablets and then smartphones combined and extended these abilities of computing, mobility, and information sharing.