Information geometry reached maturity through the work of Shun'ichi Amari and other Japanese mathematicians in the 1980s. Amari and Nagaoka's book, Methods of Information Geometry,[1] is cited by most works of the relatively young field due to its broad coverage of significant developments attained using the methods of information geometry up to the year 2000. Many of these developments were previously only available in Japanese-language publications.

The following introduction is based on Methods of Information Geometry.[1]

Define an n-set to be a set V with cardinality

. To choose an element v (value, state, point, outcome) from an n-set V, one needs to specify

b-sets (default b=2), if one disregards all but the cardinality. That is,

nats of information are required to specify v; equivalently,

By considering the occurrences

, one has an alternate way to refer to

. First, one chooses an occurrence

, which requires information of

bits. To specify v, one subtracts the excess information used to choose one

from all those linked to

is the number of

bits to choose one of them. So the information (variable size, code length, number of bits) needed to refer to

, considering its occurrences in a message is

. The averaged code length over all values is

is called the entropy of a random variable

With a probability distribution

one looks at a variable

through an observation context like a message or an experimental setup.

The context can often be identified by a set of parameters through combinatorial reasoning. The parameters can have an arbitrary number of dimensions and can be very local or less so, as long as the context given by a certain

produces every value of

does not change as function of

determines one probability distribution for

. Basically all distributions for which there exists an explicit analytical formula fall into this category (Binomial, Normal, Poisson, ...). The parameters in these cases have a concrete meaning in the underlying setup, which is a statistical model for the context of

The parameters are quite different in nature from

itself, because they do not describe

, but the observation context for

A parameterization of the form

, is called a mixture distribution, mixture or

. A parameterization with such a transformation rule is called flat.

A flat parameterization for

is an exponential or

parameterization, because the parameters are in the exponent of

. There are several important distributions, like Normal and Poisson, that fall into this category. These distributions are collectively referred to as exponential family or

-manifold for such distributions is not affine, but the

manifold is. This is called

another parameter and extend

In information geometry, the methods of differential geometry are applied to describe the space of probability distributions for one variable

. This is done by using a coordinate or atlas

must be a differentiable and invertible function of

are coordinates of the

-space, and the latter is a differential manifold

Derivatives are defined as is usual for a differentiable manifold:

a real-valued function on

, one may "geometrize" it by taking it to define a new manifold. This is done by defining coordinate functions on this new manifold as

In this way one "geometricizes" a function

, by encoding it into the coordinates used to describe the system.

and the resulting manifold of

points is called the

manifold itself is called the

-representations, in the sense used here, does not refer to the parameterization families of the distribution.

In standard differential geometry, the tangent space on a manifold

In ordinary differential geometry, there is no canonical coordinate system on the manifold; thus, typically, all discussion must be with regard to an atlas, that is, with regard to functions on the manifold. As a result, tangent spaces and vectors are defined as operators acting on this space of functions. So, for example, in ordinary differential geometry, the basis vectors of the tangent space are the operators

However, with probability distributions

, one can calculate value-wise. So it is possible to express a tangent space vector directly as

-representation ), and not as operators.

are coded by a parameter

with the important values

Distributions that allow a flat parameterization

-family ) of distributions and the according manifold is called

as a linear, symmetric and positive definite map

This allows a Riemannian metric to be defined; the resulting manifold is a Riemannian manifold. All of the usual concepts of ordinary differential geometry carry over, including the norm

, and the cotangent space

that is, the dual space to the tangent space

. From these, one may construct tensors, as usual.

For probability manifolds such an inner product is given by the Fisher information metric.

Here are equivalent formulas of the Fisher information metric.

This relation with a divergence

will be revisited further down.

The Fisher metric is motivated by

Like commonly done on Riemann manifolds, one may define an affine connection (or covariant derivative)

lying in the tangent bundle

describes how to differentiate the vector field

. It is itself a vector field; it is the sum of the infinitesimal change in the vector field

, as one moves along the direction

, plus the infinitessimal change of the vector

due to its parallel transport along the direction

. That is, it takes into account the changing nature of what it means to move a coordinate system in a "parallel" fashion, as one moves about in the manifold. In terms of the basis vectors

, one has the components:

are Christoffel symbols. The affine connection may be used for defining curvature and torsion, like is usual in Riemannian geometry.

A non-metric connection is not determined by a metric tensor

; instead, it is and restricted by the requirement that the parallel transport

must be a linear combination of the base vectors in

expresses the parallel transport of

as linear combination of the base vectors in

minus the change. Note that it is not a tensor (does not transform as a tensor).

For such a metric, one can construct a dual connection

-families the affine connection is called the

-connection and can also be expressed in more ways.

with respect to the Fisher metric.

A function of two distributions (points)

is applied only to the first parameter, and

only to the second.

, which we can define to be a metric

The absolute derivative of

. This metric and the connections relate to the Taylor series expansion

is called the divergence or contrast function. A good choice is

. From Jensen's inequality it follows that

-families. In the above,

is the Fisher metric. For

The Hellinger distance applicable to the

also evaluates to the Fisher metric.

. The corresponding tangent space basis vectors will be denoted by

to the dual base vectors. This defines an affine connection

constant for parallel transport of

is flat, then there exists a coordinate system

, that does not change over

. In order to keep

must not change either, i.e.

is also flat. Furthermore, in this case, we can choose coordinate systems such that

results as a function

. The connections are such, though, that

flat. This dual space is denoted as

This naturally leads to the following definition of a canonical divergence:

metric (Fisher metric) with the dual connections this is the relative entropy. For the self-dual Euclidean space

Similar to the Euclidean space the following holds:

For an autoparallel sub-manifold parallel transport in it can be expressed with the sub-manifold's base vectors, i.e.

Canonical divergence for the exponential family

For the exponential family

on both sides yields

is the covariance of

, the Cramér–Rao bound, i.e. an efficient estimator must be exponential.

The canonical divergence is given by the Kullback-Leibler divergence

and the triangulation is

this corresponds to the maximum entropy principle. 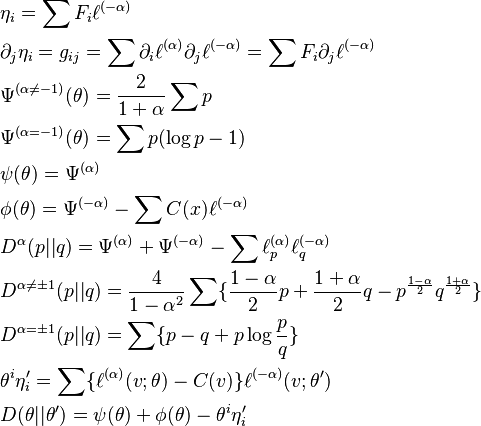 The connection induced by the divergence is not flat unless

. Then the Pythagorean theorem for two curves intersecting orthogonally at

The history of information geometry is associated with the discoveries of at least the following people, and many others

Information geometry can be applied where parametrized distributions play a role.