Inglehart–Welzel cultural map of the world 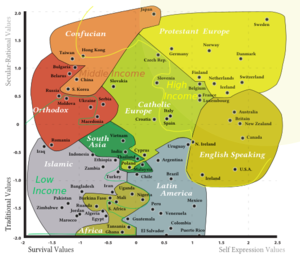 The Inglehart–Welzel cultural map of the world is a map, or more precisely, a scatter plot created by political scientists Ronald Inglehart and Christian Welzel based on the World Values Survey. It depicts closely linked cultural values that vary between societies in two predominant dimensions: traditional versus secular-rational values on the vertical y-axis and survival versus self-expression values on the horizontal x-axis. Moving upward on this map reflects the shift from traditional values to secular-rational ones and moving rightward reflects the shift from survival values to self-expression values.

According to the authors: "These two dimensions explain more than 70 percent of the cross-national variance in a factor analysis of ten indicators—and each of these dimensions is strongly correlated with scores of other important orientations."[1]

The authors stress that socio-economic status is not the sole factor determining a country's location, as their religious and cultural historical heritage is also an important factor.[2]

Analysis of the World Values Survey data by Inglehart and Welzel asserts that there are two major dimensions of cross-cultural variation in the world:

The map is not a geographical map but rather a chart in which countries are positioned based on their scores for the two values mapped on the x-axis (survival values versus self-expression values) and the y-axis (traditional values versus secular-rational values).[1] The map shows where societies are located in these two dimensions. Clusters of countries reflect their shared values and not geographical closeness.[1]

Secular-rational values have the opposite preferences to the traditional values. Societies that embrace these values place less emphasis on religion, traditional family values and authority. Divorce, abortion, euthanasia and suicide are seen as relatively acceptable.[1]

The shift from traditional to secular-rational values has been described by Engelbrekt and Nygren as "essentially the replacement of religion and superstition with science and bureaucracy".[2]

Survival values place emphasis on economic and physical security.[1] They are linked with a relatively ethnocentric outlook and low levels of trust and tolerance.

Self-expression values give high priority to subjective well-being, self-expression and quality of life.[1] Some values more common in societies that embrace these values include environmental protection, growing tolerance of foreigners, gays and lesbians and gender equality, rising demands for participation in decision-making in economic and political life (autonomy and freedom from central authority), interpersonal trust, political moderation, and a shift in child-rearing values from emphasis on hard work toward imagination and tolerance.[1]

Another proposed way to cluster the societies is by wealth, with the poor societies at the bottom of both axes, and rich at the top.[5]

Out of Western world countries, the United States is among the most conservative (as one of the most downwards-located countries), together with highly conservative Catholic countries such as Ireland and Poland.[6] Simoni concludes that "On the traditional/secular dimension, the United States ranks far below other rich societies, with levels of religiosity and national pride comparable with those found in some developing societies" (roughly, between Iran and Iraq).[3]

Russia is among the most survival-value oriented countries, and at the other end, Sweden ranks highest on the self-expression chart.[2]