From Infogalactic: the planetary knowledge core
Jump to: navigation, search
This article is about the popular or citizens' initiative. For other uses, see Initiative (disambiguation).
"Popular initiative" redirects here. For the instrument that allow people to suggest laws in Switzerland, see Popular initiative (Switzerland). 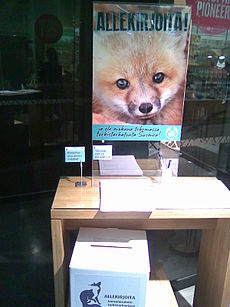 Signature collection point at The Body Shop in Kluuvi shopping centre, Helsinki, for one of the first citizens’ initiatives in Finland, about banning fur farming.

In political science, an initiative (also known as a popular or citizens' initiative) is a means by which a petition signed by a certain minimum number of registered voters can force a public vote (plebiscite).

The vote may be on a proposed statute, constitutional amendment, charter amendment or local ordinance, or to simply oblige the executive or legislature to consider the subject by submitting it to the order of the day. It is a form of direct democracy.

The Canadian province of British Columbia has a citizen initiative law known as the Recall and Initiative Act.[1] The original proposal was put to voters in a referendum held in October 1991 and was supported by over 83% of voters. It was subsequently put into force by the incoming NDP government. Since it came into force in 1995, several attempts have been made to hold an initiative, but until the fall of 2010, none had succeeded in reaching the first of the thresholds – namely, securing signatures of 10% of registered voters in each riding throughout British Columbia. The first referendum was held under this legislation on September 2011 on the subject of repealing the Harmonized Sales Tax. Details of its use in BC are available on the Elections BC website.[2]

The rejected Treaty establishing a Constitution for Europe (TCE) included a limited indirect initiative right (Article I-46(4)). The proposal of introducing the European Citizens' Initiative (ECI) was that 1,000,000 citizens, from minimal numbers of different member states, could invite the executive body of the European Union (EU), the European Commission, to consider any proposal "on matters where citizens consider that a legal act of the Union is required for the purpose of implementing the Constitution." The precise mechanism had not been agreed upon. Critics underlined the weakness of this right of initiative, which did not ultimately entail any vote or referendum.

A similar scheme under the same name, European Citizens' Initiative (ECI), has been put forward in the now ratified European Lisbon Treaty (which entered into force on 1 December 2009), enabling a limited indirect initiative right.[3] It follows very similar rules to the ones outlined in the European Constitution, requiring the signatures of 1,000 000 European Nationals. These citizens would thereby obtain the same right to request the Commission to submit a legislative proposal as the Council has had since the establishment of the European Communities in 1957.[4] This, however, does require that the signatures come from a "significant number" of Member States. It is suggested that this significant number will need to be around a quarter of member states, with at least 1/500 of the citizens in those member states supporting the initiative. With the variety of languages within the European Union, this creates a significant hurdle for people to navigate. The treaty also makes it clear that right of initiative should not be confused with the right to petition, particularly since a petition is directed to Parliament[5] while a citizens' initiative is directed to the Commission; whereas a petition is a method of remonstrance, usually focussing on perceived infringements of European Law, an initiative is a grassroots proposal for new legislation. In 2013 the subjects of ongoing open initiatives of the European Citizens' Initiative are e.g. about "water and sanitation as a human right" (against Water privatization), “30 km/h - making the streets liveable!" (Traffic calming in towns), "Unconditional Basic Income" (UBI - Exploring a pathway towards emancipatory welfare conditions), or to "End Ecocide in Europe" (to give the Earth Rights).[6]

It remains to be seen if the ECI evolves into a full initiative or remains in its present state of a de facto petition.[7][8]

Since March 1, 2012, groups of at least 50,000 Finnish citizens with suffrage have had the constitutional right to send a citizens' initiative (Finnish: kansalaisaloite, Swedish: medborgarinitiativ) to the Parliament of Finland.[9][10]

A limited, indirect form of local initiative was added to the French Constitution (article 72-1, référendum d'initiative locale) on 28 March 2003 as part of decentralization reforms. However, the only power these "local referendum initiatives" confer on citizens is the ability to add propositions to their local assembly's meeting agenda. The decision as to whether to submit citizen propositions to a popular vote (referendum) rests with the local assembly.

All German states have the right to initiative.[citation needed] However, there is no constitutional citizens' initiative in Germany at a federal level.

Provision for the initiative was included in the 1922 constitution of the Irish Free State but was hastily eliminated when republicans organised a drive to instigate a vote that would abolish the Oath of Allegiance, which was nevertheless later abolished by the government. The current 1937 constitution has no initiative.

The 2012—2014 Constitutional Convention recommended by a margin 83% that "'direct democracy' (i.e. citizens’ initiatives) with adequate safeguards be introduced" to the Constitution of Ireland.

In New Zealand a vote initiated by the public is called a citizen initiated referendum. These are non-binding referendums on any issue in which proponents have submitted a petition to Parliament signed by ten percent of all registered electors within 12 months.

People's initiative to propose amendments to the constitution is enshrined in the 1987 Philippine Constitution under Article XVII Section 2, which states:

This provision is further protected by Republic Act 6735 or The Initiative and Referendum Act.[11] The law defines initiative as:

The law also provides indirect initiative defining the exercise of people's initiative through a proposition sent to congress or local legislative body for action.

The federal popular initiative was included in the Swiss Federal Constitution in 1891, permitting a certain number of citizens (currently 100,000 signatures within 18 months[12]) to make a request to amend a constitutional article, or even to introduce a new article into the constitution. The right of initiative is also used at the cantonal and communal level in Switzerland (all cantons, all communes where the direct democratic citizens' participation originates); many cantons allow initiatives to enact regular non-constitutional law, but the federal system does not.

If the necessary number of supporters is reached, the initiative will be put to a plebiscite about two or three years later; the delay helps prevent short-term political moods from getting into the constitution. The parliament and government will both issue their official opinions on whether they recommend voting for or against the proposed amendment, and these opinions will be published.

The parliament may also pass an alternative amendment suggestion which will also be included on the ballot; in this case, the voters cast two votes, one for whether or not they want an amendment, and one for which one they want, the original one from the initiative or the one introduced in parliament, in case a majority decides for amending.

A citizen-proposed change to the constitution in Switzerland at the national level needs to achieve both a majority of the national popular vote and a majority of the canton-wide vote to pass. The vast majority of national initiatives introduced since 1891, when the system started, have failed to receive voter support. But the initiatives have proven to be a useful tool to force the government to concentrate on subjects that will otherwise remain hidden from the politic, lowering the distance between the government and the citizens.

Main article: Initiatives and referendums in the United States

In the United States, a popular vote on a measure is referred to as a referendum only when originating with the legislature. An initiative may be called a "ballot measure", "initiative measure", or "proposition".[citation needed]

The United States has no initiative process at the national level, but the initiative is in use at the level of state government in 24 states and the District of Columbia,[13] and is also in common use at the local government level.

Article I, Section I of the United States Constitution vests "all legislative powers herein granted" to the Congress of the United States." Establishing a national initiative procedure would likely require an amendment to the Constitution, which would under Article V require two-thirds of both houses of Congress or the application of two-thirds of the state legislatures to propose, and three-fourths of all state legislatures (or conventions in three-fourths of the states) to ratify. The Constitution itself was not ratified by referendum, but pursuant to Article VII was instead ratified by state conventions elected by the people.

Several proposals have been made to institute a national referendum. The Ludlow Amendment, introduced several times to the House of Representatives by Louis Ludlow of Indiana between 1935 and 1940 during an era of heightened isolationist tendencies, proposed an amendment to the Constitution that would require a national referendum to declare war, except in the case of invasion and attack. The amendment came closest to overcoming a discharge petition on January 10, 1938, when it was defeated in the House by a vote of 209 to 188, far short of the two-thirds vote required for its passage.

Unsuccessful attempts to get initiatives have nevertheless occurred, but since the proposals were bills, not a constitutional amendments, probably no initiative could have lawfully been voted on notwithstanding the bills' passage. The first attempt to get national ballot initiatives occurred in 1907 when House Joint Resolution 44 was introduced by Rep. Elmer Fulton of Oklahoma; the proposal was never put to a vote. In 1977, both the Abourezk-Hatfield National Voter Initiative and the Jagt Resolutions never got out of committee. Senator Mike Gravel was part of that effort.

The modern U.S. system of initiative and referendum originated in the state of South Dakota. South Dakota adopted initiative and referendum in 1898 by a vote of 23,816 to 16,483. Oregon was the second state to adopt and did so in 1902, when the state's legislators adopted it by an overwhelming majority. The "Oregon System", as it was at first known, subsequently spread to many other states, and became one of the signature reforms of the Progressive Era (1890s-1920s).