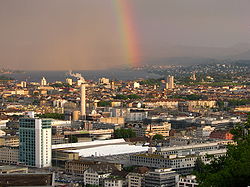 Inner city of Zürich and Lake Zurich as seen from Käferberg

The inner city is the central area of a major city or metropolis. Inner city areas tend to have higher population densities than outer suburbs, with more of the population living inside multi-floored townhouses and apartment buildings.

In the United States and United Kingdom, the term "inner city" is often used as a euphemism for lower-income residential districts in the city centre and nearby areas with, in the US, the additional connotation of impoverished black and/or Hispanic neighborhoods.[1] Sociologists sometimes turn this euphemism into a formal designation, applying the term "inner city" to such residential areas, rather than to geographically more central commercial districts. However, some inner city areas of American cities have undergone gentrification, especially since the 1990s.[2]

Such connotations are less common in other countries, where deprived areas may be located in outlying parts of cities. For instance, in many European and Brazilian cities, the inner city is the most prosperous part of the metropolis, where housing is expensive and where elites and high-income individuals dwell. Poverty and crime are more associated with the distant suburbs. The Italian, Spanish, Portuguese, French and Swedish words for suburb (sobborgo, suburbio, subúrbio, banlieue and förort respectively) often have a negative connotation similar to that of the English term "inner city", especially when used in the plural.

The American sociological usage is rooted in the middle 20th century. When automobiles became affordable in the United States and forced busing ensued, many middle and high-income residents, who were mostly white, moved to suburbs to have larger lots and houses, and a lower crime rate. The loss of population and affluent taxpayers caused many inner city communities to fall into urban decay. Late in the century, many such areas underwent gentrification, especially in the Northeast and West coast, depriving them of the "inner city" label despite their unchanged location.

In big cities in Brazil, for example, there are two kinds of inner cities: one equivalent to the American sense of inner city (generally built before 1900 and commonly called Centro Velho) and another, generally close to the former, following a European context: high-income (commonly built after 1900, with Haussmann influences. Notable exceptions are cities built in the 20th century, usually planned with modernist concepts, such as Brasília, Goiânia, Belo Horizonte, Campo Grande and Palmas, under the "personal car" culture. Nevertheless, since the 1990s, thousands of walled townhouses and condos are being built in and around poor suburbs for middle-to-high-income dwellers.