From Infogalactic: the planetary knowledge core
Jump to: navigation, search
Not to be confused with INCITE, InSight, or Insite.
For other uses, see Insight (disambiguation).

Insight is the understanding of a specific cause and effect in a specific context. The term insight can have several related meanings:

An insight that manifests itself suddenly, such as understanding how to solve a difficult problem, is sometimes called by the German word Aha-Erlebnis. The term was coined by the German psychologist and theoretical linguist Karl Bühler. It is also known as an epiphany.

Representation of the Duncker Candle Problem.[1]

In psychology, insight occurs when a solution to a problem presents itself quickly and without warning.[2] It is the sudden discovery of the correct solution following incorrect attempts based on trial and error.[3]

Insight was first studied by Gestalt Psychology, in the early part of the 20th century, during the search for an alternative to associationism and the associationistic view of learning.[4] Some proposed potential mechanisms for insight include: suddenly seeing the problem in a new way, connecting the problem to another relevant problem/solution pair, releasing past experiences that are blocking the solution, or seeing problem in a larger, coherent context.[4] 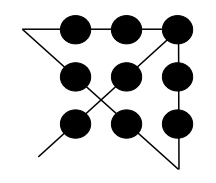 Solution to the Nine Dot problem.[5]

Generally, methodological approaches to the study of insight in the laboratory involve presenting participants with problems and puzzles that cannot be solved in a conventional or logical manner.[4] Problems of insight commonly fall into three types.[4]

Example of an RAT problem.

The first type of problem forces participants to use objects in a way they are not accustomed to (thus, breaking their functional fixedness), like the "Duncker candle problem".[4] In the "Duncker candle problem", individuals are given matches and a box of tacks and asked to find a way to attach a candle to the wall to light the room.[1] The solution requires the participants to empty the box of tacks, set the candle inside the box, tack the box to the wall, and light the candle with the matches.

The second type of insight problem requires spatial ability to solve, like the "Nine-dot Problem".[4] The famous "Nine-dot problem" requires participants to draw four lines, through nine dots, without picking their pencil up.[5]

The third and final type of problem requires verbal ability to solve, like the Remote Associates Test (RAT).[4] In the RAT, individuals must think of a word that connects three, seemingly unrelated, words.[6] RAT are often used in experiments, because they can be solved both with and without insight.[7]

People in a better mood are more likely to solve problems by insight.[9] Research demonstrated that self-reported positive affect of participants uniquely increased insight before and during the solving of a problem,[10] as indicated by differing brain activity patterns.[9] People experiencing anxiety showed the opposite effect, and solved fewer problems by insight.[9]

It was found that groups typically perform better on insight problems (in the form of rebus puzzles with either helpful or unhelpful clues) than individuals.[14]

Recently, insight was studied in a non-laboratory setting.[17] Accounts of insight that have been reported in the media, such as in interviews, etc., were examined and coded. It was found that insights that occur in the field are typically reported to be associated with a sudden "change in understanding" and with "seeing connections and contradictions" in the problem.[17] It was also found that insight in nature differed from insight in the laboratory. For example, insight in nature was often rather gradual, not sudden, and incubation was not as important.[17]

Studies on primate cognition have provided evidence of what may be interpreted as insight in animals. In 1917, Wolfgang Köhler published his book The Mentality of Apes, having studied primates on the island of Tenerife for six years. In one of his experiments, apes were presented with an insight problem that required the use of objects in new and original ways, in order to win a prize (usually, some kind of food). He observed that the animals would continuously fail to get the food, and this process occurred for quite some time; however, rather suddenly, they would purposefully use the object in the way needed to get the food, as if the realization had occurred out of nowhere. He interpreted this behavior as something resembling insight in apes.[18]

There are a number of theories representing insight; at present, no one theory dominates interpretation.[4]

According to the dual process theory, there are two systems used to solve problems.[15] The first involves logical and analytical thought processes based on reason, while the second involves intuitive and automatic processes based on experience.[15] Research has demonstrated that insight probably involves both processes; however, the second process is more influential.[15]

According to the three-process theory, intelligence plays a large role in insight.[19] Specifically, insight involves three different processes (selective encoding, combination, and comparison), which require intelligence to apply to problems.[19] Selective encoding is the process of focusing attention on ideas relevant to a solution, while ignoring features that are irrelevant.[19] Selective combination is the process of combining the information previously deemed relevant.[19] Finally, selective comparison is the use of past experience with problems and solutions that are applicable to the current problem and solution.[19]

According to the four-stage model of insight, there are four stages to problem solving.[20] First, the individual prepares to solve a problem.[20] Second, the individual incubates on the problem, which encompasses trial-and-error, etc.[20] Third, the insight occurs, and the solution is illuminated.[20] Finally, the verification of the solution to the problem is experienced.[20] Since this model was proposed, other similar models have been explored that contain two or three similar stages.[4]

In psychology and psychiatry, insight can mean the ability to recognize one's own mental illness.[21][22] This form of insight has multiple dimensions, such as recognizing the need for treatment, and recognizing consequences of one's behavior as stemming from an illness.[23] A person with very poor recognition or acknowledgment is referred to as having "poor insight" or "lack of insight". The most extreme form is anosognosia, the total absence of insight into one's own mental illness. Many mental illnesses are associated with varying levels of insight. For example, people with obsessive compulsive disorder and various phobias tend to have relatively good insight that they have a problem and that their thoughts and/or actions are unreasonable, yet are compelled to carry out the thoughts and actions regardless.[24] Patients with Alzheimer's disease, schizophrenia, and various psychotic conditions tend to have very poor awareness that anything is wrong with them.[25]

"Insight" can also refer to other matters in psychology; problem solving behavior requiring insight is the subject of insight phenomenology.

An insight is the derivation of a rule which links cause with effect. The mind is a model of the universe built up from insights.

Thoughts of the mind fall into two categories:

A mature mind has assimilated many insights and represents a sophisticated model of the universe. The mind-model might be inaccurate. When insight is not subordinate to a validation discipline like the 'scientific method', 'fallacious' thinking can result in a confused mind.

Intuition, which is often described in the popular literature as an alternative thought process, is merely another manifestation of insight.[26] In this process, multiple bits of seemingly unrelated data are linked together and a hypothesis or plan of action is generated. Usually this process is generated in a novel situation. Such a circumstance links data which had previously seemed unrelated.[27] The categories and analytical process, however, are not distinct from any other form of insight. The only difference is the degree of novelty of the stimulus.[citation needed]

Pat Conroy,[citation needed] points out that an insight is a statement based on a deep understanding of your target consumers' attitudes and beliefs, which connect at an emotional level with your consumer, provoking a clear response (This brand understands me! That is exactly how I feel! — even if they've never thought about it quite like that) which, when leveraged, has the power to change consumer behavior. Insights must effect a change in consumer behavior that benefits your brand, leading to the achievement of the marketing objective.[citation needed]

Insights can be based on:

Insights are most effective when they are/do one of the following:

In order to be actionable, as the expression of a consumer truth, an insight as to be stated as an articulated sentence, containing:[29]

The gap between the second and the third term offers a tension, which constitutes a potential for a brand. Like there are concept writers for copies, there are insight writers.

In technical terminology of insight in market research is the understanding of local market by referring different source of information (such as quantitative research and qualitative research) proving for the consumers' insight.