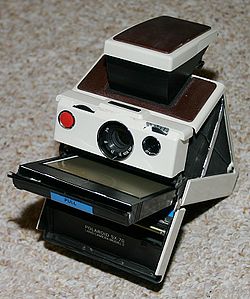 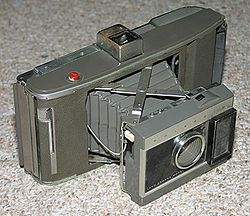 The instant camera is a type of camera which uses self-developing film to create a chemically developed print shortly after taking the picture. Polaroid Corporation pioneered (and patented) consumer friendly instant cameras and film, and were followed by various other manufacturers.

The invention of commercially viable instant cameras which were easy to use is generally credited to American scientist Edwin Land, who unveiled the first commercial instant camera, the model 95 Land Camera, in 1948, a year after unveiling instant film in New York City. The earliest instant camera, which consisted of a camera and portable wet darkroom in a single compartment, was invented in 1923 by Samuel Shlafrock.[1]

In February 2008, Polaroid filed for chapter 11 bankruptcy protection for the second time and announced it would discontinue production of its instant film and cameras, shut down three factories and lay off 450 workers.[2] Sales of chemical film by all makers have dropped by at least 25% per year in the first decade of the 21st century.In 2009, Polaroid was acquired by PLR IP Holdings, LLC which uses the Polaroid brand to market various products often relating to instant cameras. Among the products it markets are a Polaroid branded Fuji Instax instant camera, and various digital cameras and portable printers. As of 2014[update] film continues to be made by the Impossible Project for several models of Polaroid camera, and for the 8×10 inch format.[3]

Polaroid cameras can be classified by the type of film they use. The earliest Polaroids (pre-1963) used instant roll film. Roll film came in two rolls (positive/developing agent and negative) which were loaded into the camera and was eventually offered in three sizes (40, 30, and 20 series). The next generation of Polaroid cameras utilized 100 series "pack film," which required the photographer to pull the film out of the camera for development, then peel apart the positive from the negative at the end of the developing process. Pack film initially was offered in a rectangular format (100 series), then in square format (80 series). Third generation Polaroids, like the once popular SX-70, used a square format integral film, in which all components of the film (negative, developer, fixer, etc.) were contained. Each exposure developed automatically once the shot was taken. SX-70 (or Time Zero) film had a strong following from artists who used it for image manipulation.

600 series cameras such as the Pronto, Sun 600, and One600 used 600 (or the more difficult to find professional 779) film which was four times faster than SX-70 film. Polaroid Spectra cameras used Polaroid Spectra film which went back to a rectangular format. Captiva, Joycam, and Popshots (single use) cameras used a smaller 500 series film in rectangular format. I-zone cameras use a very small film format which was offered in a sticker format. Finally, Mio cameras used Polaroid Mio film which was Fuji Instax mini, branded as Polaroid and which is still available in 2015 as Fuji Instax Mini. This size produces a billfold sized photo. Polaroid still markets a mini format camera built by Fuji branded as Polaroid 300 and the film is available with both the Polaroid name and as Fuji Instax mini which are interchangeable.

Polaroid also invented and manufactured an instant movie camera system was called Polavision. The kit included a camera, film, and a movie viewer. When the movie was shot, it would be taken out of the camera and then inserted into the viewer for development, then viewed after development. This format was close to Super 8 mm film. Polavision film was different from normal film in that it was an additive film, mixing the primary colors (red, green, blue) to form the color image. The biggest disadvantage of the Polavision system was the low film speed (ASA 40), which resulted in having to use very bright lights when taking the movie, as well as requiring a special player to view the developed movie. It also lacked audio capability. Because of this, and combined with the advent of VHS video recorders, Polavision had a short history. 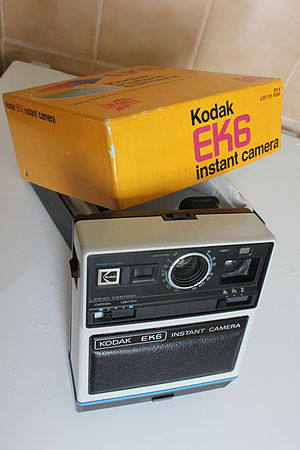 After Land's instant camera invention was brought to market in 1948, a few different instant cameras were developed, some using Polaroid-compatible film such as cameras by Keystone, Konica, and Minolta. Others were incompatible with Polaroid cameras and film, the most notable of these being made by Kodak, such as the EK series and Kodamatic cameras. These cameras accepted a Kodak developed integral instant film, similar to Polaroid's SX-70 film. Kodak instant film was chemically similar to Polaroid with the exception that the negative was exposed from the rear and the dye/developers diffused to the front of the photogragh. This alleviated the need for a mirror to reverse the image before it struck the negative.

Even so, Polaroid brought a patent-infringement lawsuit against Kodak, and eventually Kodak was forced to stop manufacture of both the camera and film. [4] Kodak was also left to pay a settlement to customers who were left without a way to use their now defunct cameras. One settlement offered owners of Kodak instant cameras a credit towards a new Kodak camera. Many Kodak instant cameras still exist and can be found on auction sites. Kodak also lost the contract to manufacture Polaroid's negatives which subsequently took production in house. 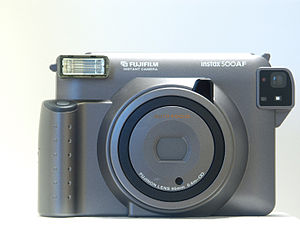 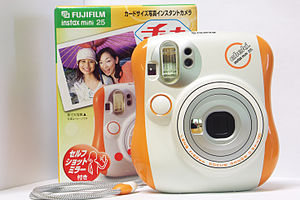 In more recent years, Fujifilm has introduced a line of instant cameras and film in Japanese and Asian markets. Fujifilm called their instant camera line Fotorama. Starting in the early 1980s the F series of cameras include the F-10, F-50S and F-62AF. The mid '80s introduced the 800 series with models such as the MX800, 850E, and Mr Handy collapsible. The ACE cameras were introduced in the mid-1990s and film identical to the 800 film but with different cartridge. The integral films are based on the Kodak line of instant camera films. The instant films FI-10/PI-800/ACE series are somewhat compatible with Kodak line of instant cameras, with minor modifications to the cartridge to make it fit. The F series film was discontinued in 1994 but similar modifications on other Fujifilm cartridge box can be made. In the late 1990s Fujifilm introduced a new series of cameras using a new film called Instax it was available in markets outside the US. Instax became available in smaller mini size with the introduction of the Instax mini/Cheki line. The Polaroid's Mio was available in the US, it uses the same film as the Fujifilm Instax Mini series but were rebranded as Mio film. None of Fujifilm's products were sold officially in the United States, although the Polaroid-compatible film is available through some larger photographic suppliers. With the announcement in 2008 of Polaroid ceasing film production, the Fuji Instax and peel apart type films are slowly becoming available in more channels.

Instant cameras have found many uses throughout their history. The original purpose of instant cameras was motivated by Jennifer Land's question to her father (Edwin Land): "Why can't I see them now?" Many people have enjoyed seeing their photos shortly after taking them, allowing them to recompose or retake the photo if they didn't get it right. But instant cameras were found to be useful for other purposes such as ID cards, passport photos, ultrasound photos, and other uses which required an instant photo. They were also used by police officers and fire investigators because of their ability to create an unalterable instant photo. Medium and large format professional photographers have also used the higher end instant cameras to preview lighting before taking the more expensive medium and/or large format photo. Instant film also has been used in ways that are similar to folk art, including the transfer of the images/emulsion and image manipulation.

Script supervisors in film production used instant cameras as standard to aid visual continuity by photographing characters or sets, producing photographs that could be instantly referred to when a particular set or character's appearance needs to be reset and shot again, or recalled later due to the non linear shooting schedule of a film or television production (that is, a film is rarely shot in the order of chronology in the film, due to time, location or financial restraints). Script supervisors no longer use instant cameras due to digital technology.

With the advent of digital photography, much of the instant camera's consumer appeal has been transferred to digital cameras. Passport photo cameras have gone to digital, leaving instant cameras to a niche market.

Edwin Land's original idea behind instant photography was to create a photographic system that was seamless and easy for anyone to use. The first roll film cameras required the photographer to use a light meter to take a reading of the light level, then to set the exposure setting on the lens. Then the lens was focused and the subject framed and the picture was taken. The photographer flipped a switch and pulled the large tab in the back of the camera to pull the negative over the positive, through some rollers to spread the developing agent. After the picture developed inside the camera for the required time, the photographer opened the small door in the camera back and peeled the positive from the negative. To prevent fading, the black and white positive had to be coated with a fixing agent, a potentially messy procedure which led to the development of coaterless instant pack film.

Pack film cameras were mostly equipped with automatic exposure, but still had to be focused and a flash bulb or cube unit needed to be used with colour film indoors. The development of the film required the photographer pull two tabs, the second tab which pulled the positive/negative "sandwich" from the camera, where it developed outside the camera. If the temperature was below 60°F, the positive/negative "sandwich" was placed between two aluminum plates and placed either in the user's pocket or under their arm to keep it warm while developing. After the required development time (15 seconds to 2 minutes), the positive (with the latent image) was peeled apart from the negative.

Integral film cameras, such as the SX-70, 600 series, Spectra, and Captiva cameras went a long way in accomplishing Edwin Land's goal of creating a seamless process in producing instant photos. The photographer simply pointed the camera at the subject, framed it and took the photo. The camera and film did the rest, including adjusting the exposure settings, taking care of focusing (Sonar autofocus models only), utilising a flash if necessary (600 series and up), and ejecting the film, which developed without intervention from the photographer.