The Institute of National Remembrance – Commission for the Prosecution of Crimes against the Polish Nation (Polish: Instytut Pamięci Narodowej – Komisja Ścigania Zbrodni przeciwko Narodowi Polskiemu; IPN) is a Polish government-affiliated research institute with lustration prerogatives[2] and prosecution powers[3] founded by specific legislation.[2] It specialises in the legal and historical sciences and in particular the recent history of Poland.[4] IPN investigates both Nazi and Communist crimes committed in Poland between 1939 and 1989, documents its findings and disseminates the results of its investigations to the public.[4]

The Institute was established by the Polish Parliament on 18 December 1998.[3] The Institute started its activities on 1 July 2000.

According to a new law which went into effect on 15 March 2007, IPN was to be mandated to carry out lustration procedures prescribed by Polish law.[2] However, key articles of that law were judged unconstitutional by Poland's constitutional court on 11 May 2007, so the role of IPN in the lustration process is at present unclear.[5]

The IPN is a founding member organisation of the Platform of European Memory and Conscience.[6]

IPN's main areas of activity[4] and mission statement[3] include: 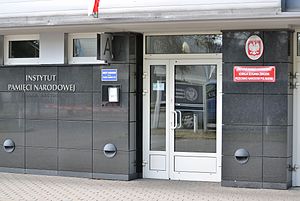 IPN was created by special legislation on 18 December 1998.[3] IPN is governed by the chairman. This chairman is chosen by a supermajority (60%) of the Polish Parliament (Sejm) with the approval of the Senate of Poland on a request by a Collegium of IPN. The chairman has a 5-year term of office. The first chairman of the IPN was Leon Kieres, elected by the Sejm for five years in 8 June 2000 (term 30 June 2000 – 29 December 2005). The second chairman was Janusz Kurtyka, elected on 9 December 2005 with a term that started 29 December 2005 until his death in the Smolensk airplane crash on 10 April 2010. Franciszek Gryciuk was acting chairman from 2010 to 2011, when the current chairman, Łukasz Kamiński, was elected by the Sejm.

On 29 April 2010, acting president Bronislaw Komorowski signed into law a parliamentary act that reformed the Institute of National Remembrance.[8] 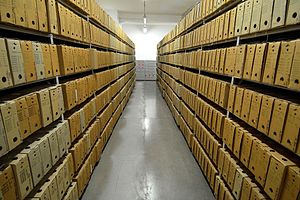 The research conducted by IPN from December 2000 falls into four main topical areas:

Among the most widely reported cases investigated by the IPN thus far is the Jedwabne Pogrom, a pogrom of Polish Jews "committed directly by Poles, but inspired by the Germans" in 1941. A selection of other cases include:

IPN is involved in dissemination of its research results in the form of publications (particularly the IPN Bulletin (Biuletyn IPN „pamięć.pl”) and "Remembrance and Justice" periodicals), exhibitions, seminars, panel discussions, film reviews, workshops and school lessons.[9] Since December 2000 IPN has organized over 30 academic conferences (particularly the Warsaw Congress of Science organized every year in September); 22 exhibitions in various museums and educational competitions involving thousands of students.[9] "IPN Bulletin" is of an informative and popular-scientific character and contains articles pertaining to the history of Poland in the years 1939–1990 as well as describes the current IPN activities.[9] "Remembrance and Justice" appears every half a year and is a scientific historical magazine.[9] IPN also publishes books which are usually edited as collections of documents, reports and memories, but also scientific elaborations (78 of such publications have appeared till April 2007).[9]

The Public Education Office co-operates on a permanent basis with the Ministry of National Education and Sport, having signed a Co-operation Agreement in 2001.[9] IPN gives opinions of curricula and textbooks on history that are used in Polish schools and is involved in teacher training activities.[9] The IPN also co-organizes postgraduate diploma studies on history at the Jagiellonian University and the University of Maria Curie-Skłodowska.[9]

For more details on this topic, see Lustration in Poland.

On 18 December 2006 Polish law regulating IPN was changed and came into effect on 15 March 2007. This change gave IPN new lustration powers.[19] However, key articles of that law were judged unconstitutional by Poland's Constitutional Court on 11 May 2007, making the role of IPN in lustration unclear and putting the whole process into question.[5]

One of the most controversial aspects of IPN is a by-product of its role in collecting and publishing previously secret archives from the Polish communist security apparatus, the Służba Bezpieczeństwa: revealing secret agents and collaborators (a process called lustration).[20] One incident which drew criticism involved the so-called Wildstein list; a partial list of names of people who allegedly worked for the communist era Polish intelligence service, which was copied from IPN archives (without IPN permission) in 2004 by journalist Bronisław Wildstein and published in the Internet in 2005. The list gained much attention in Polish media and politics, and during that time IPN security procedures and handling of the matter came under criticism.[21]

The election of a new IPN president in December 2005 was controversial. Janusz Kurtyka, the incumbent IPN president, was contested by Andrzej Przewoźnik. Przewoźnik's candidature received a severe setback after documents were found which suggested his possible co-operation with Służba Bezpieczeństwa, the Communist Poland's internal intelligence agency and secret police. Przewoźnik was cleared of the accusations only after he had lost the election.[22]

Przewoźnik and Kurtyka both died in the 2010 Polish Air Force Tu-154 crash.

IPN actions have also attracted support. In 2006 an open letter was published, declaring that:[23]

"History of Solidarity and anti-communist resistance in Poland cannot be damaged by scientific studies and resulting increase in our knowledge of the past. History of opposition to totalitarianism belongs to millions of Poles and not to one social or political group which usurps the right to decide which parts of national history should be discussed and which forgotten."