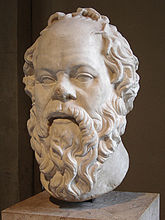 Intellectualism denotes the use, development, and exercise of the intellect; the practice of being an intellectual; and the Life of the Mind.[1][2] In the field of philosophy, “intellectualism” occasionally is synonymous with “rationalism”, that is, knowledge mostly derived from reason and ratiocination.[3][4] Socially, “intellectualism” negatively connotes: single-mindedness of purpose (“too much attention to thinking”) and emotional coldness (“the absence of affection and feeling”).[3][4][5]

In the view of Socrates (469–399 BC), intellectualism allows that “one will do what is right or best just as soon as one truly understands what is right or best”; that virtue is a purely intellectual matter, since virtue and knowledge are familial relatives, which a person accrues and improves with dedication to reason.[6] So defined, Socratic intellectualism became a key philosophic doctrine of Stoicism. The apparent, problematic consequences of this view are “Socratic paradoxes”, such as the view that there is no weakness of will — that no one knowingly does, or seeks to do, evil (moral wrong); that anyone who does, or seeks to do, moral wrong does so involuntarily; and that virtue is knowledge, that there are not many virtues, but that all virtues are one.

Contemporary philosophers dispute that Socrates’s conceptions of knowing truth, and of ethical conduct, can be equated with modern, post–Cartesian conceptions of knowledge and of rational intellectualism.[7] As such, Michel Foucault demonstrated, with detailed historical study, that in Classical Antiquity (800 BC – AD 1000), “knowing the truth” is akin to “spiritual knowledge”, in the contemporarily understanding of the concept. Hence, without exclusively concerning the rational intellect, spiritual knowledge is integral to the broader principle of “caring for the self”.

Typically, such care of the self-involved specific ascetic exercises meant to ensure that not only was knowledge of truth memorized, but learned, and then integrated to the self, in the course of transforming oneself into a good person. Therefore, to understand truth meant “intellectual knowledge” requiring one’s integration to the (universal) truth, and authentically living it in one’s speech, heart, and conduct. Achieving that difficult task required continual care of the self, but also meant being someone who embodies truth, and so can readily practice the Classical-era rhetorical device of parrhesia: “to speak candidly, and to ask forgiveness for so speaking”; and, by extension, practice the moral obligation to speak the truth for the common good, even at personal risk.[8] This ancient, Socratic moral philosophic perspective contradicts the contemporary understanding of truth and knowledge as rational undertakings.

In medieval philosophy, intellectualism is a doctrine of divine and human action, wherein the faculty of intellect precedes, and is superior to, the faculty of the will. As such, Intellectualism is contrasted with Voluntarism, which proposes the Will as superior to the intellect, and to the emotions; hence, the stance that “according to intellectualism, choices of the Will result from that which the intellect recognizes as good; the will, itself, is determined. For voluntarism, by contrast, it is the Will which identifies which objects are good, and the Will, itself, is indetermined”.[9] From that philosophic perspective and historical context, the Spanish Muslim polymath Averroës (1126–98) in the 12th century; the Italian Christian theologian Thomas Aquinas (1225–74), and the German theologian Meister Eckhart (1260–1327) in the 13th century, are recognised intellectualists.