From Infogalactic: the planetary knowledge core
(Redirected from Intercosmos)
Jump to: navigation, search
For the film, see Interkosmos (film).

The program included the allied east-European nations of the Warsaw Pact, CoMEcon, and other socialist nations like Afghanistan, Cuba, Mongolia, and Vietnam. In addition, pro-Soviet non-aligned nations such as India and Syria participated, and even France, despite it being a capitalist nation and part-time US/NATO ally.[1][2]

Following the Apollo–Soyuz Test Project, there were talks between NASA and Interkosmos in the 1970s about a "Shuttle-Salyut" program to fly Space Shuttle missions to a Salyut space station, with later talks in the 1980s even considering flights of the future Soviet shuttles from the Buran programme to a future US space station.[3] Whilst the Shuttle-Salyut program never materialized during the existence of the Soviet Interkosmos program, after the dissolution of the Soviet Union the Shuttle–Mir Program would follow in these footsteps and pave the way to the International Space Station.

Beginning in April 1967 with unmanned research satellite missions, the first manned mission occurred in February 1978.[2] Interkosmos missions enabled 14 non-Soviet cosmonauts to participate in Soyuz space flights between 1978 and 1988. The program was responsible for sending into space the first citizen of a country other than the USA or USSR; Vladimír Remek of Czechoslovakia.[1] Interkosmos also resulted in the first black and Hispanic person in space, Arnaldo Tamayo Méndez of Cuba, and the first Asian person in space, Phạm Tuân of Vietnam. Of the countries involved, only Bulgaria sent two cosmonauts in space, though the French spationaut, Jean-Loup Chrétien, flew on two separate flights.

The manned Interkosmos missions also had political goals as a means of strengthening Soviet relations with the Warsaw Pact nations when evidence of discontent in them was raising its head. 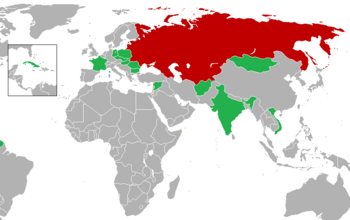 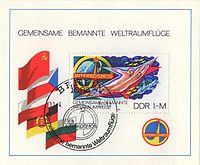 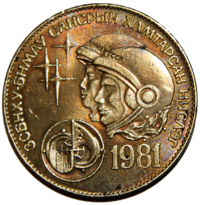 A commemorative coin issued in Mongolia

Generally the most films associated with programs are propaganda short TV documents and relations from that era. Except for fictional Interkosmos from 2006, and cooperation document from 2009(in Polish and maybe in other languages too) titled "Lotnicy Kosmonauci"(Aviators-Cosmonauts).[6]