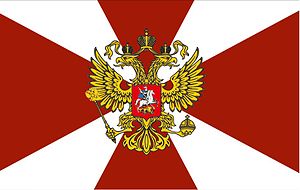 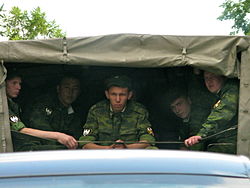 Internal Troops of Russia in 2012

The Internal Troops, full name Internal Troops of the Ministry for Internal Affairs (MVD) (Russian: Внутренние войска Министерства внутренних дел, Vnutrenniye Voiska Ministerstva Vnutrennikh Del; abbreviated ВВ, VV); alternatively translated as "Interior (Troops or Forces)" is a paramilitary gendarmerie-like force in the now-defunct Soviet Union and in some of its successor countries, including in Russia, Ukraine (until 2014), Azerbaijan and Tajikistan. Internal Troops are subordinated to the interior ministries of the respective countries.

They were designed to be used to support and reinforce the Militsiya, deal with large-scale crowd control, internal armed conflicts, prison security (except in Russia) and safeguarding of highly-important facilities (like nuclear power plants). As such, the force was and is involved in the various conflicts and violent disturbances in the history of the Soviet Union and modern Russia, including the Russian Civil War, World War II, mass repressions of Stalinist era, and the Chechen Wars. During wartime, the Internal Troops falls under armed forces military command and fulfill the missions of local defence and rear area security.

History of the Soviet Internal Troops

The Soviet Internal Troops were formed in 1919 under the Cheka (later NKVD, and were known as "NKVD Troops"), remained there with all the mergers and splittings of Soviet state security services and ended up under the control of the police-like MVD. The most well-known of the Internal Troops divisions is OMSDON based near Moscow which traces its roots to the "OSNAZ" detachment of the VChK (formerly 1st Automobile Fighting Detachment of the VTsIK). It was later reorganized into the DON (Special-Purpose Division) of the OGPU and the NKVD. 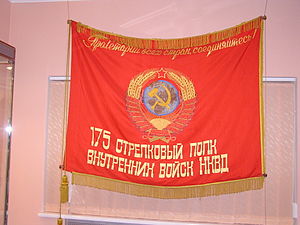 In July 1941, formations of the NKVD were providing security for government installations, railway lines, and industrial centres.[1] Railway security forces totalled 62,100, comprising nine divisions and five brigades securing 1,700 sites. Operational forces, the direct forerunners of the Internal Troops, included 11 regiments stationed in the western military districts, seven regiments and three battalions in the internal districts, and the F.E. Dzerzhinsky Independent Special Designation Division in Moscow (transferred from the OGPU in 1934). In October 1940, a specialised NKVD force had also been formed to assist with local air defence for important areas. By June 1941 this new Main Directorate for Local Antiaircraft Defence had three regiments, including in Moscow, and four battalions, all engineer-anti-chemical units. Another division and five brigades totalling just under 30,000 men were in the process of formation.

During World War II, most units of the NKVD Internal Troops were engaged alongside Red Army forces against Axis troops. They participated in the defense of Moscow, Leningrad, the Brest Fortress, Kiev, Odessa, Voronezh, Stalingrad, the North Caucasus and were heavily engaged during the Battle of Kursk.

Typically, NKVD Internal Troops were defensive in nature, although they played a particularly instrumental role during the Battle of Moscow, the Siege of Leningrad, and the Battle of Stalingrad where the 10th NKVD Rifle Division suffered almost 90% casualties during the battle. Large VV units also stayed in the rear to maintain order, fight enemy infiltrators and to guard key installations (such as the armament manufacturing complex at Tula, protected by the 156th NKVD regiment in 1941)[2] and the railway installations guarded by the 14th Railway Facilities Protection Division NKVD.

Altogether, more than 53 Internal Troops divisions and 20 Internal Troops brigades were on active duty during the war. Of those, 18 units were awarded battle honors (military decorations or honorary titles). A total of 977,000 servicemen were killed in action. More than 100,000 soldiers and officers received awards for gallantry in the face of the enemy, and 295 servicemen were awarded the "Hero of the Soviet Union" title.

After the war's end, Internal Troops played an important role in fighting local anti-Soviet partisans in the Baltic states (such as the Forest Brothers) and the Ukrainian Insurgent Army. In 1953, the Internal Troops suppressed the Vorkuta labor camp uprising with gunfire, which resulted in death of at least 100 political prisoners.

With the beginning of the Khrushchev era and de-Stalinisation, the Internal Troops became significantly reduced in size, but retained their pre-war functions. After the Chernobyl disaster in 1986, Internal Troops personnel were among the cleanup crews ('liquidators'), engaged in security and emergency management activities;[6][7] hundreds of servicemen were exposed to heavy radiation and dozens died. By 1989, with the increasing popular discontent nationwide that had begun to manifest in the USSR, the Internal Troops of the MVD, on orders from the Presidum of the Supreme Soviet, officially became a reporting agency of the MIA after years as a part of the Ministry of Defense.

Breakup of the Soviet Union

Prior to the 1990s, there were 180 regiments (of varying size) of Internal Troops, of which 90 were mainly guards of correctional institutions, important public facilities and public order. Some of them became engaged in the ethnic conflicts that occurred during the Dissolution of the Soviet Union. Their activities during this period included the 1989 violent incident in Tbilisi when VV servicemen used entrenching shovels to decimate a crowd of unarmed Georgian civilians.

Despite being subordinated to a civilian police authority, Internal Troops are a military force with centralized system of ranks, command and service. The chief commander and staff of the Troops report only to Ministry of Internal Affairs, maintaining their separate chain of command. Soviet VV units were predominantly formed up of conscripts drafted by the same system as for the Soviet Army. Modern Troops in Russia and Ukraine are experiencing a slow transition to the contract personnel system. VV officers are trained in both own special academies and Army's military academies.

The main kinds of Internal Troops are field units, prison security units, various facility-guarding units and special forces like Rus. Since the 1980s, the several special forces units that developed within the VV, were created to deal with terrorism and hostage crises. Fields units are essentially light motorized infantry, similar to respective regular army units by their organization and weapons.

Soviet prison security units (Russian: конвойные войска, konvoinyie voyska; criminal slang: vertuhai) were originally consisting of the units that guard the perimeters of the prisons, and the prisoner transport teams (actually konvoi, literally "convoy"). In post-Soviet countries, some or all of the prison-related tasks were transferred to other agencies.

The Guard is a Soviet 1990 drama film, based on the real story of VV soldier who killed his entire prisoner transport unit as a result of dedovschina (brutal hazing system).