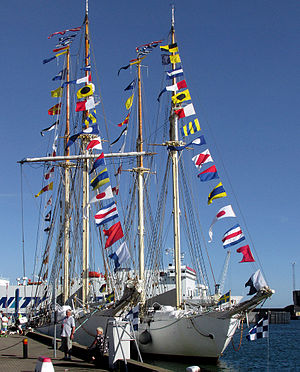 The system of international maritime signal flags is one system of flag signals representing individual letters of the alphabet in signals to or from ships. It is a component of the International Code of Signals (ICS).[1][2]

There are various methods by which the flags can be used as signals:

During the allied occupations of Axis countries after World War II, use and display of those nations' national flags were banned.[citation needed] In order to comply with the international legal requirement that a ship identify its registry by displaying the appropriate national ensign, swallow-tailed versions of the C, D, and E signal flags were designated as, respectively, provisional German, Okinawan, and Japanese civil ensigns. Being swallowtails, they are commonly referred to as the "C-Pennant" (C-Doppelstander), "D-Pennant", and "E-Pennant".[citation needed]

Substitute or repeater flags allow messages with duplicate characters to be signaled without the need for multiple sets of flags.

The four NATO substitute flags are as follows:

The International Code of Signals includes only the first three of these substitute flags. To illustrate their use, here are some messages and the way they would be encoded: