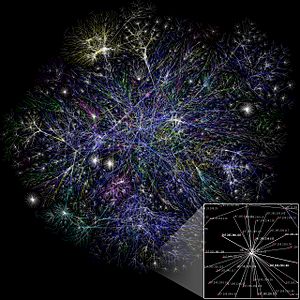 Each line is drawn between two nodes, representing two IP addresses. This is a small look at the backbone of the Internet.

The Internet backbone may be defined by the principal data routes between large, strategically interconnected computer networks and core routers on the Internet. These data routes are hosted by commercial, government, academic and other high-capacity network centers, the Internet exchange points and network access points, that exchange Internet traffic between the countries, continents and across the oceans. Internet service providers, often Tier 1 networks, participate in Internet backbone traffic by privately negotiated interconnection agreements, primarily governed by the principle of settlement-free peering.

Main article: History of the Internet

The first packet-switched computer network was the ARPANET. It used a backbone of routers called Interface Message Processors. Other packet-switched computer networks began to proliferate in the 1970s, eventually adopting TCP/IP protocols or being replaced by newer networks. The National Science Foundation created NSFNET in 1986 by funding six networking sites using 56kbit/s interconnecting links and peering to the ARPANET. In 1987, this new network was upgraded to 1.5Mbit/s T1 links for thirteen sites. These sites included regional networks that in turn connected over 170 other networks. IBM, MCI and Merit upgraded the backbone to 45Mbit/s bandwidth (T3) in 1991.[1] The combination of the ARPANET and NSFNET became known as the Internet. Within a few years, the dominance of the NSFNet backbone led to the decommissioning of the redundant ARPANET infrastructure in 1990.

In the early days of the Internet, backbone providers exchanged their traffic at government-sponsored network access points (NAPs), until the government privatized the Internet, and transferred the NAPs to commercial providers.[2]

The Internet, and consequently its backbone networks, do not rely on central control or coordinating facilities, nor do they implement any global network policies. The resilience of the Internet results from its principal architectural features, most notably the idea of placing as few network state and control functions as possible in the network elements, and instead relying on the endpoints of communication to handle most of the processing to ensure data integrity, reliability, and authentication. In addition, the high degree of redundancy of today's network links and sophisticated real-time routing protocols provide alternate paths of communications for load balancing and congestion avoidance.

The Internet backbone is a conglomeration of multiple, redundant networks owned by numerous companies. It is typically a fiber optic trunk line. The trunk line consists of many fiber optic cables bundled together to increase the capacity. The backbone is able to reroute traffic in case of a failure.[2] The data speeds of backbone lines have changed with the times. In 1998[citation needed], all of the United States backbone networks had utilized the slowest data rate of 45 Mbit/s. However the changing technologies allowed for 41 percent of backbones to have data rates of 2,488 Mbit/s or faster by the mid 2000s.[3] Fiber-optic cables are the medium of choice for Internet backbone providers for many reasons. Fiber-optics allow for fast data speeds and large bandwidth; they suffer relatively little attenuation, allowing them to cover long distances with few repeaters; they are also immune to crosstalk and other forms of electromagnetic interference which plague electrical transmission.[4]

Each ISP has its own contingency network and is equipped with an outsourced backup. These networks are intertwined and crisscrossed to create a redundant network. Many companies operate their own backbones, that are all interconnected at various Internet exchange points (IXPs) around the world.[5] In order for data to navigate this web, it is necessary to have backbone routers, which are routers powerful enough to handle information on the Internet backbone and are capable of directing data to other routers in order to send it to its final destination. Without them, information would be lost.[6]

Economy of the backbone

Backbone providers of roughly equivalent market share regularly create agreements called peering agreements, which allow the use of another's network to hand off traffic where it is ultimately delivered. Usually they do not charge each other for this, as the companies get revenue from their customers regardless.[2][8]

Antitrust authorities have acted to ensure that no provider grows large enough to dominate the backbone market. In the United States, the Federal Communications Commission has decided not to monitor the competitive aspects of the Internet backbone interconnection relationships as long as the market continues to function well.[2]

The government of Egypt shut down the four major ISPs on January 27, 2011 at approximately 5:20 p.m. EST.[9] Evidently the networks had not been physically interrupted, as the Internet transit traffic through Egypt, such as traffic flowing from Europe to Asia, was unaffected. Instead, the government shut down the border gateway protocol (BGP) sessions announcing local routes. BGP is responsible for routing traffic between ISPs.[10]

Only one of Egypt's ISPs was allowed to continue operations. The ISP Noor Group provided connectivity only to Egypt's stock exchange as well as some government ministries.[9] Other ISPs started to offer free dial-up Internet access in other countries.[11]

Europe is a major contributor to the growth of the international backbone as well as a contributor to the growth of Internet bandwidth. As of 2003, Europe is credited with 82 percent of the world's international cross-border bandwidth.[12] The company Level 3 Communications has begun to launch a line of dedicated Internet access and virtual private network services which gives large companies direct access to the tier 3 backbone. Connecting companies directly to the backbone will provide enterprises faster Internet service which meets a large market demand.[13]

Certain countries around Caucasus have very simple backbone networks; for example, in 2011, a woman in Georgia pierced a fiber backbone line with a shovel and left the neighboring country of Armenia without Internet access for 12 hours. The country has since made major developments to the fiber backbone infrastructure, but progress is slow due to lack of government funding.[14]

Japan's Internet backbone needs to be very efficient due to the high demand for the Internet and technology in general. Japan had over 86 million Internet users in 2009, and it is projected to climb to nearly 91 million Internet users by 2015. Since Japan has a demand for fiber to the home, Japan is looking into tapping a fiber-optic backbone line of Nippon Telegraph and Telephone (NTT), a domestic backbone carrier, in order to deliver this service at cheaper prices.[15]