From Infogalactic: the planetary knowledge core
Jump to: navigation, search
For other uses, see Runet (disambiguation).
Not to be confused with Russian-language Internet or Runet (terminology). 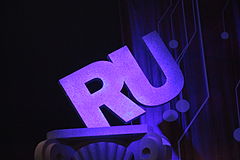 Internet in Russia or Russian Internet (Russian: российский Интернет which means Russia-related Internet) and sometimes Runet (unclear term) is a part of the Internet which is related to Russia. As of 2015[update] Internet access in Russia is available to businesses and to home users in various forms, including dial-up, cable, DSL, FTTH, mobile, wireless and satellite. In September 2011 Russia overtook Germany on the European market with the highest number of unique visitors online.[1] In March 2013 a survey found that Russian had become the second most commonly used language on the web.[2]

Internet in Russia is also sometimes called Runet, although that term mostly refers to the Russian-language Internet.

Retrospectively, "networking" of "data" in the Russian language can be traced to the spread of mail and journalism in Russia, and information transfer by technical means came with the telegraph and radio (besides, an 1837 sci-fi novel Year 4338, by the 19th-century Russian philosopher Vladimir Odoevsky, contains predictions such as "friends' houses are connected by means of magnetic telegraphs that allow people who live far from each other to talk to each other" and "household journals" "having replaced regular correspondence" with "information about the hosts’ good or bad health, family news, various thoughts and comments, small inventions, as well as invitations"[3]).

Computing systems became known in the USSR by the 1950s. Starting from 1952, work was conducted in the Moscow-based Institute of Precision Mechanics and Computer Engineering (headed by Sergei Lebedev) on automated missile defense system which used a "computer network" which calculated radar data on test missiles through central machine called M-40 and was interchanging information with smaller remote terminals about 100—200 kilometers distant.[4] The scientists used several locations in the USSR for their works, the largest was a massive test range to the West from Lake Balkhash. In the meantime amateur radio users all over USSR were conducting "P2P" connections with their comrades worldwide using data codes. Later, a massive "automated data network" called Express was launched in 1972 to serve the needs of Russian Railways.

From the early 1980s the All Union Scientific Research Institute for Applied Computerized Systems (VNIIPAS) was working to implement data connections over the X.25 telephone protocol. A test Soviet connection to Austria in 1982 existed, in 1982 and 1983 there were a series of "world computer conferences" at VNIIPAS initiated by the U.N. where the USSR was represented by a team of scientists from many Soviet Republics headed by biochemist Anatoly Klyosov. The other participating countries were the UK, USA, Canada, Sweden, FRG, GDR, Italy, Finland, Philippines, Guatemala, Japan, Thailand, Luxembourg, Denmark, Brazil and New Zealand.[5]

Also, in 1983 the San Francisco Moscow Teleport (SFMT) was started by VNIIPAS and an American team which included Joel Schatz, Michael Kleeman and Chet Watson with initial financial support from Henry Dakin. SFMT provided email service using the PeaceNet platform and multi-lanaguge support. It also undertook several slowscan video links between the two country, including supporting physicians including UCLA's Bob Gale in treating patients exposed in the Chernobyl accident. It later founded a for profit phone and data provider SovAm (Soviet-American) Teleport in the later 80s. Meanwhile, on April 1, 1984 a Fool's Day hoax about "Kremlin computer" Kremvax was made in the English-speaking Usenet. There are reports of spontaneous Internet (UUCP and telnet) connections "from home" through X.25 in the USSR in as early as 1988. In 1990 a GlasNet non-profit initiative by the US-based Association for Progressive Communications sponsored Internet usage in several educational projects in the USSR (through Sovam). 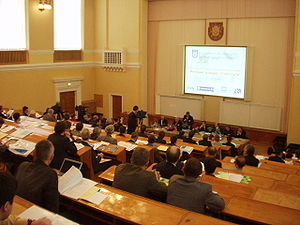 Conference "Internet and Science: 15 years of going" in the Kurchatov Institute on November 10, 2005

In 1990—1991 Relcom's network was rapidly expanding, it joined EUnet and was used to spread news about the Soviet coup attempt of 1991 worldwide while coupers through KGB were trying to suppress mass media activity on the subject. [6] After the fall of the USSR many former Soviet state-controlled structures were inherited by the Russian Federation, vast telephone networks among them.[7] With the transformation of the economy, market-based telecommunication industries grew quickly, various ISPs appeared.

Meanwhile, the first Russian FidoNet node reportedly started in October 1990 in Novosibirsk, and the USSR was included in FidoNet's Region 50. Russian FidoNet activity did contribute to the development of Runet, as mass-networking over BBSes was for a time more popular than over the Internet in the early 90s.

In March of 1991 the National Science Foundation began to allow Eastern Bloc countries to connect to the global TCP/IP network (the "Internet proper"). [8]

By the mid-1990s, computer networks (where TCP/IP was replacing UUCP) appeared in many branches of regular life and commerce in Post-Soviet states. The Internet became a popular means of communication for anyone in the world who spoke Russian. National so-called Nets of former Soviet Republics began to occur (e.g. Uznet, Kaznet and others).

In October 2007 then Deputy Prime Minister Dmitry Medvedev announced that all of schools in Russia (about 59,000) were connected to the Internet, but later concerns were publicized that there were problems with a contractor to serve them. Also in December 2007, as a follow-up to the noted Ponosov's Case, which dealt with the use of illegal software in Russian schools, plans were announced to officially test Linux in the schools of Perm Krai, Tatarstan and Tomsk Oblast to determine the feasibility of further implementing Linux-based education in the country's other regions.[9] In subsequent years test results were considered successful, but new organizational problems appeared, including obscurities with distribution of funds assigned by state.[10]

According to statistics of the European Council, in the second half of 2012 the number of new subscribers connected by technology FTTx (fiber to building) in Russia increased by 2.2 million people, more than all 27 countries of the European Union combined. The total number of households with lets FTTx connection was 7.5 million. This means that in 2012 over 40% of the fixed line broadband users were connected by fiber optics.[11] 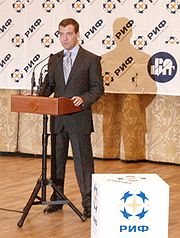 The prominent Public Opinion Foundation FOM (ФОМ) in March 2007 issued a report that found 28 million people of 18 years and older in Russia (25%) had used the Internet within the last six months (monthly users 23.9/21%; daily 10.1/9%).[12] In November 2006 TNS Gallup Media in a report called by some sources "first quality Internet audience research in Russia" put a monthly Russian audience at more than 15 million.[13] The Rukv.ru monitoring project found 1,001,806 WWW-addresses within .ru and .su responding in March 2008.[14] The national domain registration service RU-Center announced creation of millionth .ru domain on September 17, 2007 (about 200 thousand of domains are thought to be 'parked' by squatters).

On April 3, 2008, the RIF-2008 was opened by president-elect of Russia Dmitry Medvedev, who said in the opening address to the forum that he estimates Runet to be populated by 40 million users, or 28 percent of the population. He also stated that Russian sites do $3 billion in annual transactions and have $370 million in advertising revenue.[15]

In October 2008 President Medvedev started his own video blog, which in April 2009 was expanded with the separately moderated version in LiveJournal.[16]

By March 2011 the total number of broadband subscribers reached 16.5 million with penetration at almost 30%. These numbers increased within two years by 180% against 9 million in 2009. The highest penetration rate above 70% is in Moscow and Saint-Petersburg, these two cities also makes up a quarter of all subscribers (3.2 and 1.2 million respectively).[19]

In September 2011, Russia overtook Germany as the European market with the highest number of unique visitors online.[20]

Since 2013, the state has employed Internet users in order to spread propaganda advocating activities of the Russian government and discrediting opposition and Western countries. The major organization employing them, "Internet Issledovania" (Russian: Интернет исследования), initially had an office in Olgino, Saint Petersburg, and subsequently moved to a bigger office to Savushkina Street, also in Saint Petersburg. The employees have to be present in the office for 12 hours per day every second day. They are involved in various activities including creating of visibility of mass-support of the government in social media (both in Russian and in English), propagating texts between different media, and collectively attacking users with anti-government views, often using multiple identities. The salary is fixed and is only paid if an employees has written a fixed number of comments per day not shorter than a fixed number of letters. The comments must contain key words, a fixed set for every day. Collectively, they are known as "Kremlin trolls" or "Olgino trolls".[22][23] The same organization also hosts a number of websites, including the Kharkov News Agency, which claim to be news agencies operating from Eastern Ukraine or from the Donbass area and providing local news, but in fact have no staff outside the Saint Petersburg office building.[23][24] 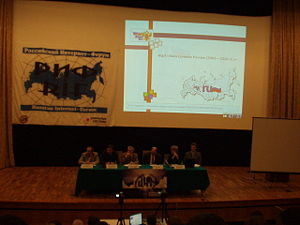 The development of Internet infrastructure in Russia began with development of analog modem-based computer networks in Soviet cities, primarily in scientific institutions. The first one to connect UNIX email hosts country-wide (including Soviet Republics) was the Relcom organization which formed on August 1, 1990 at the Kurchatov nuclear physics institute in Moscow. They were functioning together with partner programming cooperative Demos, named after the Soviet-made DEMOS Unix-like operating system. In August 1990 they established regular email routing with an Internet node in Helsinki University over a paid voice line.

In 2005 the Chelyabinsk-Khabarovsk Fiber-Optic Communication Line was laid-down which extends for 10 thousand kilometers. The minimum transmission rate is 120 Gigabits per second.[25]

Plenty of local commercial ISPs function in large cities, but most of the existing country-wide cable lines are held by small number of large operators such as former "monopolist", the state-controlled Rostelecom and the railways-affiliated Transtelecom, which operates country biggest DWDM fiber backbone. Cell phone coverage with the digital services such as GPRS is almost ubiquitous. In year 2007 the Golden Telecom company has constructed a massive Wi-Fi network in Moscow for commercial use which is recognized as the largest urban wireless network in the world.[26] The Black Sea coast of Russia has become an important area for the fiber-optic networks, as it served as a backbone of communication during the Winter Olympic Games in 2014.

In 2011 Rostelecom started implementation of WDM-based equipment on the backbone network for data transmission in the Republic of Dagestan. Due to WDM introduction the fiber-optic communication lines bandwidth increased to 2.5 Gbit/s. Rostelecom invested about 48 million rubles in the project.[28]

Until 2011 the backbone network in Russia was based on DWDM technology with a capacity of 10 and 40 Gbit/s. The operator started projects to expand the capacity of the Transit Europe – Asia transit line at two independent branches. Communication lines are under construction within a second phase of the TEA backbone "High Speed Backbone Transit Europe-Asia". The construction of the first branch completed in 2011 (Khabarovsk – Stockholm). The second branch (Khabarovsk – Frankfurt) was completed in 2013. In addition, the expanded backbones are in the route of Khabarovsk – Nakhodka – Tokyo and Khabarovsk – Hong Kong, where equipment of 100G WDM is also applied.[29]

Presently, MasterTel, based in Moscow and Saint Petersburg, is an ISP that provides high speed fiber-optic lines of up to 10Gbit/s per second to consumers and businesses.[30]