Although successful communication is generally defined as being between two or more individuals, issues concerning the useful nature of intrapersonal communication made some argue that this definition is too narrow but to some extent it is also communication since there is an exchange of message within oneself.

Our ability to talk to ourselves and think in words is a major part of the human experience of consciousness. From an early age, individuals are encouraged by society to introspect carefully, but also to communicate the results of that introspection.[3] Simon Jones and Charles Fernyhough cite research suggesting that our ability to talk to ourselves is very similar to regular speech.[4] This theory originates with the developmental psychologist Lev Vygotsky, who observed that children will often narrate their actions out loud before eventually replacing the habit with the adult equivalent: sub-vocal articulation. During sub-vocal articulation, no sound is made but the mouth still moves. Eventually, adults may learn to inhibit their mouth movements, although they still experience the words as "inner speech".[4][5]

Jones and Fernyhough cite other evidence for this hypothesis that inner speech is essentially like any other action. They mention that schizophrenics suffering auditory verbal hallucinations (AVH) need only open their mouths in order to disrupt the voices in their heads. To try and explain more about how inner speech works, but also what goes wrong with AVH patients, Jones and Fernyhough adapt what is known as the "forward model" of motor control, which uses the idea of "efferent copies".[4] 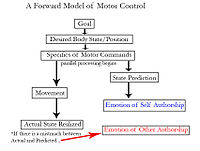 A forward model of motor control. Notice that a prediction of the future state is made just before the movement occurs. Presumably that efference copy is used to establish agency.

In a forward model of motor control, the mind generates movement unconsciously. While information is sent to the necessary body parts, the mind basically faxes a copy of that same information to other areas of the brain. This "efferent" copy could then be used to make predictions about upcoming movements. If the actual sensations match predictions, we experience the feeling of agency. If there is a mismatch between the body and its predicted position, perhaps due to obstructions or other cognitive disruption, no feeling of agency occurs.[4]

Jones and Fernyhough believe that the forward model might explain AVH and inner speech. Perhaps, if inner speech is a normal action, then the malfunction in schizophrenic patients is not the fact that actions (i.e. voices) are occurring at all. Instead, it may be that they are experiencing normal, inner speech, but the generation of the predictive efferent copy is malfunctioning. Without an efferent copy, motor commands are judged as alien (i.e. one does not feel like they caused the action). This could also explain why an open mouth stops the experience of alien voices: When the patient opens their mouth, the inner speech motor movements are not planned in the first place.[4]

Joseph Jordania suggested that talking to oneself can be used to avoid silence. According to him, the ancestors of humans, like many other social animals, used contact calls to maintain constant contact with the members of the group,[6] and a signal of danger was communicated through becoming silent and freezing.[7] Because of the human evolutionary history, prolonged silence is perceived as a sign of danger and triggers a feeling of uneasiness and fear. According to Jordania, talking to oneself is only one of the ways to fill in prolonged gaps of silence in humans. Other ways of filling in prolonged silence are humming, whistling, finger drumming, or having TV, radio or music on all the time.

Intrapersonal communication can be facilitated through both first person and second person pronouns. However, through years of research, scholars have already realized that people tend to use first-person and second-person self-talk in different situations. Generally speaking, people are more likely to use the second-person pronoun referring to the self when there is a need for self-regulation, an imperative to overcome difficulties, and facilitation of hard actions [8][9] whereas first person intrapersonal talks are more frequently used when people are talking to themselves about their feelings. [10]

Recent research also has revealed that using the second-person pronoun to provide self-suggestion is more effective in promoting the intentions to carry out behaviors and performances. [11] The rationale behind this process lies in the idea of classical conditioning, a habit theory which argues that repetition of a stable behavior across consistent contexts can strongly reinforce the association between the specific behavior and the context. Building on such rationale, forming internal conversations using second-person pronouns can naturally reproduce the effect of previous encouragement or positive comments from others, as people have already gotten used to living under second-person instructions and encouragements in their childhood. This self-stimulated encouragement and appraisals from previous experience could also generate positive attitudes, intentions, and behaviors.

Criticism of the concept

Dr. Sian Beilock,[13] cognitive psychology professor at the University of Chicago, presents several techniques in her book Choke, that could offer help to anyone facing a challenging situation and struggling with mental chatter. It has been widely accepted that speaking in front of a crowd causes people considerable stress. Dr. Beilock suggests that practicing in front of family or friends does not help overcome this fear. She states that these so-called "friendly faces" can cause the person to become more self-conscious which can lead to the possibility of further choking. The elevated motivation to please parents or friends is what she theorizes causes brain functions to freeze.[14] Since self talk is a form of self-regulation, parents or instructors could use this technique to help focus a young student's inner dialog towards a process goal instead of an outcome based goal. When applied in an educational psychology classroom scenario, teachers can instruct students to focus on presentation material ignoring consequences, expectations, and/or the attempt to impress instructors or classmates.