Irène Joliot-Curie (12 September 1897 – 17 March 1956) was a French scientist, the daughter of Marie Curie and Pierre Curie and the wife of Frédéric Joliot-Curie. Jointly with her husband, Joliot-Curie was awarded the Nobel Prize for Chemistry in 1935 for their discovery of artificial radioactivity. This made the Curies the family with the most Nobel laureates to date.[1] Both children of the Joliot-Curies, Hélène and Pierre, are also esteemed scientists.[2]

Curie was born in Paris, France. After a year of traditional education, which began when she was 10 years old, her parents realized her obvious mathematical talent and decided that Irène’s academic abilities needed a more challenging environment. Marie joined forces with a number of eminent French scholars, including the prominent French physicist Paul Langevin to form “The Cooperative,” a private gathering of some of the most distinguished academics in France. Each contributed to educating one another’s children in their respective homes. The curriculum of The Cooperative was varied and included not only the principles of science and scientific research but such diverse subjects as Chinese and sculpture and with great emphasis placed on self-expression and play.[3]

This arrangement lasted for two years after which Curie re-entered a more orthodox learning environment at the Collège Sévigné in central Paris from 1912 to 1914 and then onto the Faculty of Science at the Sorbonne, to complete her Baccalaureate. Her studies at the Faculty of Science were interrupted by World War I.

Initially, Curie was taken to the countryside, but a year later when she turned 18 she was re-united with her mother, Marie-Curie, who was running the twenty mobile field hospitals that she had established. The hospitals were equipped with primitive X-ray equipment made possible by the Curies’ radiochemical research. This technology greatly assisted doctors to locate shrapnel in wounded soldiers, but it was crude and led to both Marie and Irène, who were serving as nurse radiographers, suffering large doses of radiation exposure. Both would eventually die from the consequences of accumulated radiation exposure over their professional life.

After the War, Curie returned to Paris to study at the Radium Institute, which had been built by her parents. The institute was completed in 1914 but remained empty during the war. Her doctoral thesis was concerned with the alpha rays of polonium, the element discovered by her parents (along with radium) and named after Marie’s country of birth, Poland. Curie became Doctor of Science in 1925. 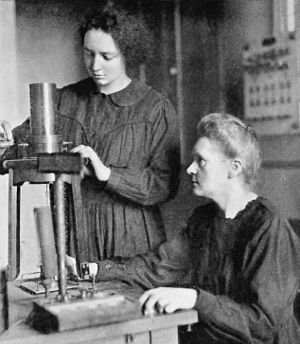 As she neared the end of her doctorate in 1924 she was asked to teach the precise laboratory techniques required for radiochemical research to the young chemical engineer Frédéric Joliot whom she would later come to wed. From 1928 Joliot-Curie and her husband Frédéric combined their research interests on the study of atomic nuclei. Though their experiments identified both the positron and the neutron, they failed to interpret the significance of the results and the discoveries were later claimed by Carl David Anderson and James Chadwick respectively. These discoveries would have secured greatness indeed, as together with J. J. Thomson's discovery of the electron in 1897, they finally replaced John Dalton’s theory of atoms being solid spherical particles.

Finally, in 1934 the Joliot-Curies made the discovery that sealed their place in scientific history. Building on the work of Marie and Pierre, who had isolated naturally occurring radioactive elements, Joliot-Curies realized the alchemist’s dream of turning one element into another, creating radioactive nitrogen from boron and then radioactive isotopes of phosphorus from aluminum and silicon from magnesium. For example, irradiating the main natural and stable isotope of aluminum with alpha particles (i.e. helium nuclei) results in an unstable isotope of phosphorus : 27Al + 4He → 30P + 1n.[4][5][6] By now the application of radioactive materials for use in medicine was growing and this discovery led to an ability to create radioactive materials quickly, cheaply and plentifully. The Nobel Prize for chemistry in 1935 brought with it fame and recognition from the scientific community and Joliot-Curie was awarded a professorship at the Faculty of Science.

Irèn’s group pioneered research into radium nuclei that led a separate group of German physicists, led by Otto Hahn, Lise Meitner, and Fritz Strassman, to discover nuclear fission; the splitting of the nucleus itself and the vast amounts of energy emitted as a result. In fact, Lise Meitner began her now famous calculations in order to show that Irène's results had to be wrong and ended up showing that nuclear fission was possible.[citation needed]

The years of working so closely with such deadly materials finally caught up with Joliot-Curie and she was diagnosed with leukemia. She had been accidentally exposed to polonium when a sealed capsule of the element exploded on her laboratory bench in 1946. Treatment with antibiotics and a series of operations did relieve her suffering temporarily but her condition continued to deteriorate. Despite this Joliot-Curie continued to work and in 1955 drew up plans for new physics laboratories at the University d’Orsay, south of Paris.

The Joliot-Curies had become increasingly aware of the growth of the fascist movement. They opposed its ideals and joined the Socialist Party in 1934, the Comité de vigilance des intellectuels antifascistes a year later, and in 1936 actively supported the Republicans in the Spanish Civil War. In the same year, Joliot-Curie was appointed Undersecretary of State for Scientific Research by the French government, in which capacity she helped in founding the Centre National de la Recherche Scientifique.

The Joliot-Curies had continued Pierre and Marie’s policy of publishing all of their work for the benefit of the global scientific community, but afraid of the danger that might result should it be developed for military use, they stopped. On 30 October 1939 they placed all of their documentation on nuclear fission in the vaults of the French Academy of Sciences, where it remained until 1949.

Joliot-Curie's political career continued after the war and she became a commissioner in the Commissariat à l'énergie atomique. However, she still found time for scientific work and in 1946 became director of her mother’s Institut du Radium (Radium Institute).

Joliot-Curie became actively involved in promoting women’s education, serving on the National Committee of the Union of French Women (Comité National de l'Union des Femmes Françaises) and the World Peace Council. Joliot-Curies were given memberships to the French Légion d'honneur; Irène as an officer and Frédéric as a commissioner, recognising his earlier work for the resistance. 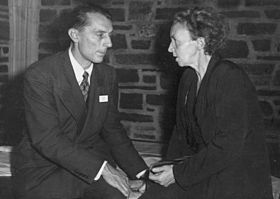 Irène and Frédéric hyphenated their surnames to Joliot-Curie after they married in 1926. Eleven months later, their daughter Hélène was born; she would also become a noted physicist. Their son, Pierre, a biologist, was born in 1932.

During World War II Joliot-Curie contracted tuberculosis and was forced to spend several years convalescing in Switzerland. Concern for her own health together with the anguish of leaving her husband and children in occupied France was hard to bear and she did make several dangerous visits back to France, enduring detention by German troops at the Swiss border on more than one occasion. Finally, in 1944 Joliot-Curie judged it too dangerous for her family to remain in France and she took her children back to Switzerland.

In 1956, after a final convalescent period in the French Alps, Joliot-Curie was admitted to the Curie hospital in Paris, where she died on 17 March at the age of 58 from leukemia.[7]

Joliot-Curie's daughter, Hélène Langevin-Joliot, is a nuclear physicist and professor at the University of Paris; her son, Pierre Joliot, is a biochemist at Centre National de la Recherche Scientifique.