The Air Corps (Irish: An tAerchór) is the air component of the Defence Forces of Ireland.[8] Through a fleet of fixed and rotary wing aircraft, it provides military support to the Army and Naval Service, together with non-military air services such as Garda air support, air ambulance, fisheries protection and the Ministerial Air Transport Service. The primary airbase is Casement Aerodrome located at Baldonnel, County Dublin.[9] 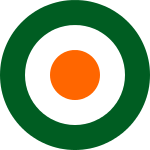 With the establishment of the Defence Forces in 1924 the Air Service became the new Army's Air Corps and remained part of the Army until the 1990s.

In 1938 four Gloster Gladiator biplane fighters were delivered – a further eight were ordered but were embargoed by the outbreak of the Second World War. Other aircraft purchased from the United Kingdom before the outbreak of war included 16 Avro Anson Mark I maritime patrol bombers, 3 Supermarine Walrus amphibians, 6 Westland Lysander Mark II army co-operation aircraft and a number of trainers.[11] 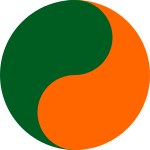 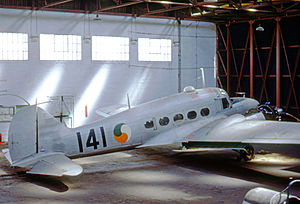 During World War II (or The Emergency) there are no records of Air Corps planes engaging any belligerent aircraft, although dozens of escaped barrage balloons were shot down. Requests for more aircraft from Britain resulted in 13 obsolete Hawker Hector biplane light bombers, supplied during 1941. 163 belligerent aircraft force-landed in Ireland during the war, and in this way the Air Corps acquired a Lockheed Hudson, a Fairey Battle, and three Hawker Hurricanes. The Hurricane gave the Air Corps a proven modern fighter, and – at peak – 20 flew in Irish colours.[9]

After the war, the Hurricanes were replaced by Supermarine Seafires and a few two-seat Spitfire trainers. Avro Anson light transports were operated as communications aircraft between 1946 and retirement in 1962. The Percival Provost was introduced in the mid 1950s as the Air Corps initial training aircraft.

The de Havilland Dove became the Corps' transport aircraft. The jet age arrived on 30 June 1956 when the Corps took delivery of a de Havilland Vampire T.55 trainer.[12] In November 1963 the Air Corps took delivery of its first helicopters, SA.316B Alouette IIIs, of which seven remained in service until 2007. During their operational lifetime, 3,300 people were assisted by the Alouette helicopters in their Search and Rescue and air ambulance roles.[citation needed]

During the mid-sixties and early seventies, the Corps played a part in expanding Ireland's film industry. 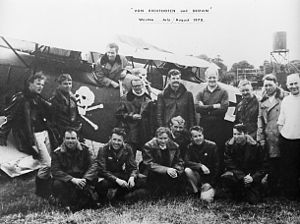 Pilots and engineering staff participated in a 1965 box office success, The Blue Max. The fleet of World War I replicas, owned by ex-RCAF fighter pilot Lynn Garrison's "Blue Max Aviation", was based at Casement Aerodrome in Baldonnel – before being moved to Weston Aerodrome at Leixlip. Here the Corps continued its involvement, providing aircrew and engineering staff to support films such as Darling Lili, Von Richthofen and Brown, Zeppelin and a number of television commercials. Lynn Garrison was also responsible for co-ordinating the first demonstration of the Marchetti SF-260 Warrior at Baldonnel. As a result of this presentation the Corps acquired a number of Warriors.

In the mid-1970s the expansion of the "Ministerial Air Transport Service" (MATS) following Ireland's accession to the European Economic Community (now the European Union) led to the acquisition of the Corps' first business jet, a BAe 125-700.

In 1975 several Fouga Magister CM-170 jet aircraft were purchased secondhand from France. They were used for training, for the Light Strike Squadron and for the Silver Swallows display team. They were withdrawn from service in 1998 and not replaced, leaving the Irish Air Corps without any jet combat aircraft.

In 1977 ten SIAI-Marchetti SF.260WE Warriors were delivered for light training and ground attack roles. Four have been lost in crashes. In 1986 five SA 365Fi Dauphin II were acquired for the SAR role. Two of these were modified for operation from the Naval Service Helicopter Patrol vessel LÉ Eithne, and equipped with crashproof fuel tanks and harpoon deck arrester gear.

As part of Ireland's obligations to the European Union, the Irish Air Corps patrols 132,000 square miles (342,000 km²) of sea. The Air Corps previously employed two of its three Beechcraft 200 Super King Airs for this duty. However, the Super King Airs used for Maritime patrol were disposed of in the 1990s, and the third was allocated to transport duties. 102 Squadron operated one Beech King Air (#BB-672 with tail-number 240), but (as of 2010) it is out of service and hangared. Two previously operated aircraft (#BB-376 and #BB-208, with tail-numbers 232 and 234) were sold in 1991 and 1992 respectively. [11][13] Two CASA C235-100 maritime patrol aircraft now undertake these patrols – and were upgraded in 2006/2007 by EADS CASA to the FITS Persuader standard with enhanced radar, forward looking infra red equipment and a new electronic and avionics suite.

In 2004 eight Pilatus PC-9M trainers were delivered to the Air Corps. The Pilatus aircraft were the first Air Corps aircraft to break with an Air Corps tradition of using consecutive tail-numbers. The General Officer Commanding started the new Pilatus tail-numbers in the 260 series – jumping from tail-number 258 (a Learjet 45) to 260 (the first Pilatus) – skipping tail-number 259. The Pilatus is the first Air Corps aircraft to have ejection seats since the Vampire. The PC-9M has six underwing hard points, and has the capability to be armed with FN HMP250 gun pods, each carrying one M3P machine gun, and FN LAU-7 rocket pods, each carrying seven Folding-Fin Aerial Rockets, for the close air support role. Aircrews have an annual live firing exercise, flying out of Casement Aerodrome at Baldonnel to the coastal range at Gormanston Camp.[15]

Two Eurocopter EC 135P2 Light Utility Helicopters were delivered to the Air Corps in November 2005. The first of four AgustaWestland AW139s were handed over to the Air Corps at Agusta's facility in Milan in November 2006.[16] Two of the AW139 remained in Milan to provide training for Irish pilots before being flown to Ireland in December 2006. These helicopters are another first for the Air Corps as they are delivered with the capability to carry door mounted 7.62mm General Purpose Machine Guns.

On 12 October 2009 an Air Corps instructor, Captain Derek Furniss, and Cadet David Jevens were killed when their Pilatus PC-9 crashed during a training exercise in Connemara, County Galway.[17]

During the 2011 Libyan civil war, the Air Corps was tasked with evacuating approximately forty Irish citizens from the troubled country. The operation involved two Air Corps aircraft (the Learjet and one CN-235), and nine personnel, using Malta as a temporary base.[18][19][20] 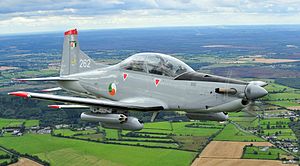 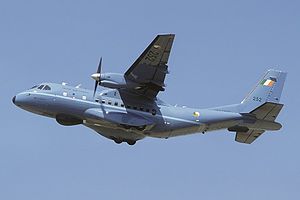 Replaced by the PC-9Ms, several SF-260WE Marchetti Warriors (the previous fixed-wing mainstay of the Air Corps College) were sold to a private reseller in the United States – though one example was retained for the Air Corps museum collection. Several other aircraft (including four Dauphins and one Gazelle) have retired from service, struck off the Air Corps aircraft register and sold to foreign buyers.

The Sikorsky S-61N operated by the Air Corps for Search and Rescue operations was returned to CHC Helicopter. As part of this consolidation to a number of supported types, and following the exercise of two further options on AW139 Utility Helicopters, the previous army support and SAR Alouette fleet, the Alouette IIIs, were "stood down" at a ceremony at Casement aerodrome on 21 September 2007. This aircraft and unit provided the first SAR helicopter service in Ireland and one of the first dedicated national air ambulance services in the world when founded in 1964.

The Eurocopter twin squirrel helicopter of the Garda Air Support Unit was replaced by a second Eurocopter EC135 in January 2008.

The Gulfstream IV was removed from service after corrosion was detected in the undercarriage in July 2014. The government sold the jet in December 2014 for $500,000, and (as of March 2015) the government were considering whether to acquire a replacement.[30][31][32][33] 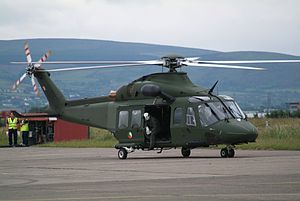 The Air Corps military roles and the functions it carries out are those of an army air corps rather than that of a conventional military air force. The Air Corps air space control and ground attack capacity is limited to low level and during clear weather. Helicopter tactical troop transport is available 24 hour basis through the introduction of Night Vision Goggles. The Air Corps non-military capabilities in aid to the civil power and other Government departments include ministerial transport, fishery protection, 24 hour maritime patrolling, Garda air support, search and rescue over both land and sea, an air ambulance service, aerial firefighting, drugs surveillance and non-combatant evacuation. The Air Corps provides the State with the capacity to meet security and contingent roles but only receives 12% of Defence Forces funding (see Dail Defence Vote 2014).

In July 2015, the Irish government revealed plans to purchase a ground-based long-range air surveillance radar system for the Irish Aviation Authority (IAA) and Defence Forces to keep track of covert aircraft flying in Irish-controlled airspace, including military aircraft that do not file a flight plan and have their transponders switched off. Minister for Defence Simon Coveney said the increased capability would give better coverage of the Atlantic airspace over which the IAA has responsibility. The long-range surveillance radar is reported to cost €10 million, and is seen as a priority purchase to provide the civilian and military authorities with an improved competency in monitoring aerial incursions.[36] Ireland is not a member of NATO, and thus does not benefit from integrated European military radar systems nor NATO equipment. The Irish Air Corps lacks a dedicated air intercept capability, and previous air incursions have seen the Royal Air Force respond to and escort unwelcome aircraft out of Irish controlled airspace.[37]

According to a 2015 Department of Defence Whitepaper, the two CASA CCN-235s are due for replacement in 2019 by "larger more capable aircraft",[38][39] to enhance maritime surveillance and provide a greater degree of utility for transport and cargo carrying tasks.[38] The five Cessnas are due to be replaced[40] with three larger aircraft equipped for ISTAR tasks,[38] and the Pilatus PC9s are due for replacement in 2025.[39]

1 Operations Wing is the main formation responsible for operational fixed-wing flying.[41] This is sub-divided into four individual flying squadrons and two non-flying squadrons, each of which has a dedicated role:

3 Operations Wing is the formation responsible for operational rotary wing flying,[42] and is divided into three flying squadrons and one non-flying squadron

4 Support Wing is primarily concerned with second-line aircraft maintenance (front line maintenance is done by the engineering squadrons in each operational wing).[43] This formation has two squadrons.

5 Support Wing is responsible for logistic support for the Air Corps.[44]

A further unit, independent of No 5 Wing, is the Communication & Information Services Squadron, which has responsibility for communications and IT support for the entire Air Corps.[45]

The Air Corps College is the principal training unit of the Irish Air Corps, where all entrants into the service undertake their training. The College is divided into three distinct schools:[46]

The Air Corps provides an air ambulance service for emergency rapid transfer of patients between hospitals, to hospitals from offshore islands and transferring patients for treatment overseas. The service also transports emergency organ retrieval teams. The aircraft's used are the AW139, EC135, CASA and Learjet.

An Air Corps AW139 also provides an Emergency Aeromedical Service for the National Ambulance Service based out of Custume Army Barracks in Athlone, providing an emergency patient airlift service from scenes of accidents to hospitals.[47][48]

The Air Corps operates two CASA CN235 Maritime Patrol aircraft in support of the fishery protection. These long-range aircraft patrol throughout the Irish exclusive fishery limits. The Cessna's and occasionally the EC135 and AW139 helicopters are used to monitor inshore fishing activities.

The Air Corps provide a Ministerial Air Transport Service (MATS) to assist the President and members of the Government in official engagements at both home and abroad. The Learjet 45 is used specifically for this purpose. The AW139 and occasionally the EC135 and CASA are also used for the MATS. 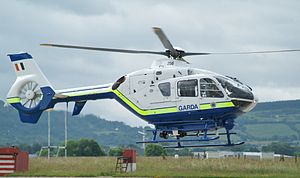 A EC135 T2 from the Garda Air Support Unit

The Air Corps' ranks are similar to those of the Irish Army. The strength is 850 all ranks.[9]