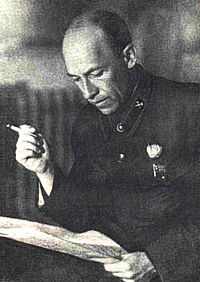 Isaak Osipovich Dunayevsky background Information (Russian: Исаак Осипович Дунаевский; also transliterated as Dunaevski or Dunaevsky; 30 January [O.S. 18 January] 1900 – 25 July 1955) was a Soviet film composer and conductor of the 1930s and 1940s, who achieved huge success in music for operetta and film comedies, frequently working with the film director Grigori Aleksandrov. He is considered one of the greatest Soviet composers of all time. Many of his songs are very well known and held in high regard in Russia and the former Soviet Union. 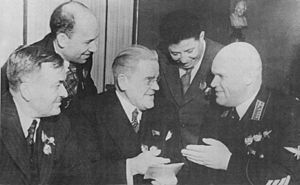 Dunayevsky was born to a Jewish family in Lokhvitsa, Poltava Governorate, Russian Empire in 1900. He studied at the Kharkov Musical School in 1910 where he studied violin under Konstanty Gorski and Joseph Achron. During this period he started to study the theory of music under Semyon Bogatyrev (1890–1960). He graduated in 1919 from the Kharkov Conservatory. At first he was a violinist, the leader of the orchestra in Kharkov. Then he started a conducting career. In 1924 he went to Moscow to run the Theatre Hermitage. After that he worked in Leningrad (1929–1941) as a director and conductor of the "Music-Hall" (1929–34) and then moved to Moscow to work on his operettas and film music.

He was one of the first composers in the Soviet Union to start using jazz. His music was accessible to the masses, with melodious and memorable tunes that secured his success. He wrote the music for three of the most important films of the pre-war Stalinist era, Jolly Fellows, Circus and the film said to be Stalin's favourite film Volga-Volga, all directed by Grigori Aleksandrov.

He died of a heart attack in Moscow in 1955. His last piece, the operetta White Acacia (1955), was left unfinished at his death. It was completed by Kirill Molchanov and staged on 15 November 1955, in Moscow.

A previously unknown opera libretto Rachel (1943) by Mikhail Bulgakov, was later found in his archive. The libretto was based on Guy de Maupassant's Mademoiselle Fifi and was published in a book by Naum Shafer (see references and links below).

A book of his essays and memoirs was published in 1961.

Dunayevsky was married once. He had a son Yevgeny (b. 1932) by his wife Zinaida Sudeikina, and another son Maksim (b. 1945) by his lover, the ballerina Zoya Pashkova. Maksim is also a well-known composer.

His daughter Alina (granddaughter of Isaak), who is living in France (was born in 1983 in Moscow), is continuing her grandfather's and her father's traditions. She is an author-composer, dancer, model and singer. She is the founder of her pop-rock-electro band Markize in Paris. She is well known in rock circles of Europe and Russia. She has issued two albums (one edited and reedited in France and in Russia), several video-clips and several singles. She made a great number of international concerts. In 2009 she was invited as a Guest of Honor to sing in duet with a French pop-singer. She was also invoted to take part in projects of other different artists and has her fan-clubs in different countries. Alina Dunaevskaya: www.alina-dunaevskaya.com