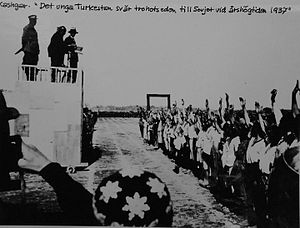 In 1937 an Islamic rebellion broke out in southern Xinjiang. The rebels were 1,500 Turkic Muslims led by Kichik Akhund, tacitly aided by the 36th Division against the pro-Soviet provincial forces of Sheng Shicai.[1][2]

Sheng Shicai had moved against Divisional Gen. Mahmut Muhiti, commander-in-chief of the 6th Uyghur Division and deputy chief of the Kashgar Military Region. Muhiti resented the increased Russian influence and formed a secret group around himself. Sheng feared Muhiti may have allied with Chinese Muslim Gen. Ma Hu-shan. However, the Uighurs of Kashgar heard hostile reports on Ma Hu-shan from Uighur refugees from Khotan suffering under Ma.

Muhiti fled Kashgar on April 2, 1937, with a small number of his subordinates and some amount of gold to India via Yengi Hissar and Yarkand. Shortly before his departure he sent a message to Ma Hu-Shan about his proposed arrival at Khotan. In response, Ma Hu-Shan ordered his troops to prepare a parade and feast to honor Gen. Muhiti. This preparation pulled troops who guarded both mountain passes to Kashmir, which allowed Muhiti the opportunity to change his route and slip through into Kashmir. Muhiti's flight resulted in Uighur troops rising in revolt in Yengi Hissar, Yarkand and Artush, resulting in the execution of all pro-Soviet officials and a number of Soviet advisers. An independent Turkic administration was set up by two of his officers, Kichik Akhund Sijiang, who commanded troops in Artush, and Abdul Niyaz Sijiang, who commanded troops in Yarkand and Yengi Hissar.

Liu Pin, a provincial commander in Kashgar Region with 700 troops at his command, responded to the rebellion by launching a squadron of nine Soviet planes to bomb Yangi Hissar and Yarkand.[3] After Muhiti reached Srinagar in India, the following year, he went on pilgrimage to Mecca.[4] A buildup of Soviet military assets occurred in Xinjiang before the outbreak of war. Around Kashgar, the Soviets sent AA guns, fighter planes, and soldiers of Russian and Kyrgyz origin in great amounts.[5]

The start of the rebellion in southern Xinjiang had an immediate and tragic impact on the fate of about 400 Uyghur students, who had been sent by the Xinjiang government to the USSR (1935–37) to study in the University of Tashkent. They were all arrested on one night in May 1937 by the NKVD—the Soviet secret police—and executed without trials, allegedly by order of Joseph Stalin. Soviet diplomatic staff were also purged throughout the province in Soviet consulates in Urumchi, Karashar, Ghulja, Chuguchak and Altai. Soviet Consul-General in Urumchi Garegin Apresoff (former Soviet consul in Mashhad, Iran and the main architect of Soviet policies in Central Asia and the Middle East), was recalled to Moscow and shot by firing squad for allegedly participating in the so-called Fascist-Trotskyite Plot against Stalin and attempting to overthrow Sheng Shicai's regime on April 12, 1937, on commemoration day of an April Uprising four years earlier. The rebellion is also viewed by some historians as a plot by Mahmut Muhiti and Ma Hu-shan to convert Xinjiang into a base for fighting against Stalinists.[6]

Meanwhile, Ma Hushan and his Chinese Muslim troops of the 36th Division (National Revolutionary Army) were watching the situation with interest, eager to seize more territory. Sheng Shicai surprisingly ordered the 36th Division to quell the rebellion of the 6th Uyghur Division, although initially the 33rd and 34th Regiments of the 6th Uyghur Division, which had been stationed in Kashgar since August 20, 1934, did not join the rebellion because there were those who had previously trained in the USSR (during 1934–35, a number of officers of the 6th Uyghur Division were sent to Tashkent to study at the Military Academy there. Soviet Generals Rybalko, Obuhoff and Dotkin consequently worked in Kashgar in 1934–36, being the Soviet military advisers of Sheng Shicai's administration, and participated in organizing and training of staff of the 6th Uyghur Division). Having received the order, the Tungans attacked Kashgar airfield on 20 May but were defeated. Ten days later 1,500 Islamic irregulars under Kichik Akund attacked and seized Kashgar Old City. His troops wore armbands with the words "Fi sabil Allah" (Arabic: in the way of Allah). The rebellion was followed by a Kyrgyz uprising near Kucha and Muslim unrest in Kumul.[3]

Ma Hushan remained at Khotan watching the situation. His Chief of Staff Pai Tzu-li and Ma Ju-lung, the 1st Brigade commander at Karghalik, persuaded him to strike against Kashgar. Ma Ju-lung arrived on 2 June at Kashgar to reportedly "put down the rebels of Kichik Akhund", but Kichik Akhund had secretly agreed to back off; he transferred his soldiers and himself to Akau while Kashgar was taken by Ma Hushan without a battle. The Fayzabad-Maral Bashi region was taken by Ma Sheng-kuei's 2nd Brigade. Ma Hu-shan strengthened his position in southern Xinjiang and avoided engaging in battle, letting the Turkic Muslim rebels do the fighting as a diversion for Sheng's provincial army.[3] 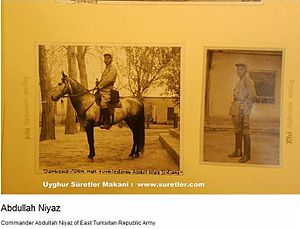 Ma Hushan surrounded Kashgar New City and explained to the British Consulate-General that the Chinese Muslim forces, still officially the Kuomintang 36th Division, were acting in covenant with the Turkics (Uighurs) to overthrow the pro-Soviet provincial government and replace it with an Islamic government loyal to the Republic of China Kuomintang government at Nanjing.[7]

Ma Hushan was paranoid about a Russian attack. He controlled the Kashgar-Khotan area because it offered him a safe escape to British India, where he could take a steamer from Calcutta safely back to China seaports and then to Gansu and Qinghai. He and his officers repeatedly had vowed to attack the Russians in conversations with Peter Fleming and sought to procure gas masks and airplanes to help them fight.

In August 1937, 5,000 Soviet Red Army troops backed by an air unit and an armored regiment moved into Xinjiang at Sheng Shicai's request, whose provincial troops were defeated by Muslim rebels in July 1937 at the battle near Karashar and were unable to continue their advance on the south. At the end of August provincial forces, including White Russians, Red Army and NKVD units, decisively defeated Kichik Akhund's troops at Aksu, with most of his troops being annihilated after they were machine-gunned and bombed in air attacks by a squadron of 24 Soviet airplanes in the open field near Aksu. As a result, Kichik Akhund and Abdul Niyaz escaped to Kashgar with only 200 men. After this battle Ma Sheng-kuei was bribed by Sheng Shicai to defect and turn against Ma Hushan. Ma Sheng-kuei marched on Kashgar on September 1, 1937, only to find that Ma Hushan, Ma Ju-lung and Pai Tzu-li withdrew toward Karghalik with the 1st Brigade. On 7 September Ma Hushan and his officers deserted their troops and fled to India with gold. Ma brought along with him 1000 ounces in gold, which was confiscated by the British.[8]

Chinese Muslim Gen. Ma Zhanshan was allegedly one of the commanders of the Soviet army during the invasion. It was reported that he led Russian troops disguised in Chinese uniforms along with bombers during the attack, which was requested by Sheng Shicai.[9] Other sources do not mention this doubtful participation of Ma Zhanshan in this war, since he was a Commander in Chief of Cavalry in the National Revolutionary Army in China in 1937.[10]

Gen. Chiang Yu-fen, a provincial commander, dispatched his men after Ma Hushan's 1st Brigade, while other provincial forces drove Abdu Niyaz and Kichik Akhund towards Yarkand. Red Army aircraft assisted the provincial forces by dropping bombs, including some that contained mustard gas. These first flew from an airbase in Karakol, USSR, and then from captured airfields in Uchturpan and Kucha.[11] On 9 September Yarkand fell to Sheng, and on 15 September Abdul Niyaz was executed. On October 15 the Soviets bombed the city of Khotan where casualties numbered 2,000.[12][12] The remnants of the 36th division melted away through Kunlun Mountains in Qinghai and Northern Tibet.[3]

Before the war Ma Hushan had exchanged messages with the Nanjing Kuomintang government and had expected them to send aid, as he said in conversations with Peter Fleming. However, in 1937, at the same time of the Soviet attack, China was invaded by Japan in the Second Sino-Japanese War. The pro-Soviet provincial forces of Sheng Shicai established their control over the whole of Xinjiang. All rivals were eliminated, and the defeat of the 36th Division caused the control of the Chinese central government in Xinjiang to cease.

Sheng Shicai set up a memorial to Russians killed in combat by Ma Hushan. The memorial included Russian Orthodox crosses.[13][14]

The Republic of China government was fully aware of the Soviet invasion of Xinjiang province, and Soviet troops moving around Xinjiang and Gansu, but it was forced to conceal these maneuvers to the public as "Japanese propaganda" to avoid an international incident and for continued military supplies from the Soviets.[15]