Istanbul University (Turkish: İstanbul Üniversitesi) is a prominent Turkish university located in Istanbul. The main campus is adjacent to Beyazıt Square in the Fatih district, on the European side of the city.

Istanbul University was established in 1453 by the Ottoman Sultan Mehmed II.[1] However, Richard Honig, a German law historian, who claims that Byzantine and Ottoman traditions could be analyzed together, expressed that the history of Istanbul University can be traced back to 1 March 1321.[2] The university, which was first established in today's main building, was equivalent to Roman universities consisting of schools of medicine, law, philosophy and letters, and is considered to be the pioneer of university education in Istanbul.[2]

It was founded as an institution of higher education named the Darülfünûn (دار الفنون) (House of Multiple Sciences) on 23 July 1846; but the Medrese (Islamic theological school) which was founded immediately after Mehmed II conquered Constantinople (Istanbul) in 1453 is regarded as the precursor to the Darülfünûn which evolved into Istanbul University in 1933.[3] Education in a number of sciences and fields (such as medicine, mathematics, astronomy, cartography, geography, history, philosophy, religion, literature, philology, law, etc.) became available, and, until the 19th century, they were instrumental in educating the ruling cadres of the Ottoman society. However, when the medreses were no longer able to meet the needs of the modern world, a restructuring process began, and as a result, the institutions of higher education called Darülfünûn, the core of Istanbul University, was established.

An institution of higher education named the Darülfünûn-u Osmanî (دار الفنون عثماني) (Ottoman House of Sciences) was created in 1863, but suppressed in 1871.[3] Its first rector was Hasan Tahsini, regarded as one of the most important Ottoman scholars of the 19th century. In 1874 the Imperial University (Darülfünûn-u Sultanî) (دار الفنون سلطاني) started classes in law in French, but was closed in 1881.[3]

The Imperial University, now known as Darülfünûn-u Şahâne (دار الفنون شهان) was refounded in 1900, with the departments of theology, arts, mathematics, science and philology.[3] In 1924, the faculties of law, medicine, arts and sciences were established in Istanbul University (İstanbul Darülfünûnu), as the university was now called.[3] Islamic theology was added in 1925, but in 1933 the university was reorganized without the latter.[3] 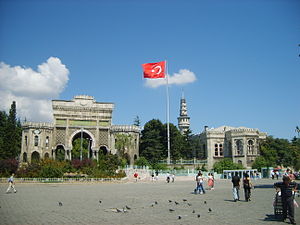 Main entrance gate of Istanbul University on Beyazıt Square, which was known as Forum Tauri (later Forum of Theodosius) in the late Roman period. Beyazıt Tower, located within the campus, is seen in the background, to the right of the flagpole.

The first modern Applied Physics courses were given at the Darülfünûn on 31 December 1863, which marked the beginning of a new period, and on 20 February 1870, the school was renamed as the Darülfünûn-u Osmanî (Ottoman House of Multiple Sciences) and reorganized to meet the needs of modern sciences and technologies. Starting from 1874, some classes of Literature, Law and Applied Sciences were given at the building of Galatasaray High School, which continued regularly until 1881. On 1 September 1900, the school was renamed and reorganized as the Darülfünûn-u Şahâne (Imperial House of Multiple Sciences) with courses on Mathematics, Literature and Theology. On 20 April 1912, the school was renamed as the İstanbul Darülfünûnu (Istanbul House of Multiple Sciences) while the number of courses were increased and the curricula were modernized with the establishment of the Schools of Medicine, Law, Applied Sciences (Physics, Chemistry, Mathematics), Literature and Theology. 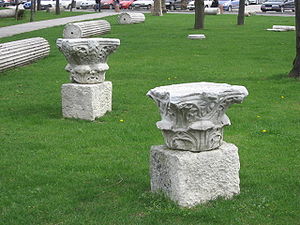 Late Roman and early Byzantine remains at the Istanbul University campus next to Beyazıt Tower. 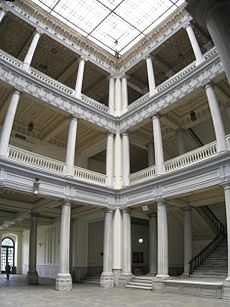 Interior of the main building

The main campus building with its landmark gate was previously used as the headquarters of the Harbiye Nezareti (Ministry of War) by the Ottoman government. Located on the grounds is the Beyazıt Tower, a 85 m (279 ft) tall fire-watch tower. The grounds were previously the location of the Ottoman era Eski Saray (Old Palace). Some Roman and Byzantine ruins are still visible on the grounds.

The university has a teaching staff of 2,000 professors and associates and 4,000 assistants and younger staff. More than 60,000 undergraduate and 8,000 postgraduate students follow the courses offered by Istanbul University every year.

Speakers of the Turkish parliament