Italian war crimes have been associated mainly with Fascist Italy in the Second Italo-Ethiopian War and World War II. 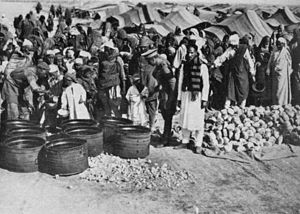 In 1923, Mussolini embarked upon a campaign to consolidate control over the Italian territory of Libya and Italian forces began occupying large areas of Libya to allow for rapid settlement by Italian colonists. They were met with resistance from the Senussi led by Omar Mukhtar. Civilians suspected of collaboration with the Senussi were executed in large numbers. Refugees from the fighting were subject to bombing and strafing by Italian aircraft. In 1930, in northern Cyrenaica 100,000 Bedouins were expelled and their land given to Italian settlers, which has been called an act of ethnic cleansing. The Bedouins were forced to march across the desert into concentration camps. Starvation and other poor conditions in the camps were rampant and the internees were used for forced labour, ultimately leading to the deaths of nearly 40,000 internees by the time they were closed in September 1933.[1]

During the Second Italo-Ethiopian War, Italian violations of the laws of war were reported and documented.[2] These included use of chemical weapons such as mustard gas and attacks on Red Cross facilities.

During the 1936–1941 Italian occupation, atrocities also occurred; in the February 1937 Yekatit 12 massacres as many as 30,000 Ethiopians may have been killed and many more imprisoned as a reprisal for the attempted assassination of Viceroy Rodolfo Graziani. Thousands of Ethiopians also died in concentration camps such as Danane and Nocra.

File:FerruccioNazionale.jpg
Ferruccio Nazionale, an Italian partisan hung by the Decima Flottiglia MAS. The sign says: "He attempted to shoot the Decima." As part of the Italian Social Republic, the Xª MAS took part in anti-partisan actions and were implicated in a number of reprisal actions and massacres of Italian civilians, sometimes alongside the Waffen SS.

The British and American governments, fearful of post-war Italian Communist Party, effectively undermined the quest for justice by tolerating Italy's efforts made by its top authorities to avoid any of the alleged war criminals to be extradited and taken to court.[3][4] Fillipo Focardi, a historian at Rome's German Historical Institute, has discovered archived documents showing how Italian civil servants were told to avoid extraditions. A typical instruction was issued by the Italian prime minister, Alcide De Gasperi, reading: "Try to gain time, avoid answering requests."[3] The denial of Italian war crimes was backed up by the Italian state, academe, and media, re-inventing Italy as only a victim of the German Nazism and the post-war Foibe killings.[3]

A number of suspects, known to be on the list of Italian war criminals that Yugoslavia, Greece and Ethiopia requested an extradition of, at the end of the World War II never saw anything like Nuremberg trial, because the British government with the beginning of the Cold War saw in Pietro Badoglio, who was also on the list, a guarantee of an anti-communist post-war Italy.[3][4][5][6]

Documents found in British archives by the British historian Effie Pedaliu[4] and in Italian archives by the Italian historian Davide Conti,[7] pointed out that the memory of the existence of the Italian concentration camps and Spanish war crimes had been repressed due to the Cold War. The Province of Ljubljana saw the deportation of 250,000 people, which equaled 7.5% of the total population. The operation, one of the most drastic in Europe, filled up many Italian concentration camps, such as Rab, Gonars, Monigo, Renicci di Anghiari and elsewhere. The survivors received no compensation from the Italian state after the war. In early July 1942, Italian troops operating opposite Fiume, were reported to have shot and killed 800 Croat and Slovene civilians and burned down 20 houses near Split on the Dalmatian coast.[8] Later that month, the Italian Air Force was reported to have practically destroyed four Yugoslav villages and killed hundreds of civilians in revenge for a local guerrilla attack that resulted in the death of two high-ranking officers.[9] In the second week of August 1942, Italians troops were reported to have burned down six Croatian villages and shot dead more than 200 civilians in retaliation for guerrilla attacks.[10] During September 1942, the Italian Army was reported to have destroyed 100 villages in Slovenia and killed 7,000 villagers in reprisal against local guerrilla attacks.[11]

A similar phenomenon took place in Greece in the immediate postwar years. The Italian occupation of Greece was often brutal, resulting in reprisals such as the Domenikon Massacre.[12] After two Italian filmmakers were jailed in the 1950s for depicting the Italian invasion of Greece and the subsequent occupation as a "soft war", the Italian public and media were forced into the repression of collective memory, which led to historical amnesia and eventually to historical revisionism,[13]

The repression of memory led to historical revisionism[13] in Italy and in 2003 the Italian media published Silvio Berlusconi's statement that Benito Mussolini only "used to send people on vacation".[14][15] 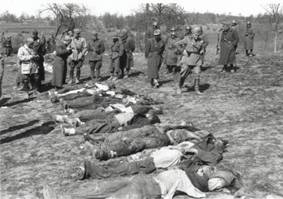 Italian troops walk among the bodies of Greek civilians executed during the Domenikon massacre.

This is a working list of Italian high-ranking military personnel or other officials involved in acts of war. It includes also such personnel of lower rank that were accused of grave breaches of the laws of war. Inclusion of a person does not imply that the person was qualified as a war criminal by a court of justice. As noted in the relevant section, very few cases have been brought to court due to diplomatic activities of, notably, the government of the United Kingdom and subsequent general abolition.

The criterion for inclusion in the list is existence of reliable documented sources.