From Infogalactic: the planetary knowledge core
(Redirected from Italics)
Jump to: navigation, search
This article is about printing. For the handwriting style, see Italic script.

Arrighi's original italic typeface, c. 1527. At that time italic capitals had not yet been designed.

In typography, italic type is a cursive font based on a stylized form of calligraphic handwriting. Owing to the influence from calligraphy, such fonts normally slant slightly to the right. Italics are a way to emphasise key points in a printed text, or when quoting a speaker a way to show which words they stressed. One manual of English usage described italics as "the print equivalent of underlining".[1]

The name comes from the fact that calligraphy-inspired typefaces were first designed in Italy, to replace documents traditionally written in a handwriting style called chancery hand. Ludovico Arrighi and Aldus Manutius (both between the 15th and 16th centuries) were the main type designers involved in this process at the time. Different glyph shapes from roman type are usually used — another influence from calligraphy — and upper-case letters may have swashes, flourishes inspired by ornate calligraphy. An alternative is oblique type, in which the type is slanted but the letterforms do not change shape: this less elaborate approach is used by many sans-serif typefaces. 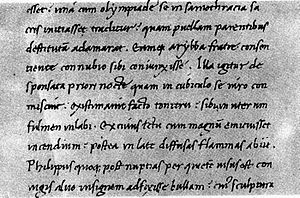 Sample of Niccoli's cursive script, which developed into Italic type

Italic type was first used by Aldus Manutius and the Aldine Press in 1500, in the frontispiece of an edition of Catherine of Siena's letters[2] (although the first complete book in italic was an edition of Virgil dedicated to Italy, published the following year). According to Lynne Truss, Manutius invented the italic typeface.[3] Based on the humanist cursive script first developed in the 1420s by Niccolò de' Niccoli,[4] it served as a condensed type for simple, compact volumes.[5] The punches for these types were cut by Francesco da Bologna (whose surname was Griffo). In 1501 Aldus wrote to his friend Scipio:

We have printed, and are now publishing, the Satires of Juvenal and Persius in a very small format, so that they may more conveniently be held in the hand and learned by heart (not to speak of being read) by everyone.

Unlike the italic type of today, the capital letters were upright roman capitals which were shorter than the ascending lower-case italic letters and used about 65 tied letters (ligatures) in the Aldine Dante and Virgil of 1501. The reason for the upright capitals was that at the time upright capitals were commonly viewed as inscriptional and were often modelled on Roman stone carving.

This Aldine italic became the model for most italic types. It was very popular in its own day and was widely (and inaccurately) imitated. The Venetian Senate gave Aldus exclusive right to its use, a patent confirmed by three successive Popes, but it was widely counterfeited.[5] The Italians called the character Aldino, while others called it Italic.

The slanting italic capital was first introduced by printers in Lyon.[when?]

An example of normal (roman) and true italics text:

An example set in both roman and italic type.

The same example, as oblique text:

The same example as set in oblique type.

Some examples of possible differences between roman and italic type, besides the slant, are below. The transformations from roman to italics are illustrated.

None of these differences are required in an italic; some, like the "p" variant, do not show up in the majority of italic fonts, while others, like the "a" and "f" variants, are in almost every italic. Other common differences include:

Less common differences include a descender on the z and a ball on the finishing stroke of an h, which curves back to resemble a b somewhat. Sometimes the w is of a form taken from old German typefaces, in which the left half is of the same form as the n and the right half is of the same form as the v in the same typeface. There also exist specialized ligatures for italics, such as a curl atop the s which reaches the ascender of the p in sp.

In addition to these differences in shape of letters, italic lowercases usually lack serifs at the bottoms of strokes, since a pen would bounce up to continue the action of writing. Instead they usually have one-sided serifs that curve up on the outstroke (contrast the flat two-sided serifs of a roman font). One uncommon exception to this is Hermann Zapf's Melior. (Its outstroke serifs are one-sided, but they don't curve up.) 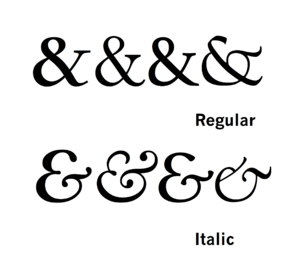 Outside the regular alphabet, there are other italic types for symbols: 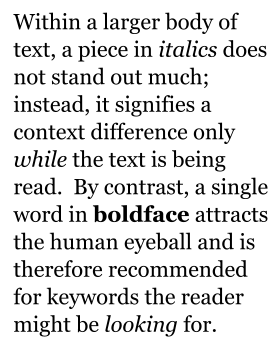 A common view of when to use italics and bold text. An additional option for emphasis is to use small capitals for a word or name to stand out.[6][7] 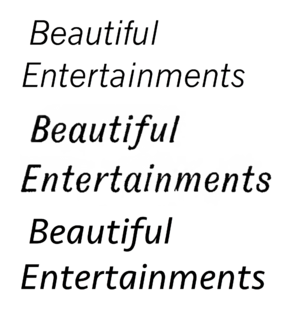 Oblique type (or slanted, sloped) is text that is slanted, but lacking the cursive letterforms of true italics. Many sans-serif typefaces use oblique designs instead of italic ones; some have both italic and oblique variants. Professional font designers have described the effect of using an oblique as less soft and more insistent.[12][13]

Almost all modern serif fonts have true italic designs, Bookman Old Style being a notable exception.[14] Some serif designs primarily intended for headings rather than body text are not provided with an italic, Cooper Black, Engravers and some releases of Baskerville Old Style being common examples of this. In addition, computer programmes may generate an 'italic' style by simply slanting the regular style if they cannot find an italic or oblique style, though this may look awkward with serif fonts for which an italic is expected. Professional designers normally do not simply tilt fonts to generate obliques but make subtle corrections to correct the distorted curves this introduces.

Many font families, primarily sans-serif fonts, have called the oblique fonts italic, whether or not they include true italic characteristics. Examples of typefaces offering italic designs that are actually oblique include News Gothic, Avenir, Univers and Helvetica Neue. Sometimes, when an established sans-serif design is being expanded the newly introduced fonts are named 'italic' to distinguish them from the older 'oblique' designs. In these cases, the oblique font may have a different tilt angle from the italic font. For example, Univers 65 Bold Oblique has a smaller leaning angle than the Univers 66 Bold Italic. The name 'Inclined' is also used to name oblique type fonts (e.g.: Helvetica Greek).

In the late nineteenth and early twentieth centuries, a number of French and German type foundries such as Genzsch & Heyse offered serif typefaces with oblique rather than italic designs, but these designs (such as Genzsch Antiqua) have mostly disappeared.[15][16] Stanley Morison of Monotype made a late attempt to promote this style in 1925 by commissioning the typeface Perpetua from Eric Gill with a sloped roman rather than an italic, but Monotype management vetoed the original design in favour of a true italic.[17][18]

If something within a run of italics needs to be italicized itself, the type is normally switched back to non-italicized (roman) type: "I think The Scarlet Letter had a chapter about that, thought Mary." In this example, the title ("The Scarlet Letter") is within an italicized thought process and therefore this title is non-italicized. It is followed by the main narrative that is outside both. It is also non-italicized and therefore not obviously separated from the former. The reader must find additional criteria to distinguish between these. Here, apart from using the attribute of italic–non-italic styles, the title also employs the attribute of capitalization. Citation styles in which book titles are italicized differ on how to deal with a book title within a book title; for example, MLA style specifies a switch back to roman type, whereas The Chicago Manual of Style (8.184) specifies the use of quotation marks (A Key to Whitehead's "Process and Reality"). An alternative option is to switch to an 'upright italic' style if the typeface used has one; this is discussed below. 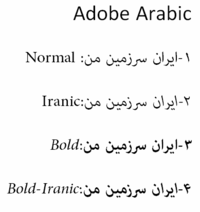 In certain Arabic fonts (e.g.: Adobe Arabic, Boutros Ads), the italic font has the top of the letter leaning to the left, instead of leaning to the right. Some font families, such as Venus, Roemisch, Topografische Zahlentafel, include left leaning fonts and letters designed for German cartographic map production, even though they do not support Arabic characters.

in the 1950s Gholamhossein Mosahab invented the Iranic font style, a back-slanted italic form to go with the right-to-left direction of the script.[19]

Since italic styles clearly look different from regular (roman) styles, it is possible to have 'upright italic' designs that have a cursive style but remain upright. In Latin-script countries, upright italics are rare but are sometimes used in mathematics or in complex texts where a section of text already in italics needs a 'double italic' style to add emphasis to it. Complex typefaces may therefore offer them as an alternative to the default conventional italic style. Fonts with upright or near-upright italics include Jan van Krimpen's Romanée, Eric Gill's Joanna, Martin Majoor's FF Seria and Frederic Goudy's Deepdene.

Some typeface families may have alternative styles of italics for different uses. Donald Knuth's Computer Modern has an alternate upright italic as an alternative to its standard italic, since its intended use is complex mathematics typesetting. The popular book typeface Bembo has been sold with two italics: one reasonably straightforward design that is commonly used today, and an alternative upright 'Condensed Italic' design, far more calligraphic, as a more eccentric alternative.[20][21][22]

The Chicago Manual of Style suggests that to avoid problems such as overlapping and unequally spaced characters, parentheses and brackets surrounding text that begins and ends in italic or oblique type should also be italicized (as in this example). An exception to this rule applies when only one end of the parenthetical is italicized (in which case roman type is preferred, as on the right of this example).

In The Elements of Typographic Style, however, it is argued that since Italic delimiters are not historically correct, the upright versions should always be used, while paying close attention to kerning.

In media where italicization is not possible, alternatives are used as substitutes:

In HTML, the i element is used to produce italic (or oblique) text. When the author wants to indicate emphasized text, modern Web standards recommend using the em element, because it conveys that the content is to be emphasized, even if it cannot be displayed in italics. Conversely, if the italics are purely ornamental rather than meaningful, then semantic markup practices would dictate that the author use the Cascading Style Sheets declaration font-style: italic; along with an appropriate, semantic class name instead of an i or em element.