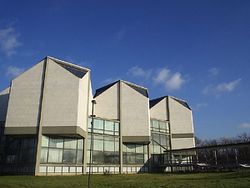 He made his studies in Belgrade from 1945 until he got his diploma in 1950. While studying he worked for the Ministry of Transportation and from 1950 until 1953 he worked for the "Jugoprojekt Office" where he met people like Stanko Kliska and Vojin Simeonovic (both famous architect in former Yugoslavia) where he learned the practical skills of his profession. After 1957 he started to make own projects and after that he joined the University of Belgrade Faculty of Architecture, in the beginning as an assistant later as a regular professor. He was Member of the Academy and his buildings are masterpieces of Serbian modern architecture: they are functional and aesthetic. Antic died in Belgrade in 2005.[1]

Some of his famous works are: