Chief Marshal of Aviation Ivan Kozhedub (Ukrainian: Іван Микитович Кожедуб; Russian: Иван Hикитович Кожедуб; June 8, 1920 — August 8, 1991) was a Soviet military aviator of Ukrainian descent[2][3] and a World War II fighter ace. Kozhedub took a part in the Korean War as a commander of the 324th Fighter Air Division. He is credited with 64 +2 (P-51) individual air victories, most of them flying the Lavochkin La-5 - the top scoring fighter pilot on the Allied side during World War II.[4][5] He is one of the few pilots to have shot down a Messerschmitt Me 262 jet.[6] He was made a Hero of the Soviet Union on three occasions (4 February 1944; 19 August 1944; 18 August 1945).

He was born in the village of Obrazhiivka, a settlement in the Sumy region in Ukraine during the Ukrainian War of Independence. He was the youngest of five children. For two years he attended a school for young workers, and in early 1940 graduated from the Shostka chemical technical school. Kozhedub learned to fly aircraft in the Shostkinsk aeroclub and joined the Soviet army in 1940. He graduated from the Chuhuiv Military Air School in 1941 at the start of the German invasion of the Soviet Union, but he was retained as an instructor.[7] Kozhedub remained at the school for two years where he trained many young Soviet pilots.

Feeling his talents would be better used in combat, he requested a transfer to an operational unit and in March 1943 was posted, as a Starshii Serzhant (Senior Sergeant), to 240th IAP, one of the first units to receive the new Lavochkin La-5.[7]

After his first military flight on 26 March 1943, he operated on the Voronezh Front and, in July over the Kursk battlefields. His first kill was a Junkers Ju 87 Stuka shot down during the Battle of Kursk on 6 July 1943. By 16 August he had claimed eight air victories. He was promoted to Mladshii Leitenant (Junior Lieutenant). Then his unit moved towards Kharkiv. At this time he usually flew escort for Petlyakov Pe-2 twin-engine bombers.[7] During World War II, he then served as a fighter pilot in several areas (Steppe Front, 2nd Ukrainian Front, 1st Belorussian Front) and at different ranks, starting from senior airman up to the deputy commander of the air regiment. He claimed his 61st and 62nd victories – his final claims – over Berlin on 16 April 1945.

Kozhedub holds the record for the highest number of confirmed air combat victories of any Soviet or Allied pilot (effectively the Allied "Ace of Aces") during World War II.[6] He is regarded as the best Soviet flying ace of the war, and is associated with flying the Lavochkin La-7. He was also reputed to have a natural gift for deflection shooting, i.e. aiming ahead of a moving target at the time of firing so that the projectile and target will collide.

In 1949 Kozhedub graduated from the Air Force Academy.

In April 1951, promoted to Polkovnik (colonel), he commanded the 324th IAD (Fighter Air Division) and dispatched to Antung airfield on the China-North Korea border to fly the MiG 15[6] during the Korean War supporting the North Korean forces. He was not given permission to participate in combat missions. Under his leadership the 324th IAD claimed 239 victories, including 12 Boeing B-29 Superfortresses for the loss of 27 MiG-15s in combat and 9 pilots.

In 1956 he graduated from the High Command Academy, after which he was promoted to General. From 1971 he served in the Central Office of the Soviet Air Force and from 1978 in the general inspection group of the Ministry of Defense of the USSR. He was made an Aviation Marshal in 1985.

Kozhedub was awarded the Hero of the Soviet Union with the Order of Lenin three times (1944, 1944, 1945), seven Orders of the Red Banner, two Order of Alexander Nevsky, two Orders of the Red Star, Order of the Patriotic War First Class, and numerous medals. He was promoted to his final rank of Marshal shortly before retirement.

File:Kozhedub2.jpg
Kozhedub near his La-5FN (#14) in 1944. He later passed the plane to Kirill A. Yevstigneyev. 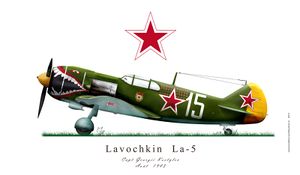 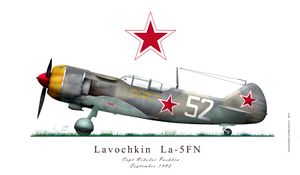 As with other famous figures, some myths have sprung up around Kozhedub's life. One story is that once he encountered a group of American B-17 Flying Fortresses under attack by Luftwaffe aircraft.[8] The story goes on to suggest that his aircraft was mistaken by American escort fighters for the enemy and attacked. Kozhedub, having no other option, defended himself by shooting down two of the P-51 Mustangs. So far, this story is not confirmed completely. Film footage exists that had been touted as Kozhedub's actual gun camera film from the event. However, it is highly suspect, as the footage was shot using Zeiss equipment, which was used primarily by the Luftwaffe, and the aircraft shown in the footage are shown with drop tanks attached. This would seem to contradict the story that Kozhedub was jumped by the P-51s, as the attacking fighters would normally drop these tanks before entering combat. A more likely story is that the gun camera footage was from a Luftwaffe aircraft which attacked American aircraft in an unrelated incident. However, another aircraft was shown without drop tanks, which can mean that the first pilot was unable or forgot to release his tanks, or perhaps even decided not to do so.

In his honor named a military university in Kharkiv, the Kozhedub University of the Air Force.