Ivan Mikhailovich Maisky (also transliterated as "Maysky"; Russian: Ива́н Миха́йлович Ма́йский) (19 January 1884 – 3 September 1975), a Soviet diplomat, historian and politician, served as the Soviet Union's Ambassador to the United Kingdom[1][2] from 1932 to 1943, including much of the period of the Second World War.

Ivan Maisky was born Jan Lachowiecki in a nobleman's castle in Kirillov, near Nizhny Novgorod, where his father was working as a private tutor.[3] His father was a Polish Jew, his mother was Russian. He spent his childhood in Omsk, where his father worked as a military doctor. As a student at St. Petersburg University, he was profoundly influenced by the writings of Sidney and Beatrice Webb. In 1902, he was arrested for his political activities, and sent back to Omsk under police surveillance. In 1903 Maisky joined the Menshevik faction of the Russian Social Democratic Labour Party. In January 1906 he was arrested for his part in the 1905 revolution and deported to Tobolsk. His sentence was later commuted and he was allowed to emigrate to Munich, where he obtained a degree in economics.

In November 1912, Maisky moved to London and shared a house in Golders Green with Maxim Litvinov and Georgy Chicherin. As his English improved his circle of friends expanded to include George Bernard Shaw, H.G. Wells and Beatrice Webb. After the outbreak of war in 1914, he supported the Menshevik Internationalists, who were opposed the war, acting as their main representative at a socialist conference in London in February 1915. This caused friction in his relationship with Litvinov, a Bolshevik, who supported Lenin's line policy of 'revolutionary defeatism'.

Maisky returned to Russia after the February Revolution, and served as deputy minister for labour in the provisional government of Alexander Kerensky. He opposed the Bolshevik Revolution, and as the Russian Civil War began, he moved to Samara, and in July 1918, became minister for labour in the rump of the provisional government, known as the Komuch, who backed armed resistance to the Bolsheviks, for which he was expelled from the Menshevik party. He had to flee to Mongolia when Admiral Kolchak imposed a military dictatorship in Siberia in 1919. In Mongolia, he wrote a letter to Anatoly Lunacharsky praising the "boldness and originality" of the Bolsheviks, as compared with the "virtuous but talentless" Mensheviks, and on Lunacharsky's recommendation was allowed to join the Bolshevik party, and posted to Omsk as head of the Siberian section of Gosplan.[4]

In January 1922, Maisky moved to Moscow as head of the press department of the People's Commissariat for Foreign Affairs (Narkomindel, now headed by Chicherin and Litvinov, where he met Agnia Skripina, his third wife, but later was posted to Leningrad, where, in January 1924, he was appointed chief editor of the literary journal Zvezda. Under his editorship, the magazine was the only major publication in the Soviet Union not controlled by the Russian Association of Proletarian Writers (RAPP) to encourage 'proletarian' literature, and have a representative of their movement on its board, while tolerating a range of critical opinion. Maisky personally tried to adopt a middle position between RAPP and their main opponent, Alexander Voronsky.[5] 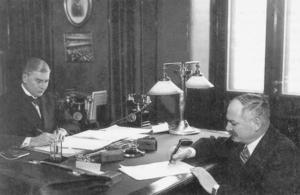 The signing of the Soviet–Finnish Non-Aggression Pact in Helsinki on 21 January 1932. On the left the Finnish foreign minister Aarno Yrjö-Koskinen; on the right the Envoy of the Soviet Union in Helsinki Ivan Maisky.[6]

In 1925, Maisky was appointed counsellor at the Soviet embassy in London, where he served during the turbulence of the Zinoviev letter, and the General Strike, acting up as de facto ambassador with the sudden death of the ambassador, Leonid Krasin, until he was forced to leave when Britain severed diplomatic relations with the USSR in May 1927. He was counsellor at the Soviet embassy in Tokyo in 1927-29. In April 1929, he became the Soviet Envoy to Finland. A close collaborator of Maxim Litvinov, Maisky was an active member and the Soviet envoy to the Committee of Non-Intervention during the Spanish Civil War.

In October 1932 he returned to London as the official Soviet ambassador to the Court of St James, as the post was and is titled. He held it until 1943.[7]

While Ambassador, Maisky addressed as many British audiences as possible in order to break through the air of hostility towards the Soviet Union at the beginning of the 1930s, a task which Litvinov “encouraged Maisky to undertake in every way possible.”[8] Robert Vansittart, a senior civil servant in the Foreign Office, arranged a diner at his home at which Maisky first met Winston Churchill. Later, after a state banquet in honour of King Leopold of Belgium, in the presence of King George VI and of Joachim von Ribbentrop, Churchill made a point of being seen having a long conversation of Maisky.[9] His position became increasingly difficult as the British government committed itself to Appeasement, and he was unable to get clear instructions about Soviet policy. After Litvinov was dismissed in May 1939, Maisky was almost the last exponent of a pact with Britain and France against Germany still in post, and was in effect prevented from speaking in public. Maisky stated: “Far from all the leading comrades' (including presumably Molotov) “realised the value of such speeches.”[10]

After the outbreak of the Second World War, Maisky dealt with a number of crises including intense British hostility towards the Soviets as a result of the Winter War with Finland.[11]

In 1941, after the German invasion of the Soviet Union, Maisky was responsible for the normalisation of relations with the Western Allies. Among other pacts, he signed the Sikorski-Mayski Agreement of 1941, which declared the Treaty of Non-Aggression Between Germany and the Union of Soviet Socialist Republics null and void.[8] It also normalised relations between the Soviet Union and the Polish government-in-exile and allowed for hundreds of thousands of Poles to be released from Soviet prisoner of war camps.

During these years in London, he reassured Joseph Stalin that Britain had no interest in signing a separate peace with Germany.[11]

Maisky must have been heartened when he visited one of his favourite restaurants in London at the time of the British withdrawal from Dunkirk. The proprietor's wife was in charge of the restaurant rather than the proprietor. When Maisky enquired about the proprietor she said he was at Dunkirk having sailed in one of the small ships for which the UK Government had appealed in extremely dangerous conditions to go to Northern France to evacuate the troops. Maisky was amazed at the answer which was he had gone to save the boys from the Germans. Maisky's reaction was 'It would not be easy to conquer such a people'.[12]

Maisky was also pressuring Britain to open a second front against the Germans in Northern France.[11] He maintained close contact with Winston Churchill and Anthony Eden and personally visited the Foreign Office every day to get the latest news.[13]

In July 1943, Maisky was recalled to Moscow 'for consultations'. That was, in fact, the end of his career as a diplomat. Maxim Litvinov was recalled to Moscow at the same time. Both men were awarded the rank of Deputy Minister for Foreign Affairs, but in Maisky's case particularly the title meant almost nothing. It is unclear why Stalin recalled them. Various theories are set out in J Holroyd-Doveton's biography of Maxim Litvinov.[14] The official reason, announced by Molotov, was that their recall was necessitated by the need for their advice in Moscow. There was a dearth in the Soviet Headquarters of men who would have the breadth of knowledge and experience which would qualify them to advise General Secretary Stalin on his relations with the USA and Britain.[15] Maisky believed they were recalled because of Churchill's letter of 5 May 1943 informing Stalin of the postponement of the Second Front until the Spring of 1944.[16] Maisky's wife agreed, as she told Jock Balfour's wife that her husband was recalled because Maisky failed to obtain a Second Front.[17]

Maisky led a number of commissions planning possible Soviet strategies for ending the war and for the immediate post-war world. Maisky's commission focused particularly on the dismemberment of Germany, heavy reparations (including forced labour), severe punishment of war criminals, and long-term Soviet occupation. He also recommended maintaining a "viable Poland," albeit with significantly modified borders. In terms of post-war planning, Maisky envisioned a Europe with "one strong land power, the USSR, and only one strong sea power, Britain." His concerns about what he perceived as American ideological hostility led him to see Britain as a more viable long-term partner because he believed they would be more conservative going into the post-war world. He anticipated a struggle between the two, which would push Britain closer to the Soviet Union.[18]

Unlike Litvinov and Gromyko, who also participated in the commission, Maisky foresaw the greatest danger to the Soviet Union would be US technology plus Chinese human numbers spearheaded against the USSR. The possibility of a war between Communist China and the Soviet Union might have seemed an attractive proposition to the USA and her allies. However, Nixon realised that such an eventuality would, in Kissinger's words, 'upset the global equilibrium.' Nixon took the most daring step of his presidency and told the Soviet Union that the USA would not stand idle if the Soviet Union attacked China.[19]

Maisky joined Soviet delegations to the conferences in Yalta and Potsdam.

After the Potsdam conference, Maisky was relieved of responsibility for reparations, and not given another assignment until March 1946, when he was made part of a team drawing up a diplomatic dictionary. At his own request, he was admitted to the Soviet Academy of Sciences to concentrate on studying history. He was sacked from the foreign ministry in January 1947, and was arrested on 19 February 1953, during the anti-semitic purge that peaked with the announcement of the so-called Doctors' plot. In custody, fearing that he might be tortured, he 'confessed' to having been recruited as a spy while he was stationed in Tokyo, and had then been recruited by Winston Churchill to spy for the UK.

He was saved from the threat of execution by Stalin's death, in March, when Lavrentiy Beria seized back control of the Ministry of State Security (MGB) and renounced the Doctor's Plot as a fabrication. But when Maisky was brought in front of MGB General Pytor Fedotov, who had been instructed to investigate Maisky's unlawful arrest, he feared a trap, refused to believe that Stalin was dead, and persisted with his story that he had been a spy. He did not back down until he had been put in a rest home, reunited with his wife, and shown film of Stalin's funeral.[20]

After a face to face meeting with Beria, Maisky was appointed Chairman of the Society for Cultural Relations with Foreign Countries - seemingly as part of a manoeuvre by Beria to wrest control of foreign policy from Molotov, who had regained his former position as Foreign Minister, and whose antagonism to Maisky was well known. As a result, Maisky was rearrested after Beria's fall from office in June 1953. This time, he refused to confess, and at his trial, in June 1955, was sentenced to the comparatively light term of six years exile. He was released two months later, when the new Soviet leader, Nikita Khrushchev, was due to meet Anthony Eden in Geneva. He was fully rehabilitated in 1960.[21]

After his release, Maisky went back to work in the Academy of Sciences, and was allowed to publish four volumes of memoirs. In 1955, however, he was released, cleared of all charges and fully rehabilitated. In 1966 Maisky signed the so-called "Letter of 25" Soviet writers, scientists and cultural figures, addressed to Leonid Brezhnev and expressing opposition to a possible rehabilitation of Stalin.[22]

However he remained loyal to Leonid Brezhnev and refused to have any sympathy with the dissidents of the late Soviet period. When, in 1968, Maxim Litvinov's grandson Pavel Litvinov with fellow students demonstrated against the Soviet invasion of Czechoslovakia, Maisky telephoned Maxim Litvinov's daughter Tanya who confirmed that it was true. Maisky was so shocked that he refused to have any further contact with the Litvinovs.[23]