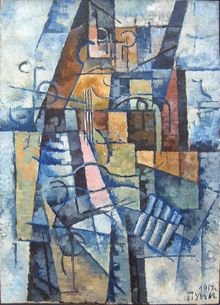 Ivan Puni was born in Kuokkala (then Grand Duchy of Finland in the Russian Empire, now Repino in Russia) to a family of Italian origins.[4] He is the grandson of an eminent Italian composer of ballet music, Cesare Pugni.

Puni received his formal training in Paris in 1910-11 at the Académie Julien and other schools, where he painted in a derivative fauviste style. Upon his return to Russia in 1912, he met, and exhibited with, members of the St Petersburg avant-garde, including Kazimir Malevich and Vladimir Tatlin. He made a second trip to Paris in 1914, returning to St. Petersburg in 1915. At this point, he began painting in a Cubist style reminiscent of Juan Gris. In 1915, Puni, (Aleksandra Ekster, Liubov Popova, Ivan Kliun, Ksenia Boguslavskaya, Olga Rozanova, Nadezhda Udaltsova, Nina Genke and others) formed Supremus, a group of artists dedicated to the promulgation of Suprematism, the abstract art movement founded by Malevich. Malevich and Puni co-authored the Suprematist Manifesto, published in 1916, which proclaimed a new, abstract art for a new historical era. Puni also organized the exhibitions Tramway 5 and 0.10, both held in St Petersburg in 1915, in which Malevich, Tatlin, Popova and others participated, and to which Puni contributed constructions and paintings. In 1915-1916 Puni, together with other Suprematist artists, worked at Verbovka Village Folk Centre. In 1919, he taught at the Vitebsk Art School under Marc Chagall.

Puni and his wife, Kseniya Boguslavskaya, emigrated from Russia in 1919, first to Finland, then in 1920 to Berlin, where the first exhibition consisting entirely of his work was held at the Galerie der Sturm. While in Berlin, Puni also designed costumes and sets for theatrical productions. Puni and Boguslavskaya relocated to Paris in 1924, where his style changed once again to a variant of Impressionism. In France, he signed his work Jean Pougny in an effort to distance his new art practice from his previous one in Russia. In 1946, Puni/Pougny became a French citizen. He died in Paris in 1956.